For all the prodigious scenic contributions of snow-mantled summits and vaulting forests, it’s freshwater—sloshing lakewater, reed-walled marshwater, gushing springwater, river flows that may be languid or lively—which truly anchors the Klamath County landscape. Getting out on the water here means getting into the heart of this sublime geography.

Given the variety and uniqueness of the region’s lakes, rivers, and wetlands, Klamath County ranks among the best destinations in the Northwest for water-based recreation. Read on for a grand tour of some of the possibilities in this department—and bear in mind as you do that we’re not even touching on the utterly world-class fishing the region offers! 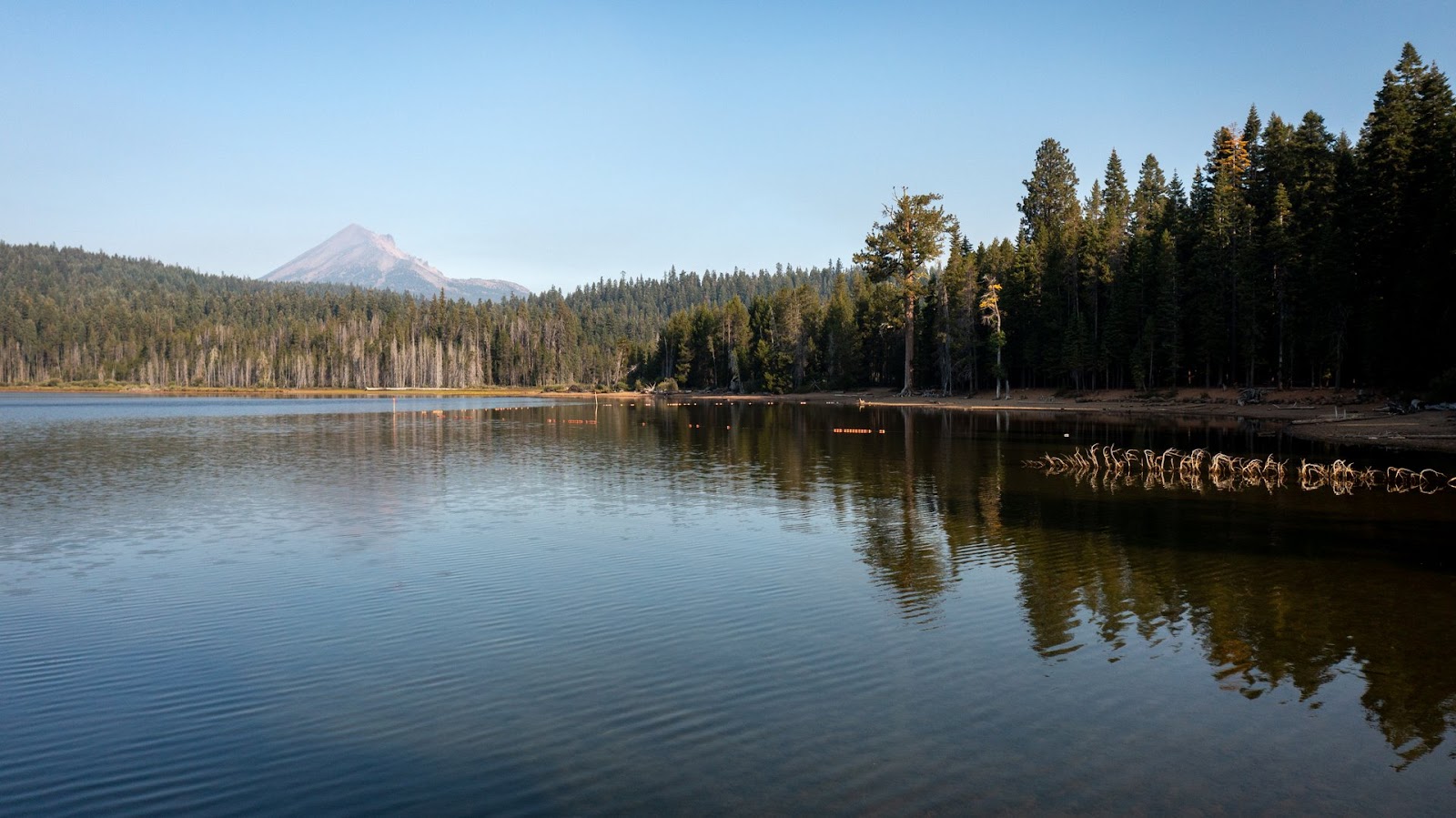 The placid waters of Lake of the Woods offer a fantastic place to paddle. Photo by Kamrin Nielsen

The Southern Cascades looming along Klamath County’s western reaches come sprinkled with high lakes of considerable beauty. None, of course, is so well known as Crater Lake, for which “considerable beauty” falls way short as a descriptor. While private watercraft aren’t allowed on this snow- and rain-nourished caldera lake—famous for its depth and dazzling clarity—boat tours in Crater Lake National Park give you the chance to ply one of the planet’s most flat-out gorgeous bodies of water.

Both motorized and non-motorized boating opportunities abound north and south elsewhere along Klamath County’s vast Cascade domain. Far up in the northwest near Willamette Pass, you can tool about twinned Odell and Crescent lakes in a motorboat or paddleboat, or go the kayak, canoe, or SUP route. Lake of the Woods makes one of Southern Oregon’s most beloved liquid playgrounds, where you can windsurf, water-ski, boat, and paddle under the watchful pyramid of 9,493-foot Mount McLoughlin. You’ll also nab views of that stunning stratovolcano from Fourmile Lake, set on the doorstep of the Sky Lakes Wilderness and another fine place for paddling or (respecting the 10-mile-per-hour limit) motorboating. 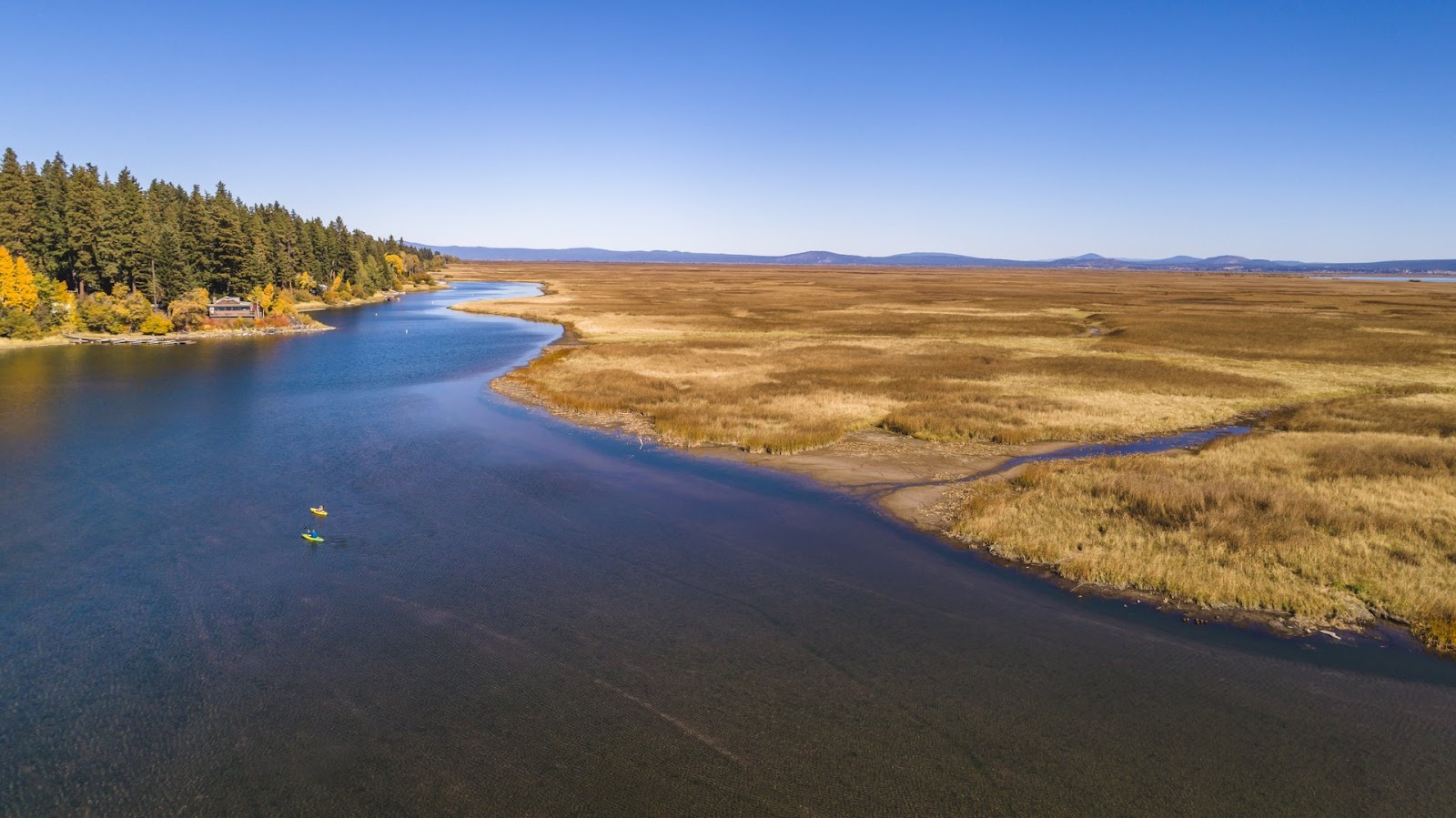 The sprawling beauty of the Upper Klamath Canoe Trail. Photo by Kamrin Nielsen

Oregon’s largest freshwater body provides the lowland counterpoint to Crater Lake when it comes to Klamath County’s defining waterscapes. A magnificent leftover from the vaster-yet Lake Modoc of Pleistocene vintage, Upper Klamath Lake sprawls across more than 60,000 shimmering acres. This lake serves as nearly as strong a magnet for outdoor recreationists as for the hordes of Pacific Flyway waterfowl, waders, and other birds that stage, winter, and nest here.

Upper Klamath’s generous proportions and breezes make it a primo destination for sailing. Paddlers can eat their hearts out as well, not least on the 9.5-mile-long Upper Klamath Canoe Trail, which explores the marshy fringes of Pelican Bay, Crystal Creek, and Malone Springs. This marked paddling route offers world-class birdwatching, especially from spring migration into the summer-nesting period. 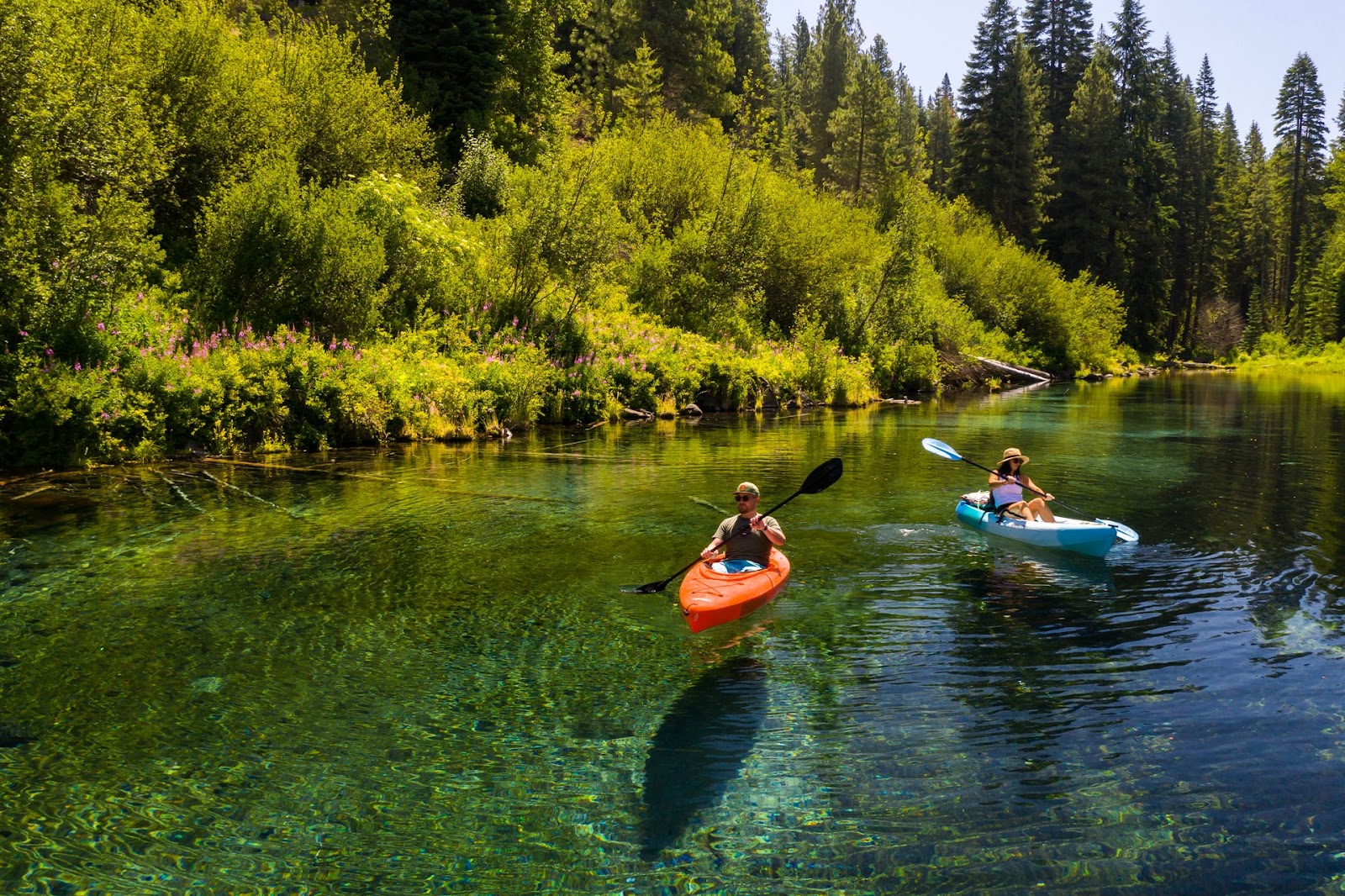 Kayaking the crystal clear waters of the Wood River. Photo by Kamrin Nielsen

Kayakers and canoeists have some of the Northwest’s most magical rivers (and most lauded trout streams) at their disposal in Klamath County. These include along the great feeder flows of Agency and Upper Klamath lakes. One classic float is on the spring-fed Wood River between Jackson Kimball State Park and the Wood River Day Use Area, cruising through riverbank groves of ponderosa pine and farmland above its mouth in Agency Lake.

To the east, the Williamson River—the main inflow for Upper Klamath Lake—provides fantastic paddling along its mainstem and tributaries. The Collier Memorial State Park Logging Museum offers a great put-in, with both upstream and downstream options for the crystalline Williamson tributary of Spring Creek to see the bizarre spheres of colonial “mare’s eggs” cyanobacteria piling the riverbed.

Paddlers can also explore tranquil stretches of the Sprague River and its tributary the Sycan, which drains another of the Klamath Basin’s precious wetlands, the Sycan Marsh.

If you’re hankering for a paddling experience of the more rip-roaring variety, the Upper Klamath River is your jam.

Below its Link River reach flowing out of Upper Klamath Lake through Klamath Falls, the Klamath turns westward to power its way through the Cascades. (The Klamath is, along with the Columbia and Pit, one of only three rivers that heads east of the Cascade Range and then crosses it en route to the Pacific.) Among the Northwest’s signature whitewater runs awaits in the Klamath’s gorge below the John C. Boyle Reservoir, extending down past the California border to Copco Lake. Gnarliest of the many impressive rapids staggering this run is the wild and wooly Class V corridor of Hell’s Corner. 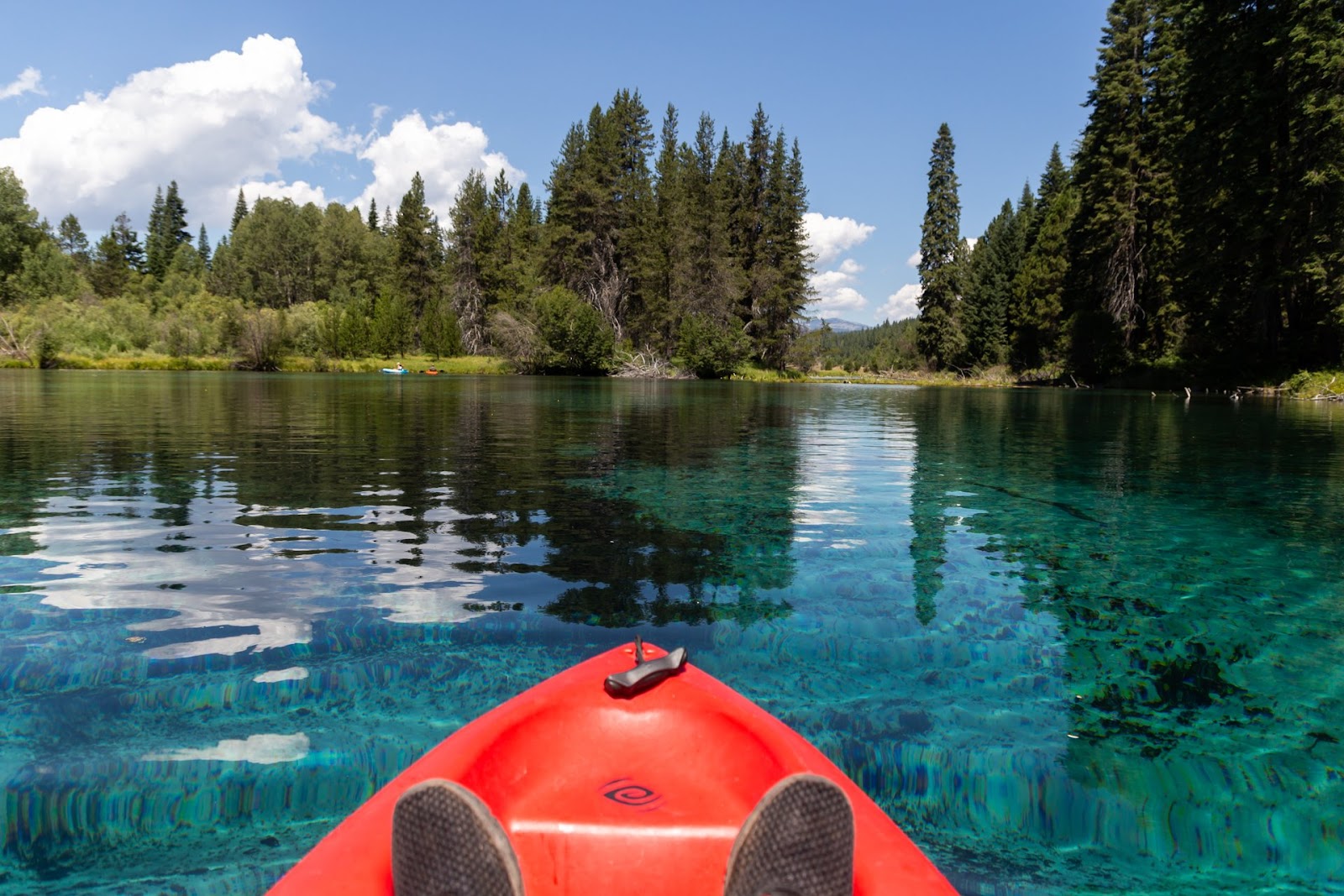 Kayaking the crystal clear waters of the Wood River. Photo by Kamrin Nielsen

Whether you’re pontooning, rafting, or stand-up paddleboarding, do your part to minimize your impact on the region’s waterways. Follow all rules pertaining to a particular body of water, including which kinds of watercraft are allowed and any speed limits on motorboats. Wash off your boat or board between jaunts to avoid transporting invasive aquatic species. Abide by Leave No Trace practices on the water, including seeking out durable bankside or shoreline surfaces for access and packing out all waste.

Give wildlife plenty of room while boating, and if you see an animal showing signs of distress—even if you’re maintaining what you think is a healthy distance away—move off from the area.