For many freshly minted retirees, travel’s high up there on the to-do list. Now that you’ve actually got some time on your hands, the open road—and all of those places you dreamed of visiting while chained to an unsympathetic workaday schedule—are calling loud and clear.

Klamath County makes a fantastic choice for your first post-retirement travel adventure. The scale, grandeur, and variety of natural scenery alone is a world-class draw: mirrored forest lakes, shining snow-covered peaks, pine-cradled rivers, vast wetlands filled with birds of every description. But beyond the sightseeing, there’s also some mesmerizing history, vibrant arts-and-culture, and some of the Northwest’s richest outdoor recreation and leisure opportunities.

Kick-off retirement vagabonding in style with a visit to Klamath County: 6,000 square miles of follow-your-bliss beauty. Here’s a starter pack of ideas for your itinerary. 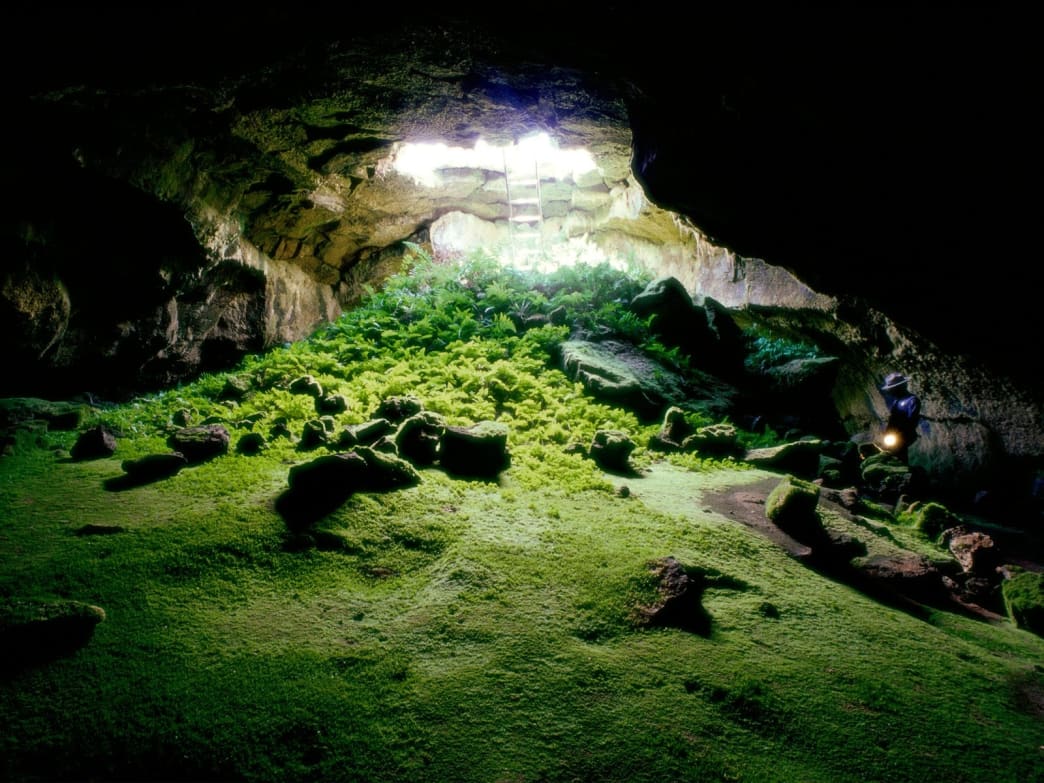 Some of the world’s most extraordinary volcanic landscapes await you in and around Klamath County. The roughly 500-mile-long Volcanic Legacy Scenic Byway, which weaves from Southern Oregon to Northern California, gives you an unforgettable road-tripping route right through them. The highlight is Crater Lake, that deep, crystal-clear, snowmelt-fed body of water perched in the blown-open gullet of Mount Mazama along the crest of the Cascade Range. Crater Lake can compete with any chunk of scenery on Earth, and is worth seeing even if you can only drive to the rim and take a quick gander.

It is recommended that you give yourself more time, though: Take the 33-mile Rim Drive around the caldera’s wall, join a boat tour out to Wizard Island, and tear yourself momentarily from the geologic majesty to admire the historic architecture of the Crater Lake Lodge.

Mount Mazama’s liquid crown isn’t the only dazzling volcano you’ll get to admire along this All-American Road: from Mount Thielsen’s lightning-rod fang and the burlier cones of Mount McLoughlin and Mount Shasta to the great shield of Pelican Butte overlooking Upper Klamath Lake, you’ll be spoiled for striking skyline sentinels. Throw in the lava tubes and caves of Lava Beds National Monument just across the border in California, and you’ve got an honest-to-goodness igneous wonderland at your fingertips along one of the USA’s standout scenic drives.

From the ancient rock art at Petroglyph Point in Lava Beds National Monument to the architectural landmarks of downtown Klamath Falls, thousands of years of multicultural history are yours to explore on a Klamath County trip. The traditional lands of the Modoc, Klamath, and Yahooskin peoples lie here, as do battlegrounds of the famous Modoc War—Fort Klamath includes the graves of Kintpuash, or Captain Jack, and three other Modocs executed at the close of the war. One of the major emigrant roads of the West is also here: the Applegate Trail.

First-rate museums such as the Klamath County Museum, the Favell Museum, and the Collier Memorial State Park and Logging Museum—which shows off an amazing collection of vintage machinery and tools tracking the history of lumbering in Klamath County—interpret the county’s backstory. It’s also tangible at sites such as the Linkville Pioneer Cemetery and the historic district of Klamath Falls, home to the Baldwin Hotel, the Goeller House, the Oregon Bank Building (complete with an elevator operator, still), and other striking old buildings.

Fairways to Fishing Holes: Get Some Fresh Air in Klamath County 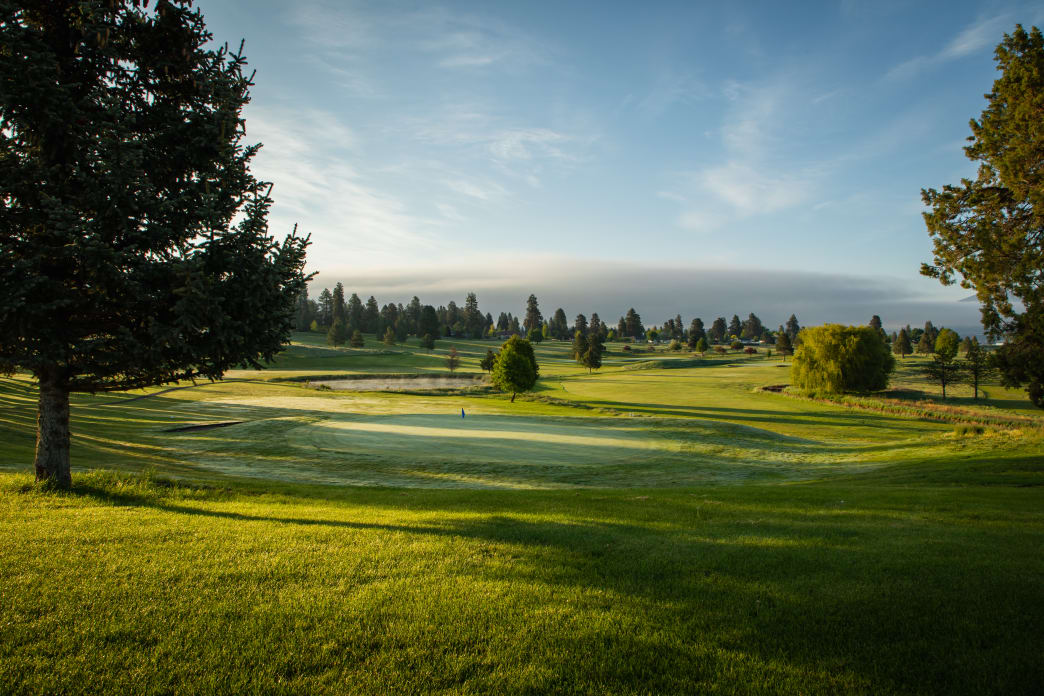 Hit the links, hike the trails, paddle the lakes, and watch the birds, so many birds. Discover Klamath

If chipping and putting are part of your M.O., you’ll find a nice selection of golf courses in Klamath County, including Harbor Links Golf Course, Shield Crest Golf Club, and the Arnold Palmer Signature Course at the Running Y Ranch Resort. Among an incredible mileage of county-spanning hiking trails, meanwhile, you’ll find many easy but spectacular routes, including the Pinnacles Hiking Trail in Crater Lake National Park, the easily accessible Klamath Wingwatcher’s Interpretive Trail along Lake Ewauna, and the Tomahawk Trail west of Klamath Falls, which delivers knockout views of Mount McLoughlin.

Whether you’re a casual or an obsessive angler, you’ll get to enjoy some of the best fishing opportunities in the country in Klamath County. Cast a line up in the Cascades at Fourmile Lake, Odell Lake, or Lake of the Woods, or experience some of the most legendary trout fishing on the continent in Upper Klamath and Agency lakes and the Williamson River.

The birdwatching around here, meantime, is similarly extraordinary: If you’ve got a life list going and never travel without binoculars, get ready to be bowled over. The Klamath Basin Birding Trail can fill your visit with feathered astonishments, including the Lower 48’s greatest share of wintering bald eagles and the waterfowl splendor of the Upper Klamath Basin, the “Everglades of the West.”

Feel like a night on the town? In Klamath Falls, you might consider taking in some onstage performances at the Ross Ragland Theater—the modern incarnation of the 1940-built, Art Deco Esquire Theater—or the Linkville Playhouse, the area’s most venerable community theater troupe.

Whether it’s volcanic vistas, birding safaris, or birdie exploits on the greens that have worked up your appetite, you’ll have much to savor on the culinary front in Klamath County, what with diverse eateries such as the Bakery & Chowder House, A Leap of Taste, Cowboy Dinner Tree, the Klamath Grill, Malin Country Diner, and Klamath Basin Brewing Co. on hand. 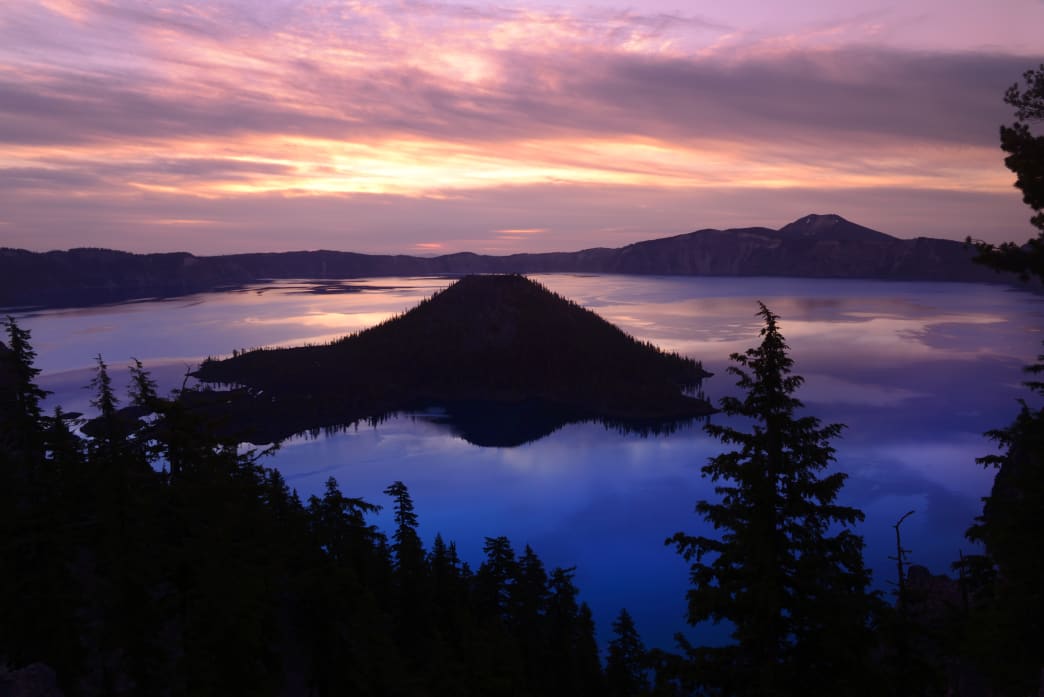 Don’t wait! Beautiful views along Volcanic Legacy Scenic Byway can be yours for the taking. Christian Heeb

Make that first trip after easing into the joys of retirement a glorious one: Come soak up all that Klamath County has to offer!