How (and Where) to Go Birding in Klamath County

If you’re an avid birder, you may well already know the quality of the birdwatching in Klamath County. After all, this is one of the best places in North America for birding, given that better than 350 species of that fabulous feathered tribe have been recorded within the county’s 6,100+ square miles.

The opportunities for birders here are year-round. But springtime especially, with the chill and snow of winter yielding to spring’s earthy scents and warm breezes, holds special allure. We’re at the tail-end of the residency of many wintering birds, not least of which is a nationally significant population of bald eagles. Spring migrants—from warblers and flycatchers to hordes of waterfowl and shorebirds—are journeying northward. Indeed, it’s estimated that 80 percent or so of the birds winging along the Pacific Flyway—the westernmost of the continent’s great avian migratory corridors—funnel through the Klamath Basin. And the nesting season starts to get underway with the lengthening days and balmier temperatures.

What can you expect to see, bird-wise, in this productive late-winter-through-spring window, and where should you steer your binocular-clutching self? Here, we’ll run through an overview of the avifaunal lay-of-the-land, then spotlight some of the particular birds enlivening it.

The Diversity of Klamath County Birding 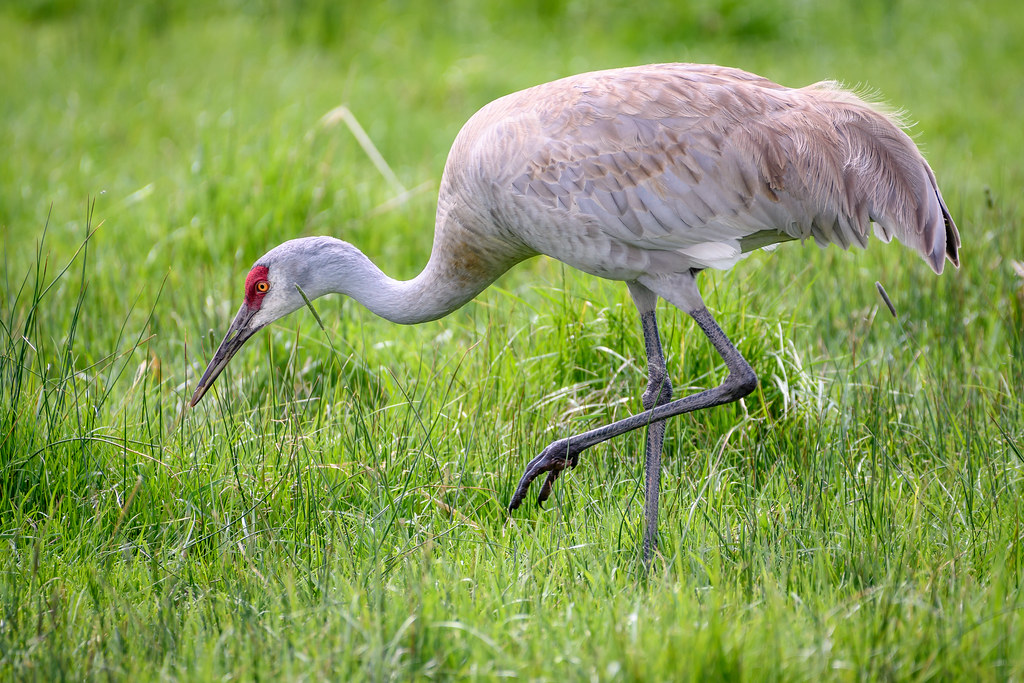 From bald eagles to sandhill cranes (featured above), Klamath County offers a world-class world for birding. Photo by Becky Matsubara

Klamath County owes much of the abundance and diversity of its birdlife to its physical and ecological geography. Stretching from the crest of the north-south-oriented Cascade Range eastward into the outskirts of the Basin-and-Range country, midway between the maritime Pacific realm and the shrub-steppe drylands of the Great Basin, it’s an auspicious biogeographic crossroads.

The huge sweep of land manifests in a rich tapestry of habitat for birds and other wildlife. There’s the alpine rubble of Cascade cones and the vast subalpine forests of mountain hemlock and red fir. There are dense lodgepole stands and airy ponderosa woodlands. There are juniper savannas, manzanita thickets, sagebrush-covered steppes.

And then, of course, there’s the extensive freshwater realm, which includes sprawling bulrush and cattail marshes, wet meadows, and both high and low elevation lakes—including the biggest natural lake in the Pacific Northwest!

That so much of this acreage is publicly accessible—from the Lower Klamath National Wildlife Refuge to the Fremont and Winema national forests—just adds to Klamath County’s appeal to birdwatchers, whether beginner, stone-cold veteran, or something in between.

From lingering “snowbirds” to springtime migrants and nesters, here’s a look at just a few particular birds (and bird groups) to seek out in and around the Klamath Basin this time of year. 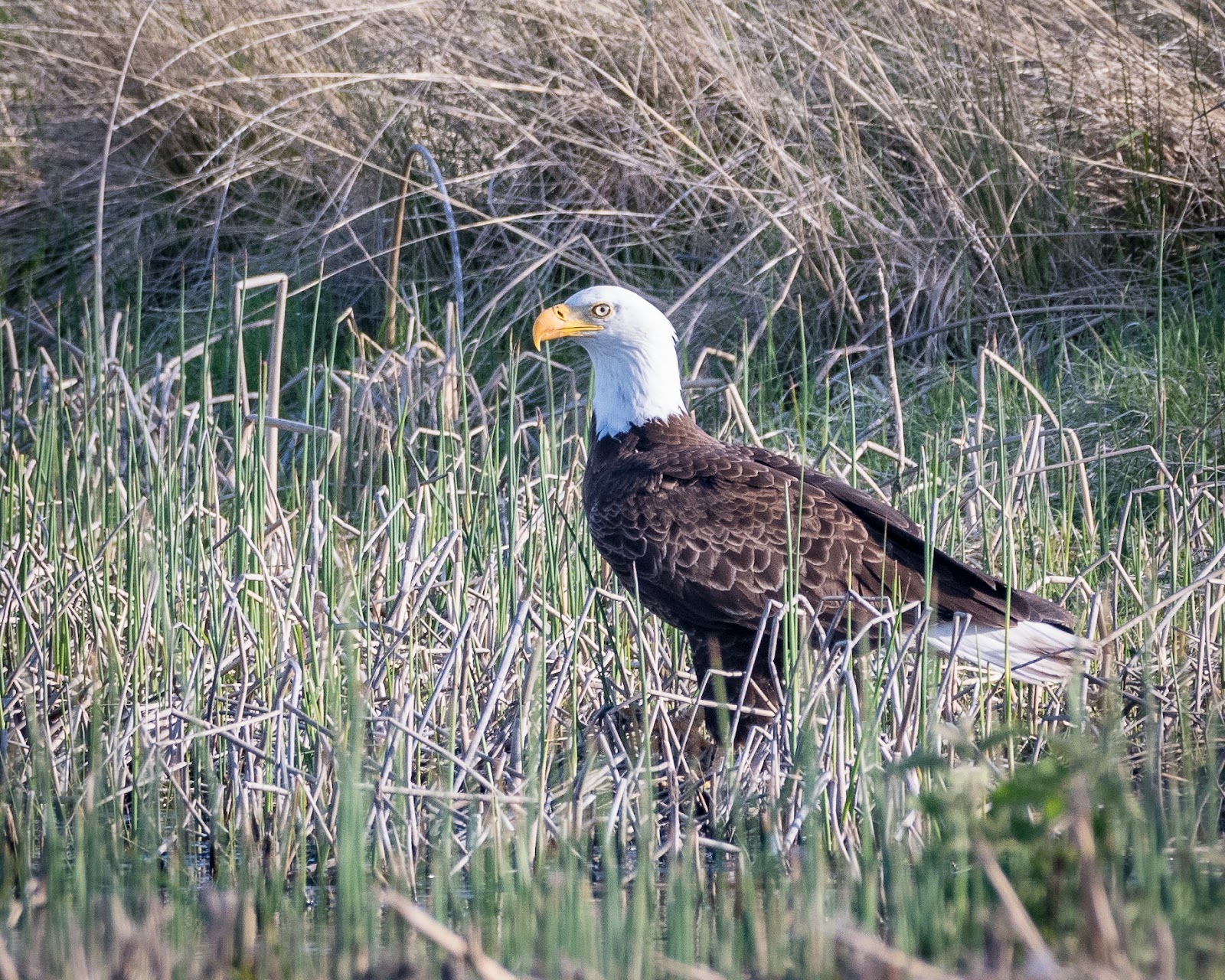 The Klamath Basin hosts more wintering bald eagles than any other corner of the Lower 48. These magnificent members of the sea-eagle clan make daily early-morning flights from roosts in Bear Valley National Wildlife Refuge to hunt waterfowl in Lower Klamath and Tule lakes to the near southeast. Many of these overwintering eagles disperse by March, but a good number of pairs nest in the Klamath Basin as well. 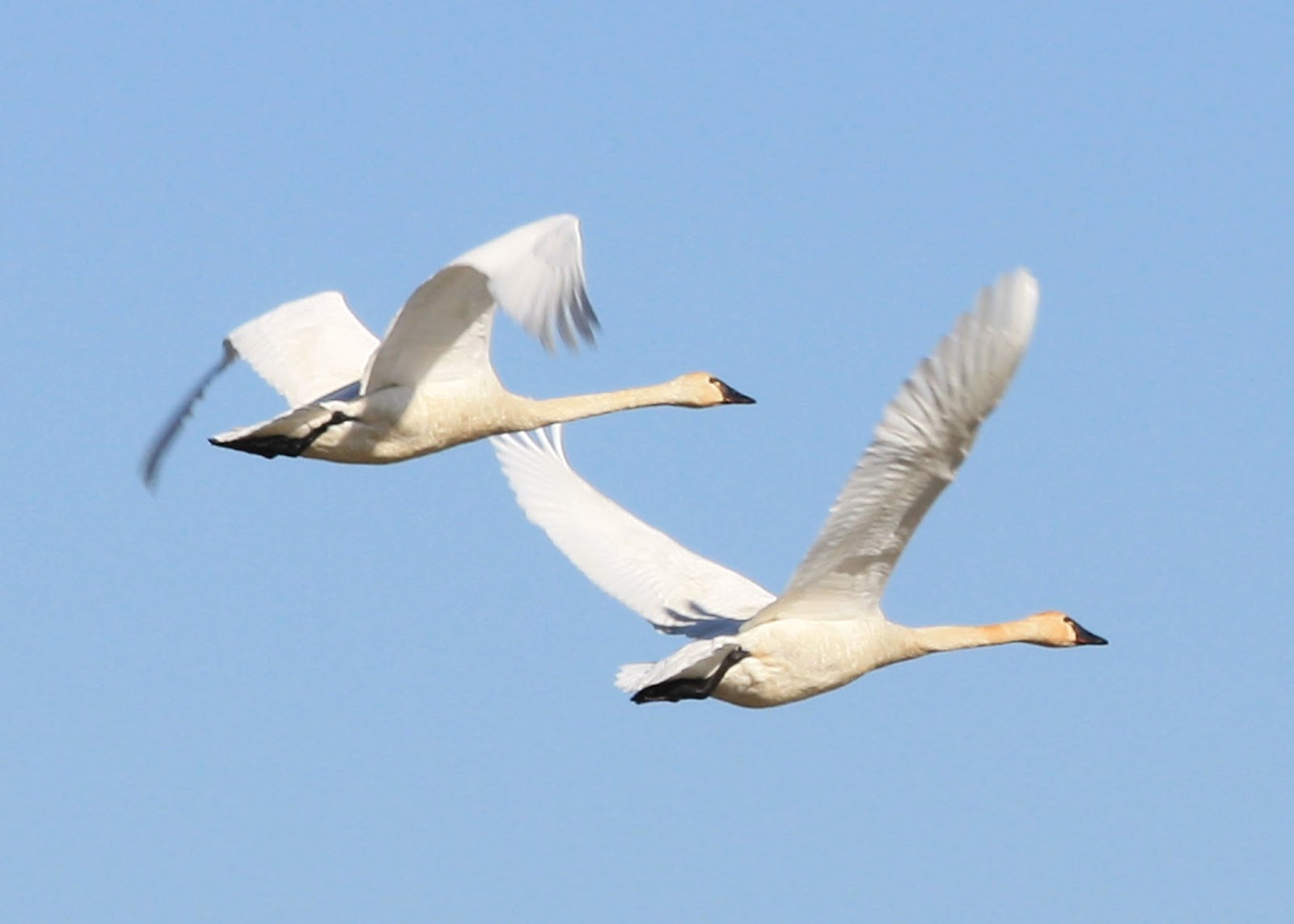 Klamath Basin’s wintering tundra swans into March, before they head for Arctic nesting grounds. These snow-white long-necks are also known as whistling swans, a name bestowed by Meriwether Lewis based on the sound of their wings. Droves of tundra swans forage in the Basin’s shallow lakes, marshes, and flooded fields, dabbling for vegetation and adding to the landscape’s soundtrack with whistling wings and (decidedly un-whistlelike) bleating honks.

The Geese of Spring

Among the most conspicuous—and noisiest—of the Klamath Basin’s springtime migrants are the great flocks of wild geese that stage here to one degree or another between late January and early May. These include two gorgeous white geese: the lesser snow goose and the smaller, stubbier Ross’s goose, which often intermingle. Like tundra swans, both are Arctic breeders that, with their snowy plumage, seem to evoke the high-latitude barrens where they summer.

Then there are the greater white-fronted geese, aka “specklebellies,” handsome gray geese for which the Klamath Basin lakes and wetlands serve as the single most important staging area on the Pacific Flyway. Some cacklers—those miniaturized Canada geese—also still pass through the Klamath Basin between California’s Central Valley and Alaska’s Yukon-Kuskokwim Delta, though cackling geese have increasingly been wintering farther north in the Willamette Valley and the Lower Columbia River.

Spring is prime time in the Klamath Basin for nabbing looks at the world’s most abundant crane. Klamath County is among Oregon’s standout strongholds for the sandhill crane, whose unmistakable, ratcheting rattle is right up there with a bull elk’s bugle and a gray wolf’s howl among clarions of the wild. These tall, gray birds, which fly in striking squadrons on high, can only be confused with a great blue heron when stalking around stubble fields or wetlands; key into the red spot atop the sandhill’s head and the pronounced, shaggy tailfeathers, which sort of call to mind Big Bird’s (just less yellow).

Several forms of sandhill migrate through the area between February and April on the Pacific Flyway, including the greater, the lesser, and the Canadian. And better than 60 pairs of greater sandhills—a significant proportion of Oregon’s population—nest in the Klamath Marsh National Wildlife Refuge beginning in the late spring. 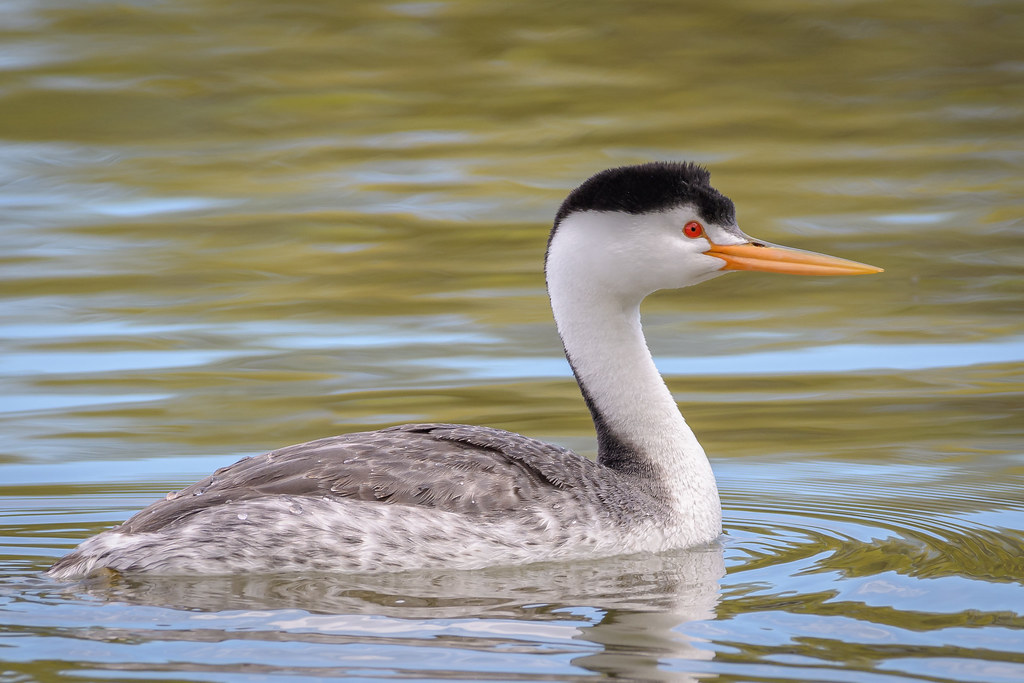 A Clark’s Grebe as seen from the peerless viewing spot of Putnam’s Point. Photo by Becky Matsubara

Many nesting pairs of the two largest North American grebes, the western and Clark’s, call Upper Klamath Lake home in spring and summer. These black-and-white waterbirds are spectacular species for birdwatching based on appearance alone with their graceful, slender form and piercing red eyes. (The black cap of the western grebe extends to form a mask around its eye, while white feathers encircle the Clark’s grebe’s eye.)

This routine, which peaks in late April through mid-May, involves male and female grebe upraised and skittering across the water like choreographed ballet dancers or figure skaters. There’s no better place to watch for this springtime dance-of-the-grebes than Putnam’s Point Park, situated at the base of Upper Klamath Lake in Klamath Falls.

The world-class birdwatching on offer amid the lakes and marshes of the Klamath Basin lowlands can overshadow the birding opportunities in the uplands and mountains, which are prodigious indeed.

Take owls for a case in point. Klamath County is a tremendous place to look for these soft-winged birds of prey, given the sheer number of species that reside here year-round. While great horned and barn owls are readily seen around the fields and wetlands, you’ll want to head for the montane forests to look for the owl most likely to stop you in your tracks: the astonishingly large and all-around arresting great gray owl.

The great gray owl is the tallest owl in North America, and it nests in lodgepole and mixed-conifer forests in the spring. Backroad and backcountry explorations of the Winema National Forest just might turn up a daytime glimpse of this unmistakable ghost.

For more information on birding your way through Klamath County, check out this Discover Klamath overview of year-round local birdwatching as well as our guide to the Klamath Basin Birding Trail, which includes numerous stops throughout the region’s varied habitats.