Favorite Lakes Near Klamath Falls to Play On

The Klamath Basin is filled with scenic spots to explore—and there may be no better way to experience the wilderness than from atop a stand-up paddleboard or the seat of a kayak. Certainly, the fishing in Klamath County is well known, but have you seen the sailboats racing across Upper Klamath Lake on a windswept afternoon? Easy access, warmer water, consistent conditions and nicer weather are also attracting windsurfers and kite boarders to Upper Klamath Lake. The area has a multitude of pristine waters for any water sport you are looking for, and with over 300 days of sunshine, plenty of great weather to do it in. Here are the top lakes near Klamath Falls to play on.

Lake of the Woods 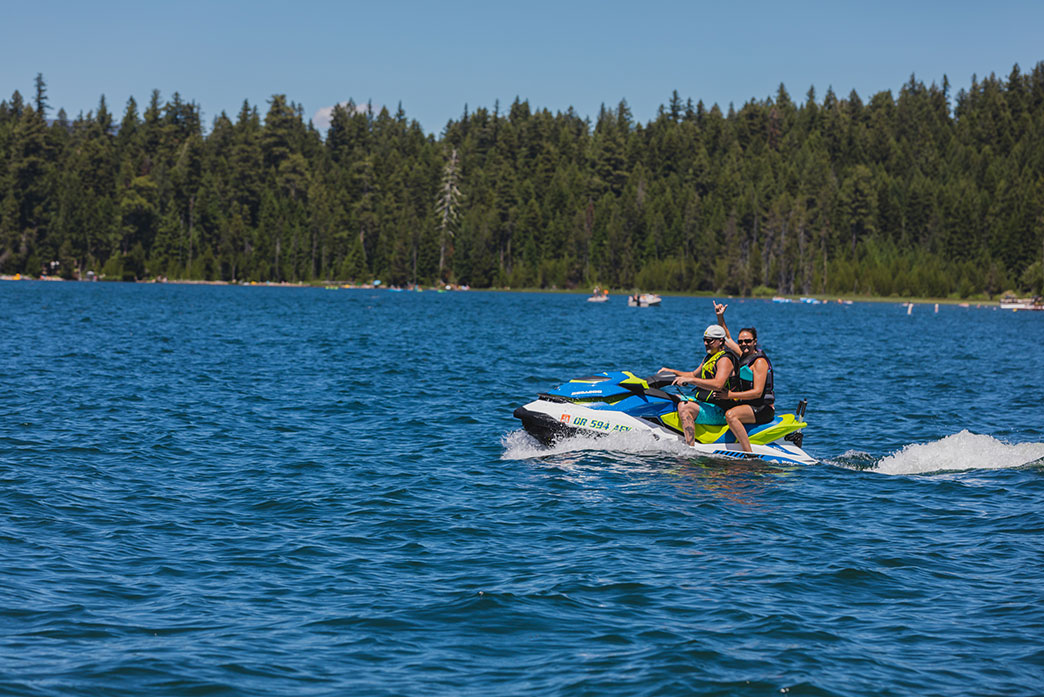 This couple is all smiles on their jet ski at Lake of the Woods.

Perhaps the region’s most popular spot for family vacations is Lake of the Woods Oregon, about 36 miles northwest of Klamath Falls near the crest of the Southern Cascades. Lake of the Woods Klamath Falls is one of the clearest natural lakes in the Cascade mountains. Lake of the Woods —which also offers cabins, RV sites, and campsites— has boat rentals of all kinds that visitors can rent to enjoy 1,250 acres of calm waters. From the water, paddlers will spot Mount McLoughlin, the highest peak in Southern Oregon, towering over the lake. Eagle-eyed paddlers might also see a variety of waterfowl and shore-bound wildlife, including deer, beaver, black bear, raccoons, and more. The lake itself is home to several species of bass, perch, salmon, and trout, making it a popular fishing destination, as well.

Diamond Lake isn’t the closest lake to Klamath Falls but it definitely offers a great place for a summer or winter time getaway as well as plenty of water recreation. Diamond Lake Resort started as a small fishing lodge built in the 1920’s and has transformed over the years into a modern family resort that is open year-round. In the summer Diamond Lake Oregon is a local’s favorite for fishing (rainbow trout), hiking, bicycling, and horseback riding. It is also just minutes from Crater Lake National Park’s north entrance (only open during summer months). Enjoy an abundance of fishing with many types of boat rentals to get on the water including patio boats, paddle boats and even bumper boats. Winter months Diamond Lake Resort is famous for skiing, snowmobiling, and snowshoeing. The resort also features a tubing hill with an uphill pulley system. 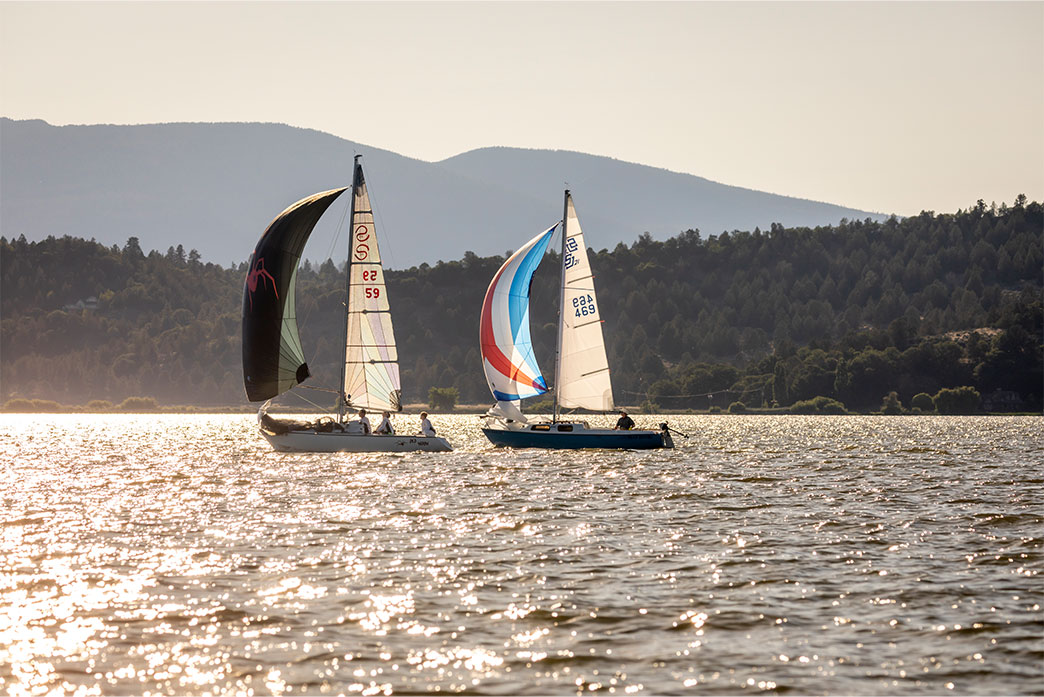 Water glistens during a sunset sail on Upper Klamath Lake.

Upper Klamath Lake is one of Oregon’s largest natural lakes covering over 140 square miles. Located right outside of the city of Klamath Falls, enjoy kayaking, canoeing, sailing, and more.

The Upper Klamath Lake is almost 30 miles long and up to eight miles wide and depths of up to 60 feet in some places, Upper Klamath Lake in Oregon is the largest freshwater body west of the Rocky Mountains. There may be no more iconic lake in Klamath County than Upper Klamath Lake. Upper Klamath Lake hosts a 9.5-mile marked paddling trail through a freshwater marsh in the Upper Klamath National Wildlife Refuge. The path winds through a mix of open water and forests of pine and aspen, with prime wildlife and waterfowl-watching opportunities all year long—especially during spring and fall migration season. The path is closed to motorized boats, which ensures a quiet, peaceful paddle, no matter how busy the area may be at any given time. 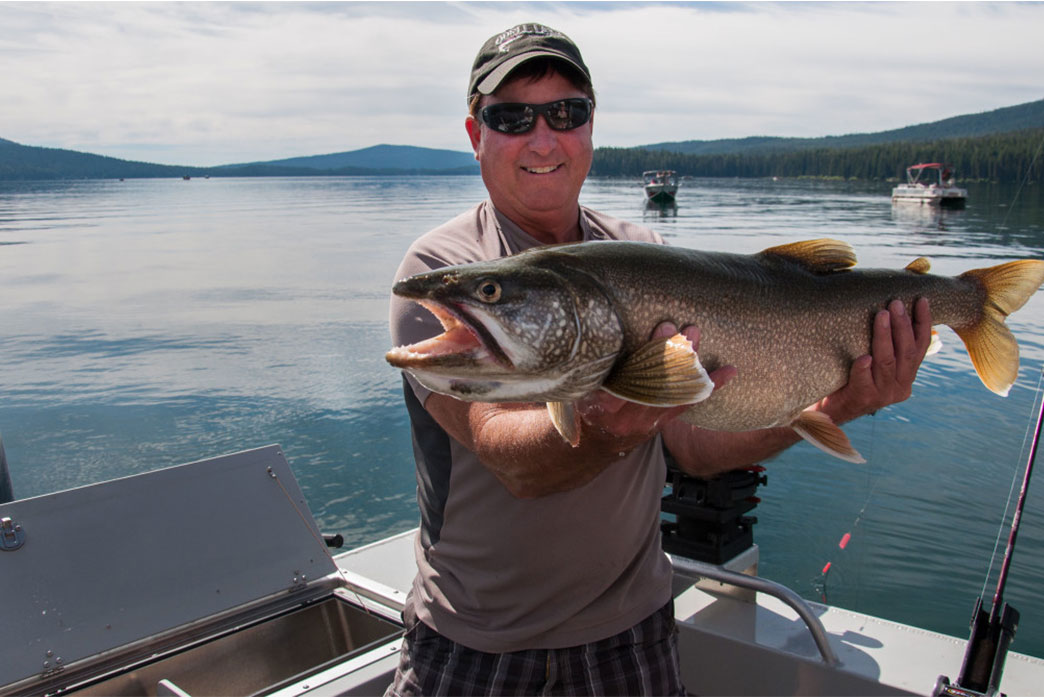 Check out this Mackinaw from Odell Lake!

The drive to Odell Lake takes about 90 minutes from Klamath Falls — so it’s not exactly a quick jaunt from town when looking for lakes near Klamath Falls Oregon — but most won’t mind the drive once on or by the water. That’s because Odell Lake sits in the heart of the Cascades, surrounded by the Deschutes National Forest, rolling hillsides, and the craggy Diamond Peak rising above it all. As if that weren’t enough, the six-mile-long lake is known for its clear, emerald-hued waters and is among the Cascades’ most popular destinations for anglers. At Odell Lake Oregon visitors will enjoy views from the water as they canoe, kayak or paddle board. Have some real fun with jet skis or paddle boats. Leverage the winds on a sailboat or try out kite boarding and windsurfing. If you’d like to stay a little longer, several developed campgrounds are located nearby including those at Odell Lake Resort and Crescent Lake area.

Fourmile Lake is a reservoir created by the 25-foot-tall Fourmile Lake Dam in the Klamath River watershed and offers a shoreline mixed with sand and pebbly rocks as well as stunning views of nearby Mt. McLoughlin. Enjoy the stunning landscape at this lake with a variety of water sport activities like kayaking, canoeing, and rafting. Fourmile Lake Oregon is a great day trip from Klamath Falls with the family and also offers dry camping.

Located in downtown Klamath Falls, Lake Ewauna is a popular viewing attraction in Klamath Falls. This lake is a stunning reservoir. The water flows from Upper Klamath Lake down into Lake Ewauna through the aptly named Link River, and then Lake Ewauna eventually drains into the Klamath River which empties into the Pacific Ocean off the coast of California. Lake Ewauna offers plenty of ways to enjoy the landscape from the water as well as the shoreline. Surrounding the lake is the Klamath Wing Watcher’s Lake Ewauna Nature Trail, perfect for bird watching year-round. Because this lake is so close to the city, a unique way to enjoy this lake is to book a trip to go kayaking with a local guide.