Klamath County Is Home To Over 350 Bird Species.

The Klamath Basin is unmistakably bird country. It is one of the top birding locations 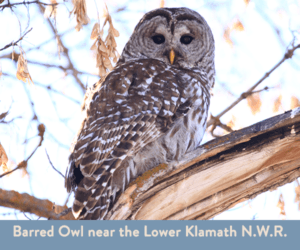 in the nation, and is one of the largest migratory stopovers for birds in the western United States.

Birding in Klamath is a year-round activity with natural high-elevation valleys surrounded by mountains. The region contains diverse habitats from desert lakes, wetlands and rivers to rain forests along the edges of the Cascade Mountain range making this area a birder’s paradise.

As a major waterfowl and wetland species nesting site, and stopover and wintering areas for various species, the Klamath Basin is located along the Pacific Flyway, the largest flyway in North America. In winter, you are likely to view the largest concentration of Bald Eagles in the lower 48 states.

Predictably you can see Tundra Swans, Snow Geese, Canada Geese, egrets, herons, hawks, owls, grebes, and many more at one or more of the six National Wildlife Refuges in our area. Be sure to bring your camera and binoculars to catch all the action.