On May 5, 1945, Reverend Archie Mitchell took his pregnant wife and five Sunday school 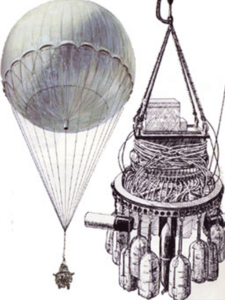 children, from the Christian and Missionary Alliance church where he was a minister, on a picnic and fishing trip. The group found a logging road they followed until a blockage hindered their progress. They stopped next to Leonard Creek, eight miles east of Bly, Oregon, near Gearhart Mountain. While unloading the vehicle, the Reverend heard one of the children say “Look what I found!” His wife, Elise, and the children ran to see what had been found. Moments later, there was an explosion. Mrs. Mitchell and all five children were killed instantly.

Between November 1944 and April 1945, Japan launched more than nine thousand balloon bombs – experimental weapons intended to kill and cause fires. The balloons, each carrying an anti-personnel bomb and two incendiary baombs, took about seventy hours to cross the Pacific Ocean. Three hundred sixty-one of the balloons have been found in twenty-six states between Canada and Mexico.

A front-page story in the May 7, 1945, Klamath Falls Herald and News provided no information, as was normal governmental protocol for news during this time in history.

The Mitchell Monument site was originally owned by Weyerhaeuser. The company built the monument in 1950 to commemorate the only place on the American continent where death resulted from enemy action during World War II. Weyerhaeuser donated the monument along with the land surrounding it to the Fremont National Forest in 1998.

The Mitchell Monument is located about 65 miles North-East of Klamath Falls. The recreation area is typically open from mid-May through the end of October. The site offers fishing, hiking, and wildlife viewing opportunities in addition to being a historic landmark.