It’s no exaggeration to say that Klamath County offers some of the best fishing opportunities in the western U.S—heck, the country as a whole. After all, this huge and diverse corner of Oregon, stretching from the crest of the Southern Cascades to the edge of the Great Basin, harbors nearly 200 square miles of water. That liquid footprint includes the mighty lakes, wetlands, rivers, and sloughs of the Upper Klamath Basin, renowned as “the Everglades of the West” and one of the best places anywhere to cast for trout, bar none.

The quality of Klamath County’s fisheries, the splendor of the landscape, and the abundance of recreational sites, guide services, and accommodations draw both newbie and pro-level fisherfolk—and that includes family units. Whether you’re introducing kids to the practice and pleasure of fishing or they’re already budding anglers, Klamath County is a wonderful place to spend some quality time together in the great outdoors and to celebrate the beauty of the sleek, the shiny, and the finned.

Here’s a roundup—in no particular order—of some of the very best places for families to drop a line in the big backyard of Klamath Falls.

1. Lake of the Woods 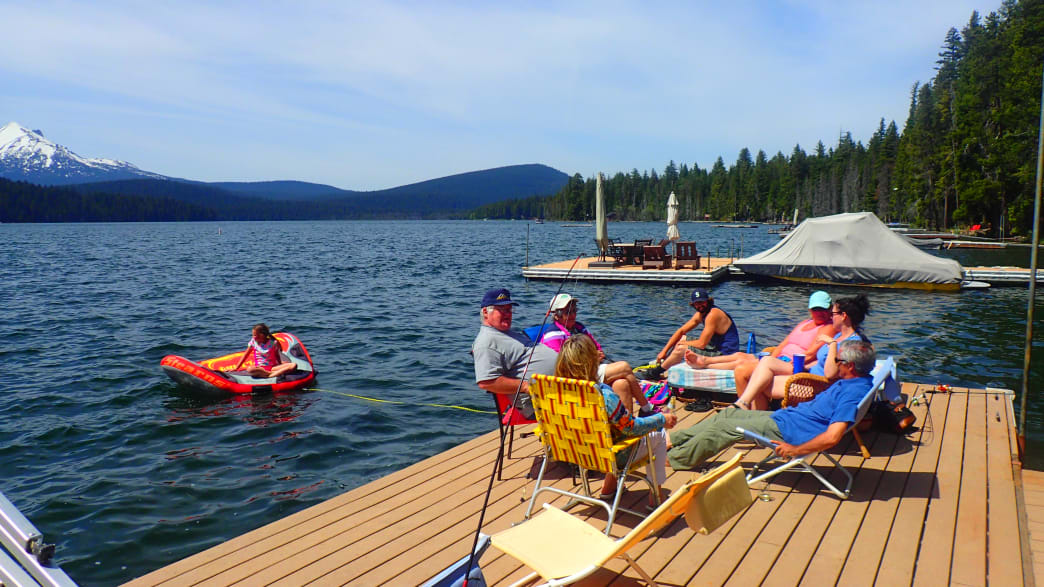 Family-friendly fishing and a large variety of fish can be found at Lake of the Woods. Discover Klamath

Nestled in the conifer forest of the Cascade Crest between lava-aproned Brown Mountain and the peaks of the Mountain Lakes Wilderness, Lake of the Woods is a beloved outdoor destination offering some of Klamath County’s finest family-friendly fishing. Its waters come stocked with rainbow and brown trout as well as kokanee (the landlocked form of sockeye salmon), and also support largemouth and smallmouth bass, yellow perch, crappie, and bullhead.

The setting’s postcard-perfect, and meanwhile you and the gang have the amenities and lodgings of the Lake of the Woods Resort (which offers boat rentals, by the way) plus a couple of campgrounds to take advantage of. Heads up: Come winter, Lake of the Woods is also an awesome spot to show the kiddos the ropes of ice-fishing. 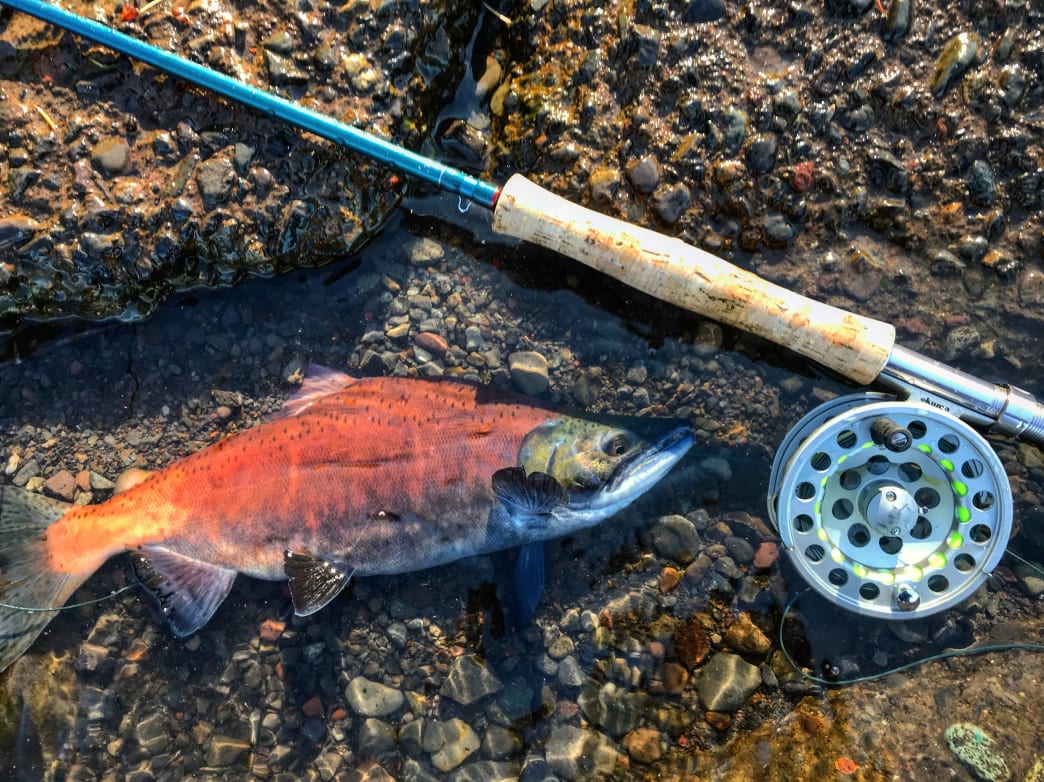 In addition to rainbow trout, both Odell and Crescent lakes are home to harbor lake trout, found in only a few bodies of water in Oregon. Discover Klamath

North of Lake of the Woods along the green backbone of the Cascades in the far northwestern corner of Klamath County, Odell Lake and its twin to the immediate south, Crescent Lake, are equally coveted family fishing hotspots—even if your kids aren’t likely to know about the old, fish-focused computer game Odell Lake, inspired by this very real place and lodged firmly and fondly in the memories of more than a few children of the ‘80s.

Both Odell and Crescent, which occupy glacier-carved basins, are among the few water bodies in Oregon to harbor lake (or mackinaw) trout; the state record, in fact—a 40-pound monster—came out of Odell’s depths. You’ve also got rainbows, kokanee, and mountain whitefish to reel in.

Similar to Lake of the Woods, Odell and Crescent lakes appeal to families not only on account of the topnotch fishing but also the availability of resort accommodations and dining; you can also camp here. And you can’t beat the sunrise light on 8,744-foot Diamond Peak, visible to the near west from both lakes.

Set at the northeastern foot of Mount McLoughlin—the nearly 9,500-foot stratovolcano cone providing one of Klamath County’s scenic linchpins—Fourmile Lake is another easily accessible highland fishing hole. It’s also another of the rare lakes with “lakers,” and you’ll also find good casting for rainbows, brookies, and kokanee. Lake frontage is entirely managed by the Forest Service and as such Fourmile offers primo bank-fishing, making it well suited for kids just getting the hang of lines and lures.

Hit Fourmile up for a day trip out of Klamath Falls or pitch a tent at the Forest Service campground here, with s’more-making around the fire to follow up the fishing.

These vast, glittering waterways giving rise to the Klamath River, which are right at the doorstep of Klamath Falls, are legendary for their heavyweight redband trout, an interior form of rainbow. Nourished by the productive food web of Upper Klamath and Agency lakes and finding both cool summertime sanctuaries and spawning grounds in their feeder streams, Upper Klamath redbands reach epic proportions: 30-inchers are not uncommon, and the record catch here—37 inches long—tipped the scales at more than 25 pounds.

The main fishing for redbands in Upper Klamath and Agency lakes is spring and fall, as the fish are mostly in rivers and creeks in summer and winter. There are many guides and outfitters to help you and the crew maximize your chances of hauling in one of these esteemed fish—and, ideally, releasing it after suitable oohing-and-aahing. 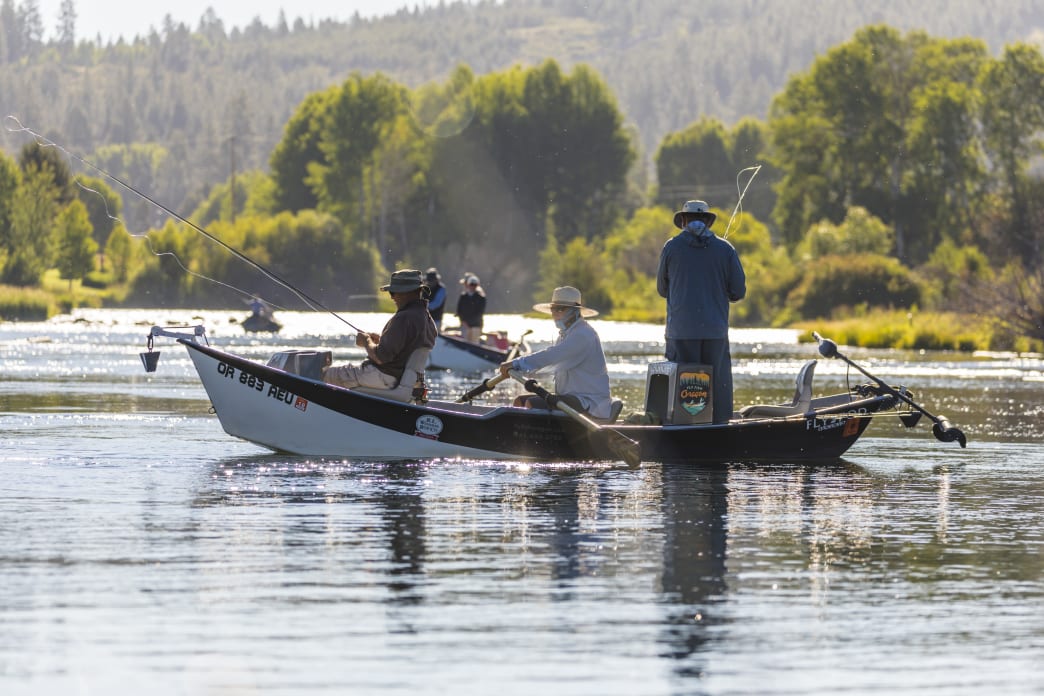 The trout in Williamson River can be wily, so it’s a good spot to bring older kids who have more experience in angling. Discover Klamath

One of two major inflows feeding Upper Klamath Lake, the Williamson holds its own with any of the great trout rivers of the West. Those Upper Klamath redbands spend a lot of time in the Williamson, where you can spincast and fly fish for them on a catch-and-release basis between spring and fall. The river’s hugely productive, but the prized trout are wily; the challenge makes the Williamson particularly suited for families with kids more experienced in angling, and perhaps looking to hone their skills in fly fishing. Tapping the local know-how of a guide is also a smart way to go for the Williamson.

Although much of the fishing on the lower Williamson is done by drift boat, you can find good bankside opportunities at the riverfront park in Chiloquin as well as just a bit upstream at Collier Memorial State Park—where the kids can also get a fascinating look at Klamath County’s logging heritage, to boot!

Start planning your Klamath Falls family fishing getaway today: Learn about the most productive Klamath County fishing holes and boost your chances on the water by checking out some top local fishing guides and outfitters.