The story of the Klamath region can’t be told without a nod to its volcanic past. Mount Mazama erupted nearly 8,000 years ago, which led to the formation of Crater Lake—and, further south, lava flows dating back almost 70,000 years formed the landscape at the heart of the modern-day Lava Beds National Monument. In between, centuries of lava flows and eruptions left the region pockmarked with pumice plains, cinder cone crags, and other explosive landscapes.

Today, it’s easy to see the lasting effects of all that activity along the Volcanic Legacy Scenic Byway. One of the country’s most beautiful drives, the route takes motorists more than 500 miles from just south of Chemult, Oregon, into California and Lassen Volcanic National Park. Roughly 140 miles of the byway wind through Klamath County, which makes for an ideal one- to four-day trip. In Oregon, the byway can roughly be divided into two sections: the 80-mile Upper Klamath Lake and Klamath Falls region, which can be driven year-round, and the 60-mile Crater Lake region, best explored in the summer. Both are filled with natural wonders that are unique to this part of the country—and the world for that matter. So pack the car and get ready for an unforgettable road trip, starting with the fifth oldest national park in the U.S.

The Volcanic Legacy Scenic Byway starts where Oregon Highways 97 and 138 meet. Start by driving west, where you’ll see Mt. Thelsen towering to the north and Mt. Scott in the distance toward the south. It’s only a 20-minute drive until you reach the northern entrance to Crater Lake National Park, which serves as the ideal starting point for the trip.

The massive eruption of Mount Mazama left behind what’s known as a caldera, a large cauldron-like hollow that remains after the explosion. Before the event, the mountain stood over 12,000 feet. After the eruption, it was reduced to about 8,000 feet of elevation. Over thousands of years, the huge hole that remained filled with water, creating Crater Lake. It’s the country’s deepest lake at 1,949 feet, filled completely from precipitation and snowmelt. In addition to its size and high altitude (the lake itself sits at 6,187 feet, but the surrounding rims rise to about 8,000 feet), Crater Lake is known for its striking blue color.

No trip to Oregon’s only national park is complete without a loop around the 33-mile Rim Drive, which encircles the lake. Dozens of pull-outs offer easy access to trailheads and viewpoints with sweeping views of the Phantom Ship, Wizard Island, and other landmarks. The entire road is generally open to vehicles and cyclists between June and October—and to cross-country skiers and snowshoers whenever the snow falls.

If you’re looking to stretch your legs, the park hosts more than 20 miles of hiking trails. Popular treks include the easy, mostly flat 2-mile round-trip hike to Plaikni Falls and the 1.6-mile round-trip ascent up Watchman Peak (it features sweeping views of Wizard Island, a cinder cone near the lake’s western shore). Those looking for a more strenuous trek can make the 3.6-mile, round-trip hike to Garfield Peak, which rewards hikers with some of the best views in the park, both of Crater Lake and the surrounding peaks. 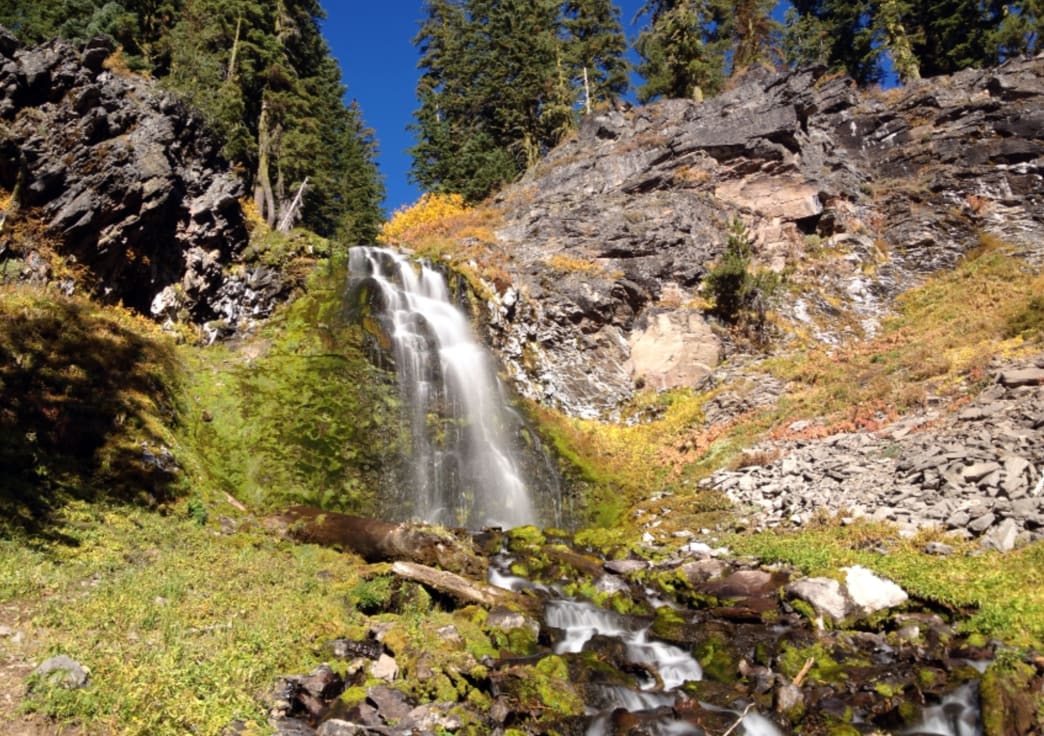 Between July and September, visitors can descend the Cleetwood Cove Trail to the shore of Crater Lake for a boat tour—the only opportunity for getting onto the lake itself. Visitors can choose between interpretive lake tours—with information on the lake’s signature hue and the area’s volcanic history—or a ride to Wizard Island for hiking, sightseeing, and swimming. Of course, you can do both, as one boat trip includes both the interpretive tour and a stop at the island.

And if you’re looking to stay overnight, the park is home to the 71-room Historic Crater Lake Lodge. It dates back to 1915 and overlooks the lake at Rim Village. Another option is the 40-room Cabins at Mazama Village, which is roughly seven miles south of the lake. For those who want to rough it, two campgrounds are nearby: Mazama Campground offers 214 tent and RV sites seven miles south of the lake, and Lost Creek Campground hosts 16 sites along Pinnacles Road.

Just across the state line in California, Lava Beds National Monument sits amid a landscape that took shape over the course of several millennia. Flowing lava in the area began to cool between about 70,000 years ago, forming a series of underground lava tubes. Today, the monument is famous for its cinder cones, craters, and more than 700 caves—many of which visitors can explore.

If you’re new to caving, consider the lighted, 770-foot Mushpot Cave, which includes interpretive panels that explain cave formation, ecology, and the underground climate. The 1,635-foot Valentine Cave, which offers large main passages and smooth floors, is another great option for beginners. The moderately challenging Golden Dome Cave appears to host a gold ceiling—the byproduct of light that reflects off water droplets formed on hydrophobic bacteria.

Other attractions of the park include hiking trails and viewing Native American pictographs. In the area known as Petroglyph Point, you’ll find more than 5,000 individual carvings that were made over the past 6,000 years. It’s the largest collection of Native American rock art in California. The monument also hosts special events throughout the year, from living history demonstrations to nighttime stargazing.

Visitors can stay overnight at the Indian Well Campground, which hosts 43 tent and (small) RV sites, on a first-come, first-served basis. The monument is open year-round, but keep in mind that daytime temperatures can reach 100 degrees or more during the warmest summer months. (That said, the underground lava tubes remain cool all year long—roughly 55 degrees—so be sure to bring a jacket.) Flashlights are available to borrow whenever the visitor center is open, but bring an extra flashlight or headlamp to be safe.