Everything You Should Know About Caving at Lava Beds National Monument

Only about 30 miles south of Klamath Falls, Northern California’s Lava Beds National Monument surely ranks among the hidden gems of the U.S. National Park System. Encompassing part of the northern shoulder of the mighty Medicine Lake Volcano—more voluminous than any Cascadian fire mountain—the monument is perhaps best known for its historical and cultural significance with regard to the native Modoc people, and for its proliferation of lava-tube caves.

In fact, no other corner of the continental U.S. boasts as many such cave features as Lava Beds, where the austere and beautiful above-ground landscape is more than matched in intrigue by what lies under the surface.

Let’s slip below that rugged scabland surface and explore the monument’s extraordinary subterranean realm, yours to experience firsthand on a getaway to nearby Klamath County. 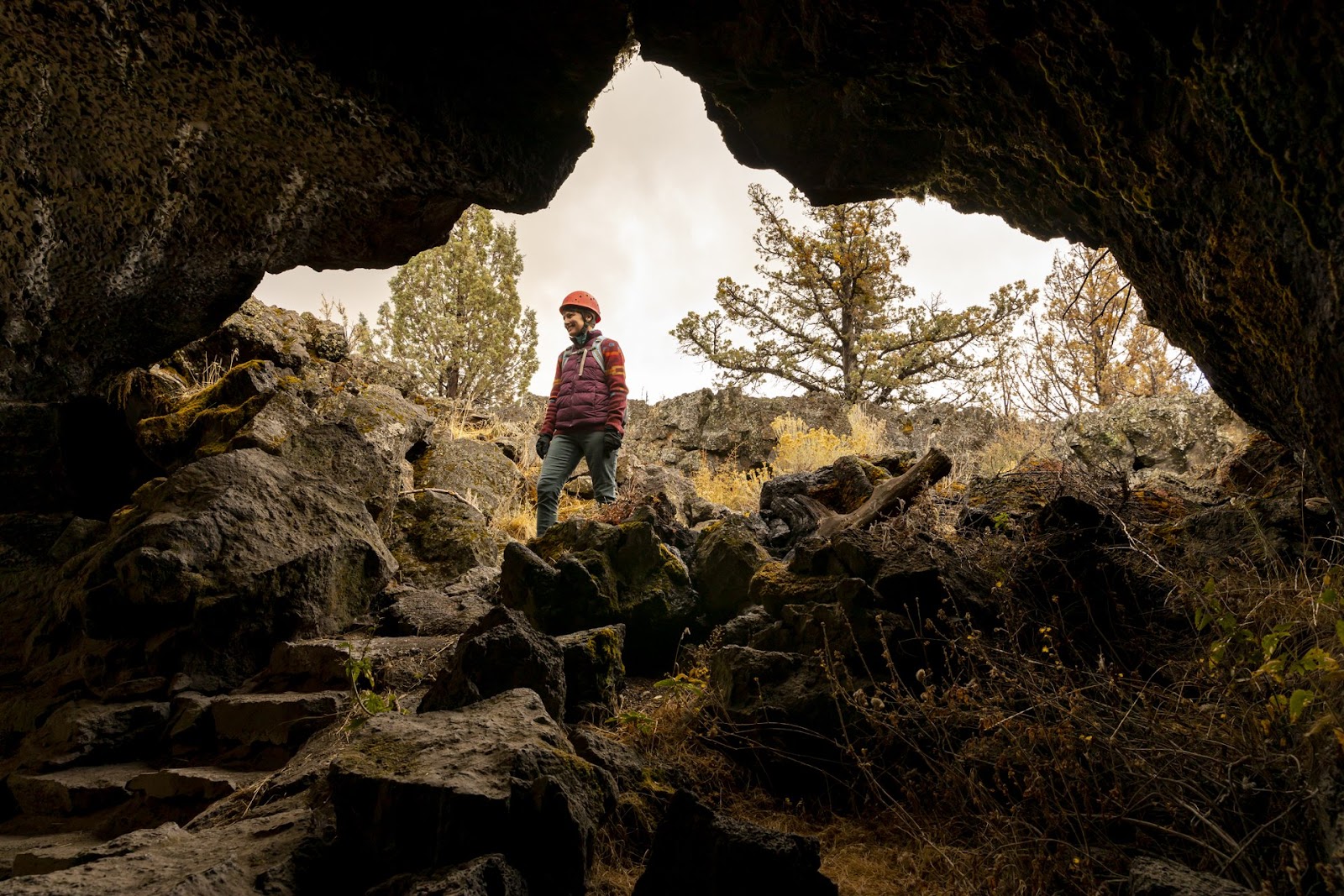 No other corner of the continental U.S. boasts as many such cave features as Lava Beds. Photo by Kamrin Nielsen

Covering better than 800 square miles along the borderland of the Cascades and the Basin-and-Range, the Medicine Lake Volcano encompasses 140 or more cubic miles of lava. That means this vast shield volcano, despite its subtle topographic footprint, out-bulks the more dramatic edifice of Mount Shasta snazzing up the Lava Beds National Monument horizon.

Most of the Medicine Lake Volcano is basalt, and most of that basalt belongs to a particular geologic unit known as the Basalt of Mammoth Crater. It’s within this roughly 35,000-year-old basaltic spewage that the vast majority of Lava Beds National Monument’s 800-plus lava-tube caves are found. These underground portals form as molten lava surging through conduits within the cooled crust of lava flows drains away after an eruption, leaving hollow arteries within.

Fascinating features within these caves range from dripstone formations, lava benches, and pillars to lavacicles (created from solidified lava drips on cave ceilings), lava cascades (where lava flows made a steep descent), and rafted lava blocks, which in places clog up as “floor jams.” Sections of collapsed roof serve as handy entrances to the caves.

Of the hundreds of lava-tube caves in the monument, two dozen are open for exploration as “visitor-use caves.” These range from electrically lit, wide-open corridors just about anybody can feel comfortable foraying through, to dark, rugged, primitive tunnels only experienced and physically fit visitors should consider entering.

Some Standout Caves to Explore in Lava Beds National Monument 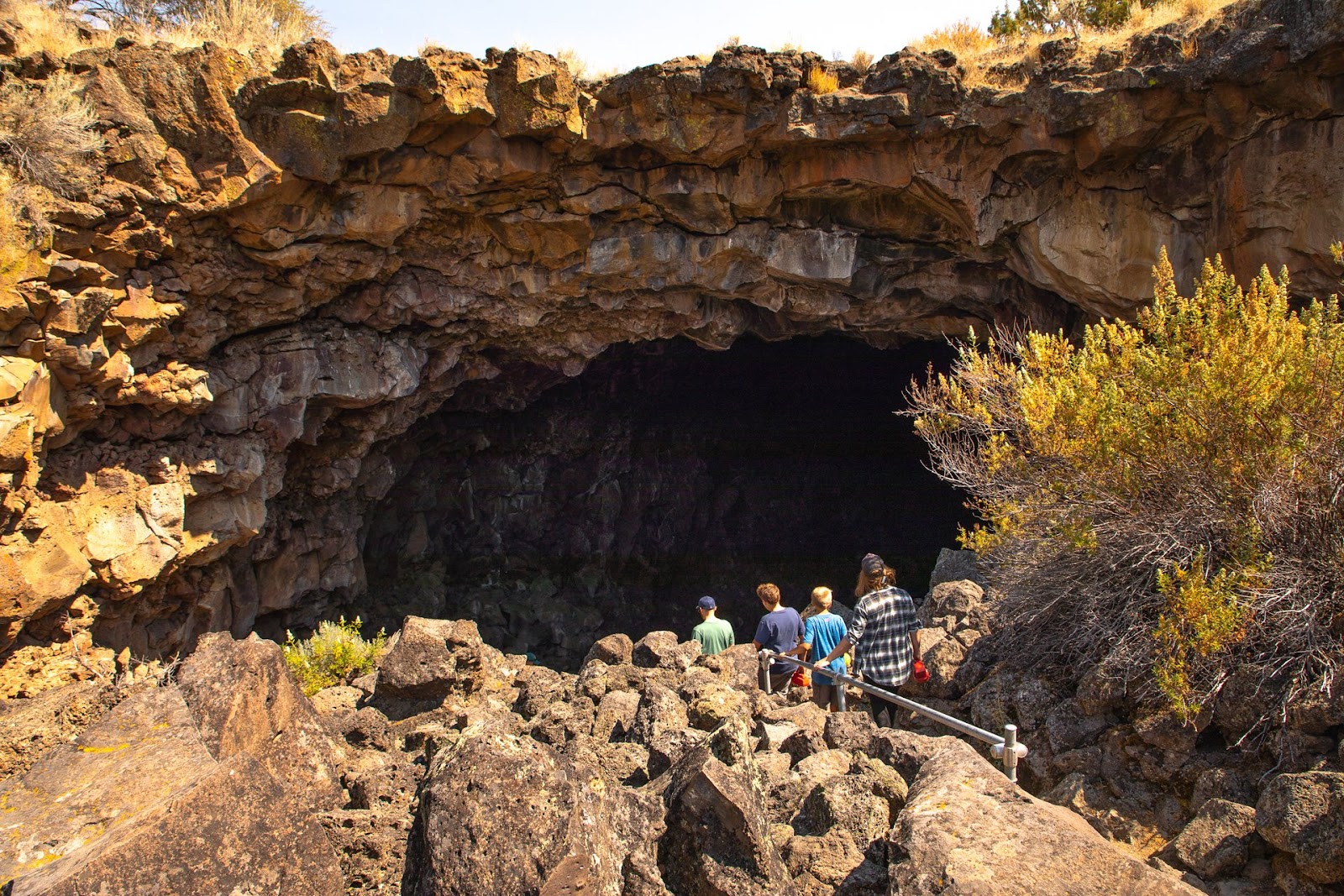 If you’re new to caving, there’s no better cave to visit first in Lava Beds National Monument than Mushpot Cave, just a stone’s throw from the Visitor Center. This 770-foot-long cave is lit by electric lights and threaded through by a paved path. Featuring dripstone, lavacicles, and other intriguing sights, it’s named for a mounded mass of lava capped by a hole—the “mushpot” itself.

Another beginner-friendly cave is the comfortingly spacious, 580-foot-long Skull Cave, named for the skeletal remains of bighorn sheep, pronghorn, and (yes) human beings contained within. An ice floor within suggests this cave provided a water source to people and animals alike.

Other caves suitable for the inexperienced include Heppe Ice Cave, which may contain either ice or a liquid pool of water, as well as the commonly paired Big Painted Cave and Symbol Bridge, which include American Indian pictographs near their entrances. The 2,135-foot Valentine Cave—named for its formal discovery on Valentine’s Day of 1933—is notable for being the only monument cave open to visitors that’s not situated within the Basalt of Mammoth Crater, but rather the Basalt of (wait for it) Valentine Cave; it also shows off some fine lava benches, pillars, and cascades.

Among the moderately challenging, intermediate-level caves in the monument, Golden Dome runs more than 2,200 feet—only a portion of the larger South Labyrinth cave system it belongs to—and is named for the hue of the hydrophobic bacteria filming the ceiling of its rear quarters. That section also contains a potentially disorienting figure-eight passage. Also, word to the wise: Watch out for the aptly named Headache Rock when entering Golden Dome Cave!

Sunshine Cave is another moderately difficult cave thanks to a rough floor in sections and some stooping required, but well worth checking out for its two ceiling collapses, which allow in the namesake sunlight. There’s enough of that sunlight to nourish vegetation inside the cave, also known for its winter icicles and colorful bacterial sheen.

The most challenging visitor-use caves in the monument offer plenty of temptations for the well-prepared and experienced explorer. For example, the 8,436-foot-long Catacombs Cave gets harder the deeper you go, with a cramped ceiling and multiple cave levels, but astounds with its lava pools, cascades, and other beautiful formations, plus the sheer mysterious allure of its great, shrouded extent. 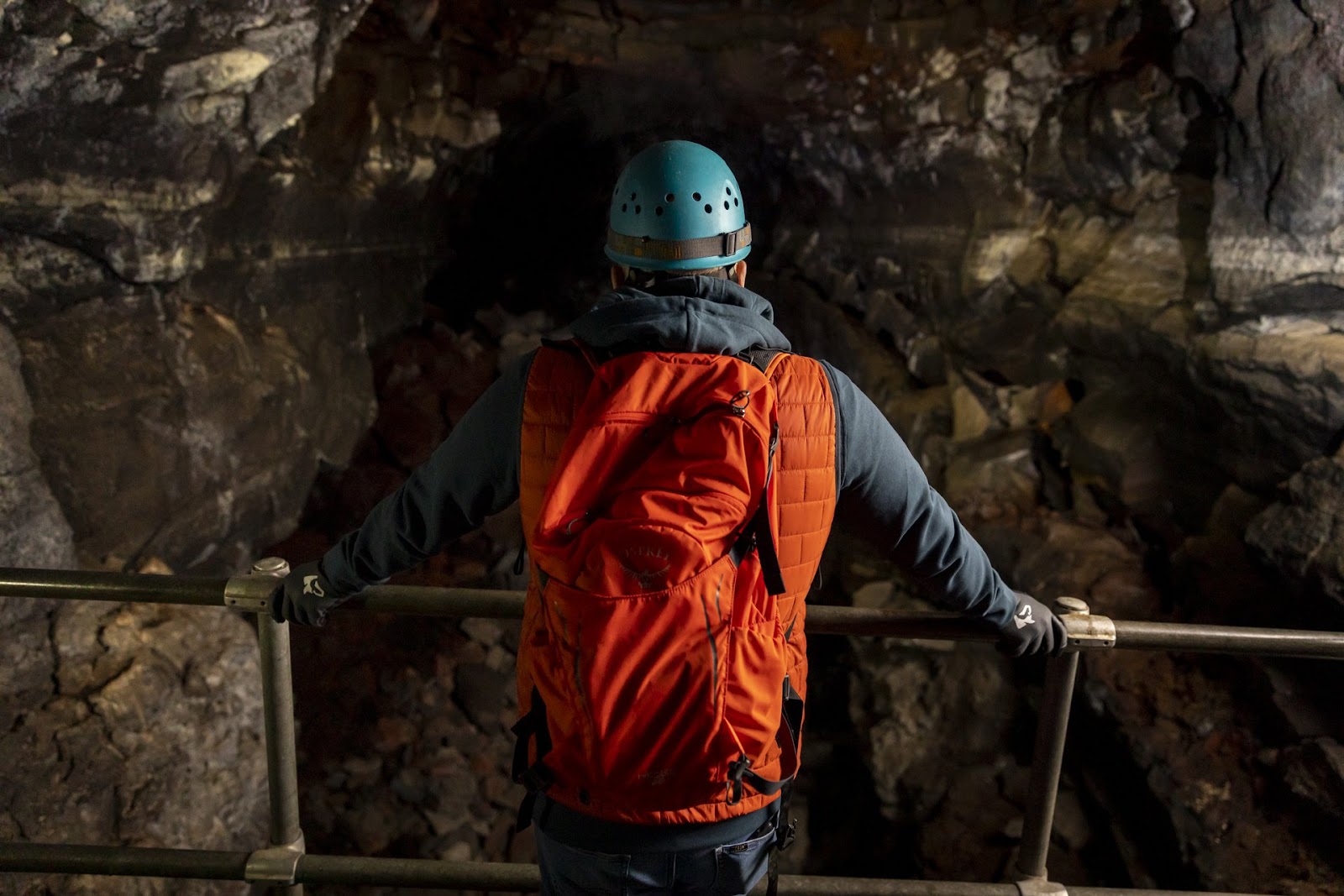 A helmet and a headlamp are always good things to have when caving. Photo by Kamrin Nielsen

Lava Beds National Monument emphasizes the importance of caving safely—preparing for potential hazards you might run into within the caves—and caving softly, which means minimizing your impact on these surprisingly fragile environments.

The monument’s Cave Loop Road provides easy access to many, though not all, of the visitor-use caves. You need a free Caving Permit to enter these lava-tube innards. These permits help keep cave-goers safe and allow managers to fight against the dreaded white-nose syndrome: a fungal disease that threatens the bats who call these cave systems home.

The needs and activity patterns of said bats—16 species of which inhabit the monument, including Townsend’s big-eared bat (the most commonly spotted in the caves), the Brazilian free-tailed bat, the long-eared bat, and the pallid bat—are among the reasons certain visitor-use caves may be temporarily closed at any given time. Check the monument website or contact the Visitor Center for the latest on cave closures.

Don’t touch bats, for goodness’ sake, or any cave features for that matter. If you see bats flying around, let a ranger know, as this may indicate a precious maternal colony. And if you see bats crawling around on the cave floor during the day, or outside a cave entrance, also alert a ranger, as the animal might be evidencing signs of rabies.

Never explore the monument’s caves alone, and always bring a couple of sources of reliable illumination: a headlamp and a flashlight are best (the monument Visitor Center may have flashlights available to loan out). It’s best to wear a helmet—those ceilings can be low—as well as long pants; trickier caves may also warrant knee pads and gloves.

Take advantage of the facilities at the Visitor Center before exploring caves, so you don’t end up treating them as a restroom. Food, alcohol, fires, pets, and cigarettes are prohibited inside caves to protect natural resources. 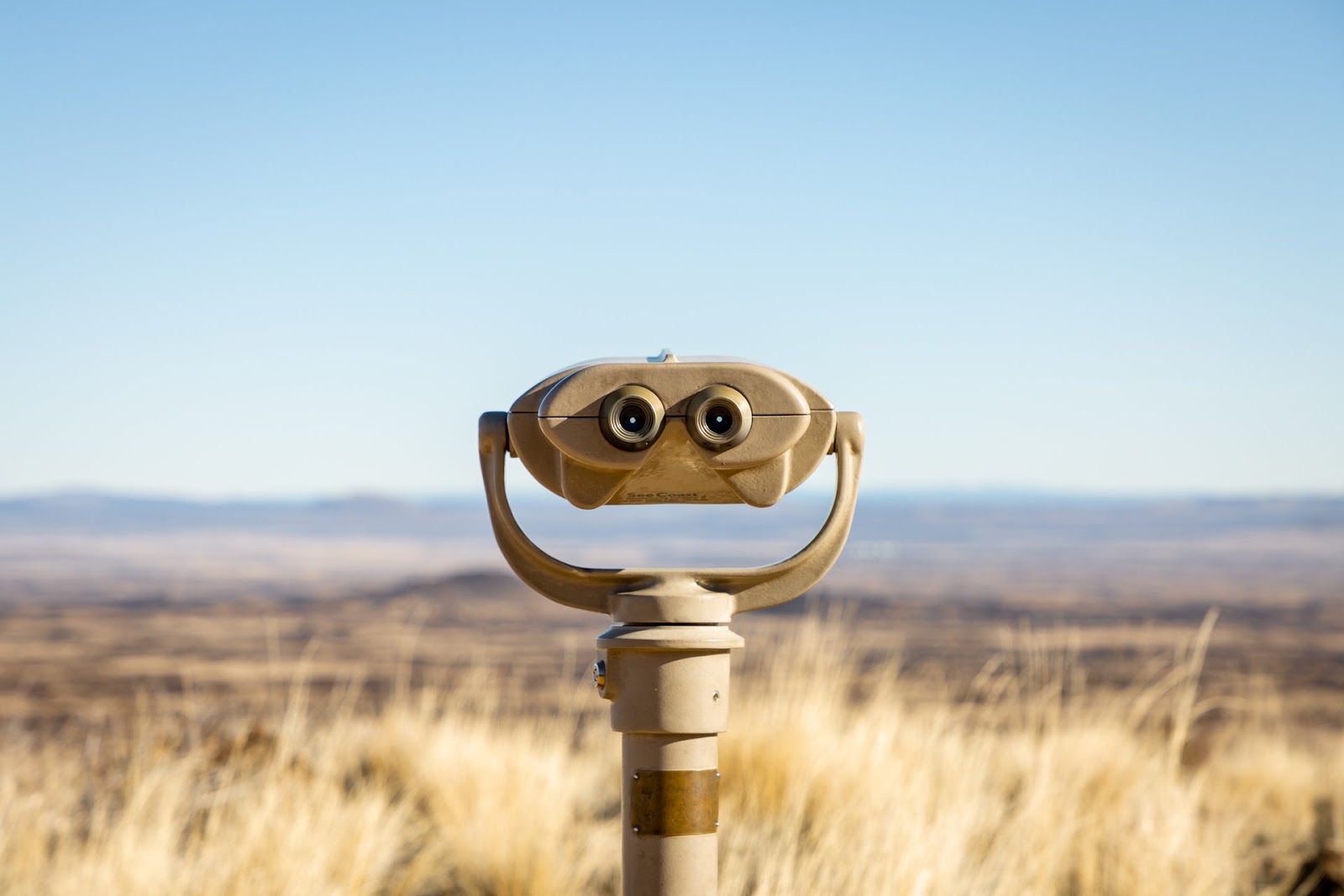 Possessing the proper permit, suitably prepared, and maintaining a Leave-No-Trace, Cave-Softly mentality, you can (responsibly) tap into real geologic magic in the tantalizing underground of Lava Beds National Monument.

A hop, skip, and a jump across the California border from Klamath County, edging the south end of Tule Lake, this volcanic—and cultural—landscape is a real, honest-to-goodness must-see sort of place.