Klamath County is downright spoiled when it comes to blue-ribbon waterbodies. After all, it plays host to a number of glittering lakes and pristine rivers throughout the area, two genuinely superlative lakes: Crater Lake up in the High Cascades and, right at the doorstep of Klamath Falls, the one and only Upper Klamath Lake.

Upper Klamath Lake ranks as the largest lake by surface area in Oregon, and besides its enormous ecological significance, it offers a rich assortment of outdoor recreation and sightseeing opportunities.

Here, we’ll highlight some of those opportunities, but only after priming you with some facts and stats about this extraordinary freshwater expanse!

Upper Klamath Lake: One of the Freshwater Crown Jewels of the West 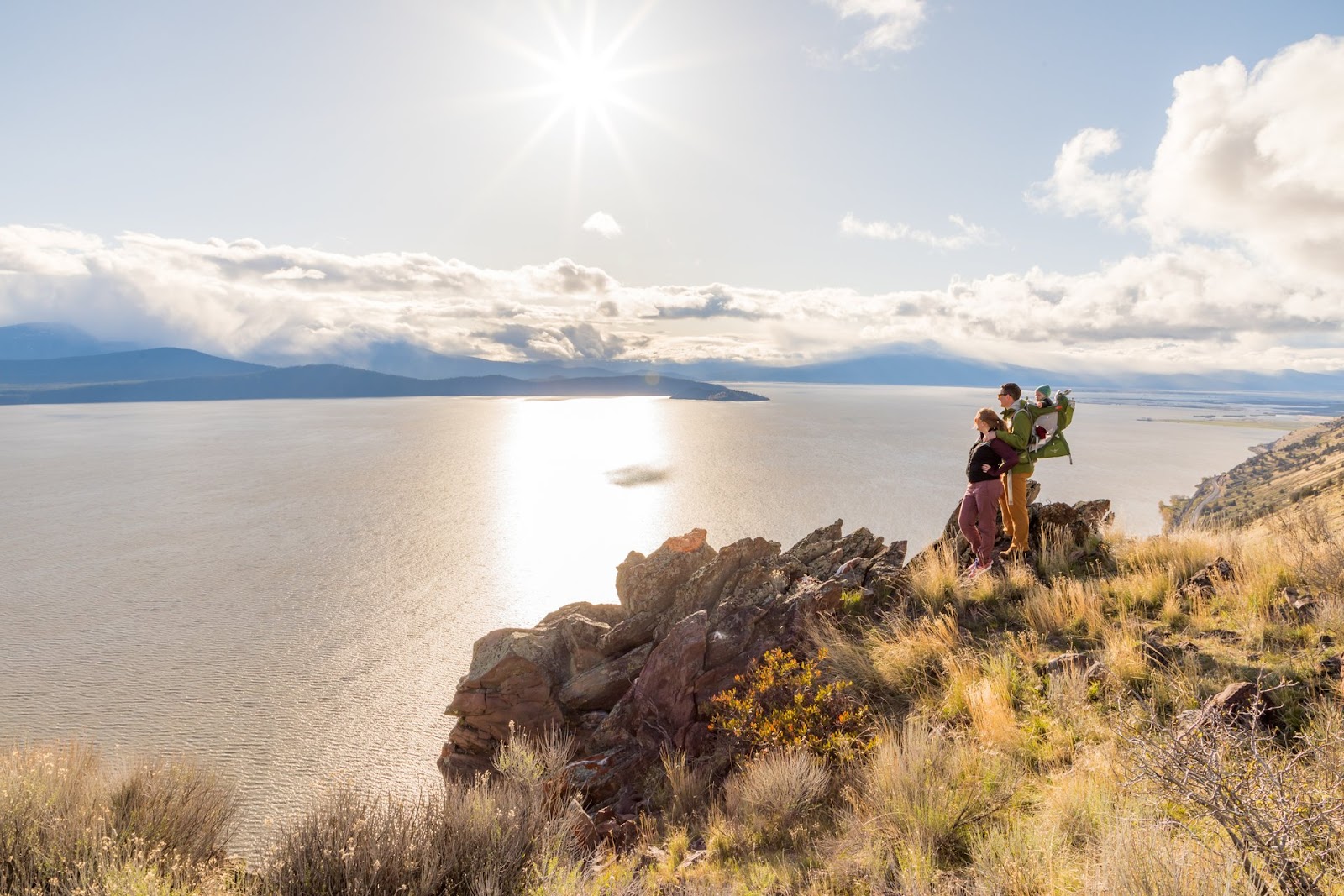 Taking in the sprawling views of Oregon’s largest body of freshwater. Photo by Kamrin Nielsen

Sprawling across some 91,000 acres, Upper Klamath Lake isn’t only Oregon’s largest lake, but also the largest freshwater lake in the Lower 48 west of the Rocky Mountains. It runs some 30 miles long by eight miles wide, reaches up to 60 feet deep, and claims nearly 100 miles of shorefront.

The clear, trout-sloshed waters of the Wood and Williamson rivers feed Upper Klamath Lake, which is drained by the Link and then the Klamath rivers: the latter one of a mere handful of streams that rise east of the Cascades and then cut across that great barrier to reach the Pacific.

Upper Klamath Lake (which includes Agency Lake as its northernmost arm) is big, sure, but it’s a mere remnant of a much larger ancestral waterbody: Lake Modoc, a prehistoric pluvial lake that encompassed, within its 1,000-plus-square-mile extent, not only present-day Upper Klamath Lake but also Tule and Lower Klamath lakes. A drying climate at the close of the Pleistocene caused Lake Modoc to recede, leaving these smaller constituent lakes and numerous wetlands as its heritage.

Upper Klamath Lake’s size alone would be impressive, but it also boasts quite the mountainscape backdrop, with a scenic shoreline and on-the-water views of nearby heights such as Pelican Butte and Mount Harriman as well as the mighty cone of Mount McLoughlin (Southern Oregon’s loftiest peak) and the shattered rim of Mount Mazama, where Crater Lake abides.

Getting Out & About On (and Around) Upper Klamath Lake 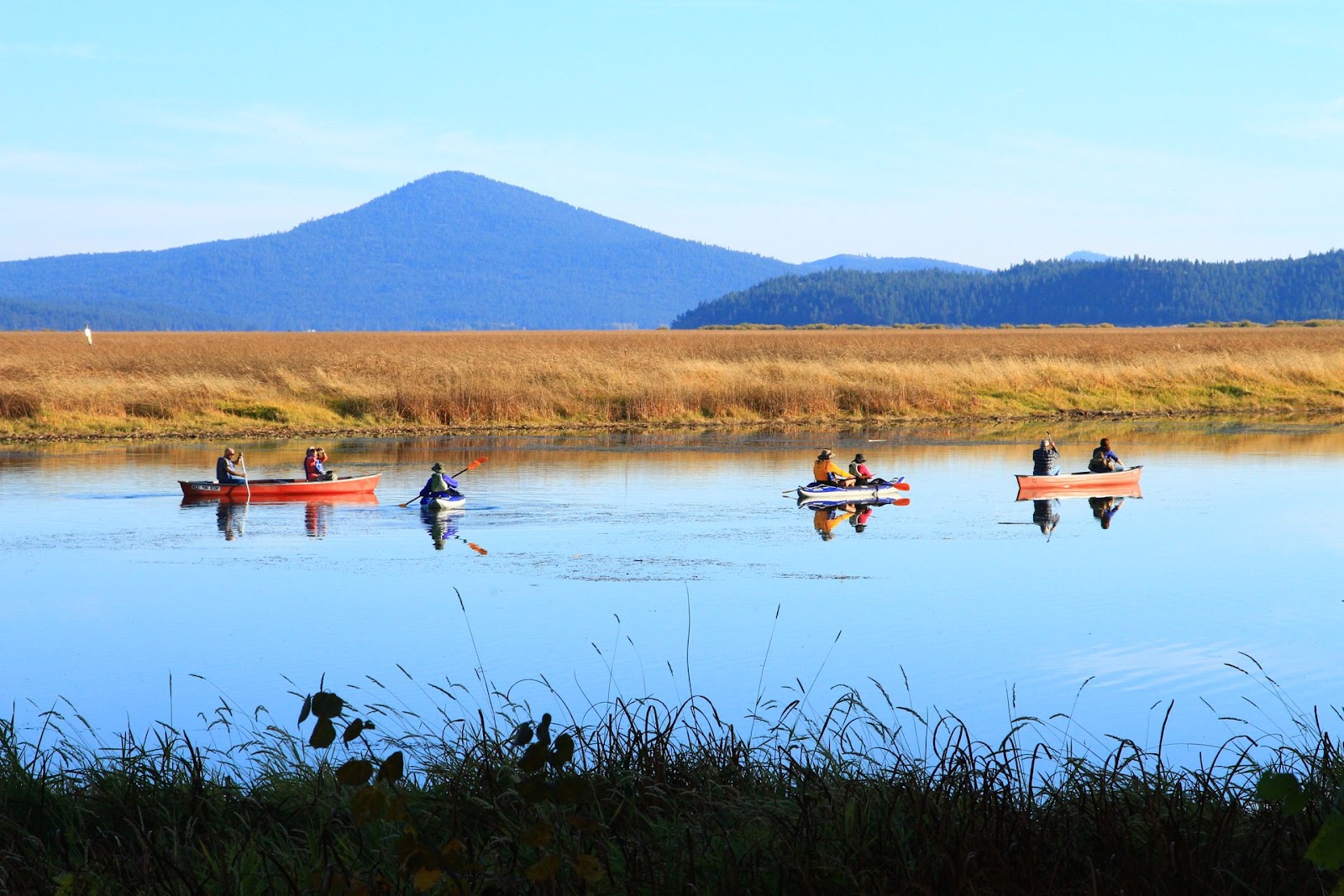 Boats of all shapes and sizes can explore Upper Klamath Lake. Photo by Larry Turner

Klamath Falls makes a ready-set-go springboard for explorations of Upper Klamath Lake, on and off the water.

Tooling around in your own motorboat, taking a guided scenic cruise: Upper Klamath Lake is a fine place for boating indeed. And that includes some of the best conditions for inland sailing in the Northwest, with steady breezes, wide-open thoroughfares, and numerous coves. Indeed, Sailing Magazine has ranked the lake among the 10 best in the country for sailing.

Kayakers and canoeists get to eat their hearts out foraying through Upper Klamath Lake’s bays, feeder creeks, and canals. An especially celebrated route is the designated, 9.5-mile Upper Klamath Canoe Trail on the lake’s northwestern margin, where paddlers launching from Malone Springs or Rocky point can explore Pelican Bay, Recreation Creek, Wocus Cut, and other marshy backwaters. 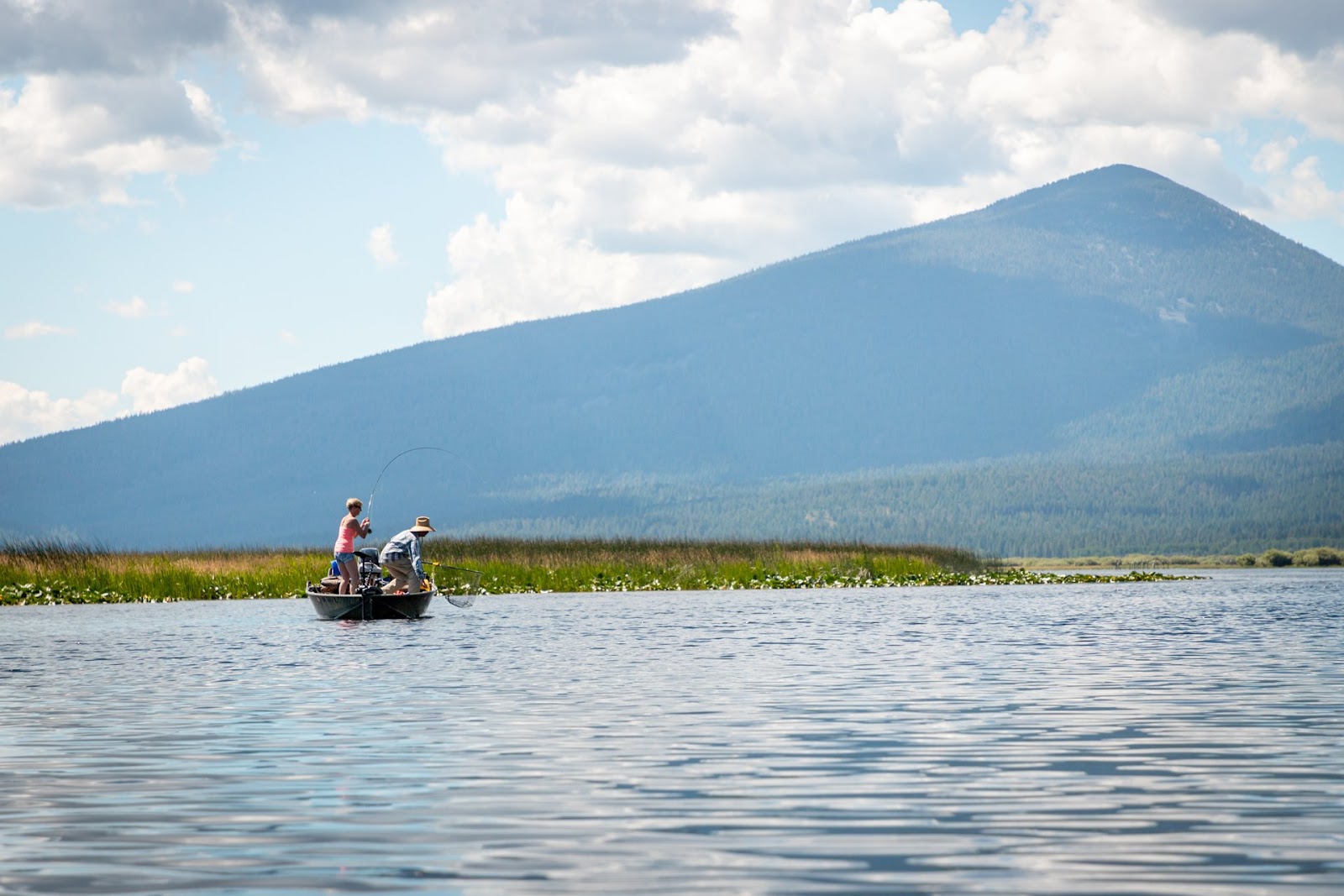 The Upper Klamath Basin is justly renowned for its fishing. After all, the unique form of rainbow trout known as the Great Basin redband—much sought-after by anglers—reaches its greatest size here. A champion redband trout hauled up from the Upper Klamath Lake depths spanned 37 inches from schnozz to tailfin and weighed better than 25 pounds. Cast for redbands here in spring and fall (in other seasons they move into the feeder rivers), or pursue yellow perch, bullheads, and other quarry.

Appreciating Upper Klamath Lake doesn’t require actually getting on the water. Through the good work of the Klamath Trails Alliance and other groups and agencies, there’s a rich trail system within the lake’s viewshed, including extensive routes for hikers, cyclists, and runners at Moore Park and Spence Mountain. Occupying a striking peninsula jutting out into the lake along Shoalwater Bay, Eagle Ridge County Park offers its own trails as well as primitive camping.

Any of the above activities (windsurfing and kiteboarding maybe less so) can double as Upper Klamath Lake wildlife-watching safaris. The stars of the show sport feathers: This is one of the best birding destinations in North America, after all! From the bald eagles of winter and the droves of migrating waterfowl and shorebirds to summertime nesters, birdlife around Upper Klamath Lake is spectacular. White pelicans, black-crowned night herons, the famous “dancing” grebes, warblers and woodpeckers—there’s a lot to see, especially when you come armed with a pair of binoculars and/or a spotting scope.

But the avian contingent isn’t the be-all, end-all of the wildlife roster. Keep your eyes peeled for lithe mink and river otters, shoreline mule deer, handsome gopher snakes, and furtive coyotes in the conifer woods and glades of the lakefront uplands. 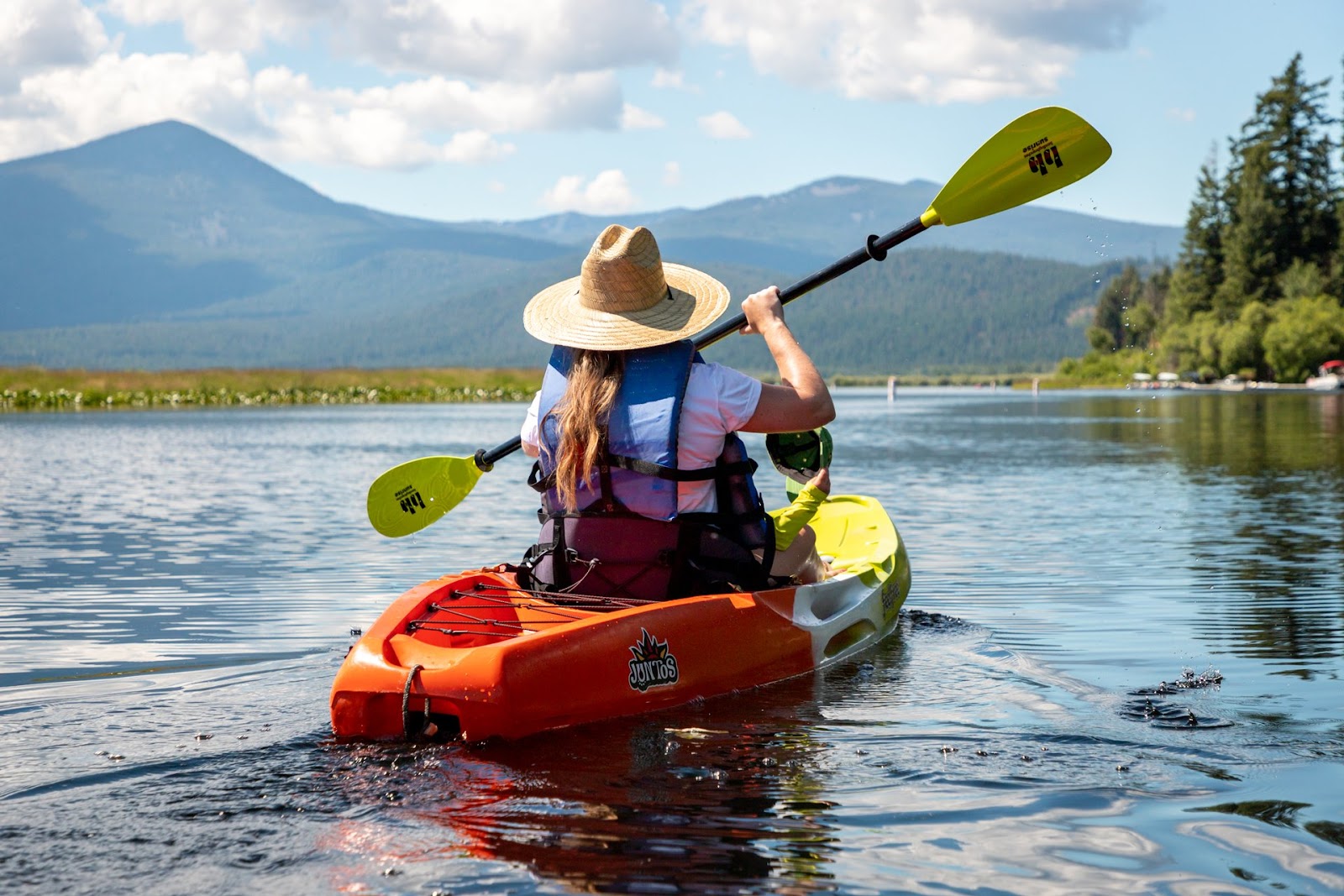 Paddling is one of the best adventures you can have at Upper Klamath Lake. Photo by Kamrin Nielsen

Fly-fishing for honking redbands, expanding your birding life list several times over, riding the wind via sailboat or kiteboard, pedaling to far-reaching views out over the glistening waters: On your next getaway to Klamath County, consider a multi-pronged approach to getting acquainted with Upper Klamath Lake and its deep and varied pleasures!