Descending to depths of nearly 2,000 feet, Crater Lake is the deepest lake in the United States. And as the centerpiece of Oregon’s only national park, Crater Lake’s exceptional clarity makes it a prime tourist destination: The park routinely draws more than a half-million visitors every year.

Naturally, that beauty also attracts cyclists to the 33-mile Rim Drive circling the lake. It’s a grueling road, full of hairpin turns and thigh-burning ascents, but riders love Rim Drive for its solitude, scenic terrain, and stunning viewpoints along the way. So if you’d like to get out of the car and into the saddle, here’s what you need to know about cycling Rim Drive at Crater Lake National Park.

Know Before You Go

You’ll need to prepare for the ride long before inflating your tires. Follow these tips for making the most of your trip:

It’s for experienced riders only. There are no shoulders along Rim Drive, and you’ll feel it whenever a vehicle passes you—especially on several of the route’s hairpin turns. As if that weren’t enough, the grueling workout demands several thousand feet of elevation gain, and you won’t find potable water along the route (other than at Rim Village). Then, there’s the altitude: You’ll be navigating the route at 7,000 feet.

Know when to go. Rather, know when not to go. Since you’ll share the road, try to avoid holidays, weekends, and the middle of the day. If possible, plan for shoulder season—generally, mid-June to Independence Day and Labor Day to early October—when the whole route is open, but crowds aren’t quite so heavy.

Keep an eye on cell reception. Cell phones can go from “no service” to full coverage in the span of a few feet, so take that into consideration ahead of time if you’ll need your phone for navigation.

Plan your route. For the most part, there’s no wrong way to ride the rim at Crater Lake. But by riding counterclockwise, you’ll save some of the park’s most scenic viewpoints for the end, when you’ll most appreciate a breather. In addition, if you’re going clockwise, you’ll end your ride with more of a climb. 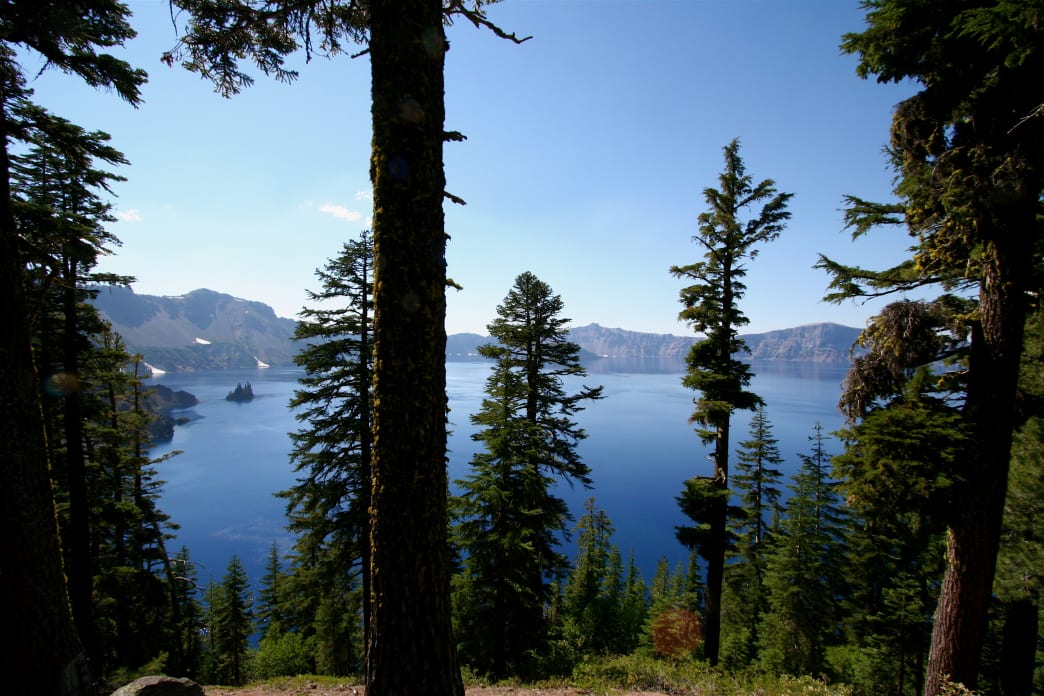 Crater Lake National Park is covered by a massive amount of snow each winter, so the window for cycling is relatively narrow. Roy Luck

Crater Lake National Park spends much of the year buried under several feet of snow—the average annual snowfall at park headquarters is 43 feet—so it’s difficult to predict when the entire Rim Drive route will open for the season. (Keep an eye on the official park website in May, June, and July for opening dates.) That said, here’s what to know for the most popular seasons. Spring : West Rim Drive generally opens between late May and mid-June, and East Rim Drive opens a few weeks later. Seasonal opening dates depend on the previous winter’s snowfall totals and springtime snowmelt.

Summer : All roads in the park generally open by mid-July, but summer brings the biggest crowds to Crater Lake. Brace for the most congested roadways at midday, especially on weekends.

Fall : Freezing temperatures return in late September and early October (along with the season’s first snow flurries), and most in-park businesses close by Halloween. Rim Drive generally closes for the season by mid-October or early November. 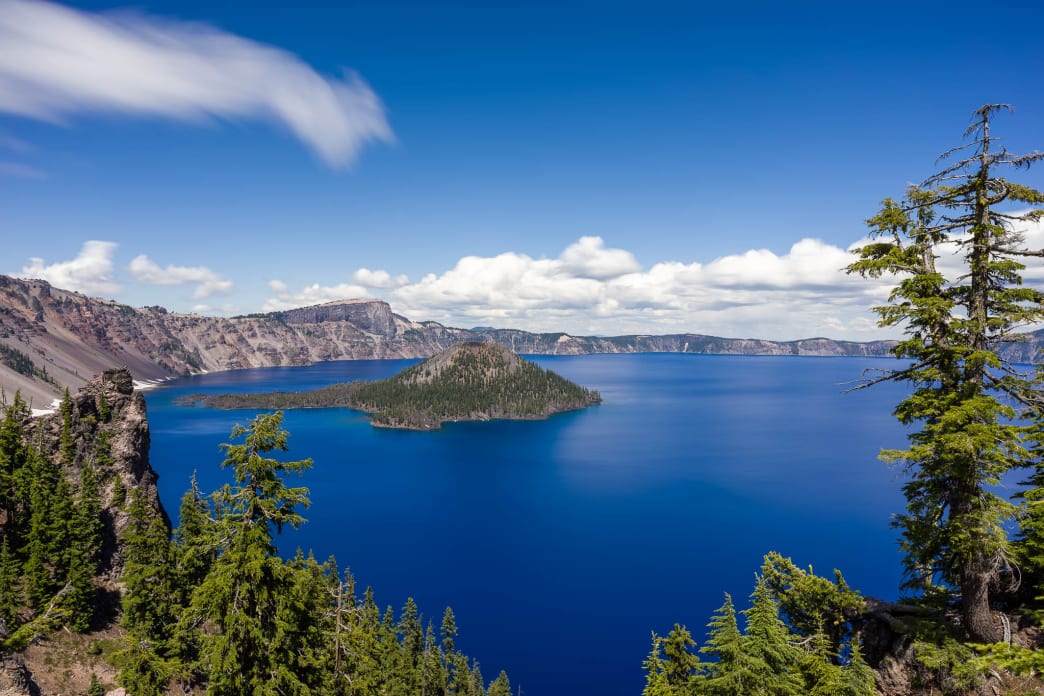 Take advantage of the views from car-free roads during the annual Ride the Rim in September. David Wood

Ride the Rim : Held on two Saturdays every September, Ride the Rim gives cyclists the opportunity to ride the 25-mile East Rim Drive while it’s completely closed to traffic (you can complete the full loop on the West Rim Drive, but that section is open to vehicles). The ride includes shuttles, bike corrals, and water refill stations along the way. Snacks are generally donated but aren’t guaranteed, so riders should bring plenty to sustain themselves. Note that the shuttle is only between North Junction (where Rim Drive meets the northern entry road) and park headquarters along the West Rim, and no SAG wagon is available.

Crater Lake Century Ride: Hardcore cyclists can sign up for one of the state’s most scenic century rides, which takes place every August. The Crater Lake Century Ride starts at the Fort Klamath Museum, roughly 18 miles south of the park’s southern entrance, and the course features a loop around Crater Lake. Be prepared to earn your views and descents: The route delivers a whopping 6,000 feet of climbing.

What to See Along the Way

Natural beauty extends in every direction along Rim Drive. Here are some of the highlights cyclists can expect along the 33-mile route.

Cleetwood Cove : The hiking trail descending to Cleetwood Cove offers the only safe and legal access to the Crater Lake shore. If you haven’t burned enough calories on the ride (ha!), the path drops 700 feet over 1.1 miles. Just remember to save some energy for the return route back to the rim.

Phantom Ship Overlook : There are few better places along the rim to enjoy views of the Phantom Ship, a rock formation that rises 170 feet above the lake.

Cloudcap Overlook : The highest point in the park accessible to vehicles and bicycles delivers some of the park’s best views from high above the lake’s eastern shore.

Riding the Rim Drive around Crater Lake isn’t easy. But for experienced cyclists, it’s one of those bucket-list adventures that’s well worth the effort. It’s one of the most beautiful parts of the country and seeing it by bike is an experience that’s hard to pass up—just be sure to keep up with the training before you make the trek.

Written by Matt Wastrodowski for Matcha in partnership with Discover Klamath Visitor and Convention Bureua.