Done in a Day: The Top 7 Ways to Spend a Day on a Trip to Klamath Falls

A visit to Crater Lake National Park is just one of the spectacular day trips you can take from Klamath Falls. Michael Whyte

Located in the heart of some of Oregon’s most beautiful country, Klamath Falls is the perfect base camp for exploring the region. Founded in 1867, the town is known for its sunny weather—300 days of it every year—as well as world-class outdoor experiences, and chill mountain-town vibe. It sits on the edge of Upper Klamath Lake about 25 miles north of the California/Oregon border, and you’d be hard pressed to find a place to enjoy more outdoor adventures on any given day: mountain bike trails, whitewater rafting, hiking, paddling, fishing, zip-lining, and camping, just to name a few.

Whether you want to explore the nearby national parks or escape to a favorite fishing hole, you can find the experience near Klamath Falls. Here are seven of the top day trips in the region to get your inspiration sparked.

Eight miles wide and running for 25 miles north to south, Upper Klamath Lake is overflowing with incredible adventures. One of the best routes to paddle is found during the spring and fall months along the Upper Klamath Canoe Trail. Roughly 20 miles from town, the paddling route follows two main creeks and a shallow channel for 9.5 miles, meandering through the Upper Klamath National Wildlife Refuge, which is only accessible by boat. There you’ll explore the marshes, watch wildlife, and soak up magnificent mountain vistas. Numerous other paddling routes exist on the lake, including tours from ROE! Real. Oregon. Experience!, who are highly recommended local guides to all things water in the region.

Located 45 minutes north of Klamath Falls, Crater Lake National Park is a hiking, biking, and stargazing wonderland for the entire family. Hike up the short and steep Garfield Peak near the lodge to enjoy incredible views of the entire region, from Wizard Island all the way to the pointy peak of Mount Thielsen. In the summer, a boat tour on the volcanic lake (accessible by hiking down the Cleetwood Cove Trail) is a refreshing way to beat the heat. Make sure to drive around the rim of the ancient volcano, as it features superb panoramic views. Stick around well after sunset to see one of the best night sky displays in the country. Even better, take a guided sunset hike up to Watchmen Peak. Just remember to bring a flashlight or headlamp for the trip back down.

Prefer to let someone else do the driving? Hop aboard the seasonally operated Crater Lake Trolley, which leaves from the Rim Village and offers a guided tour of the park. You can also catch a separate shuttle that leaves from Klamath Falls and will take you to the national park. 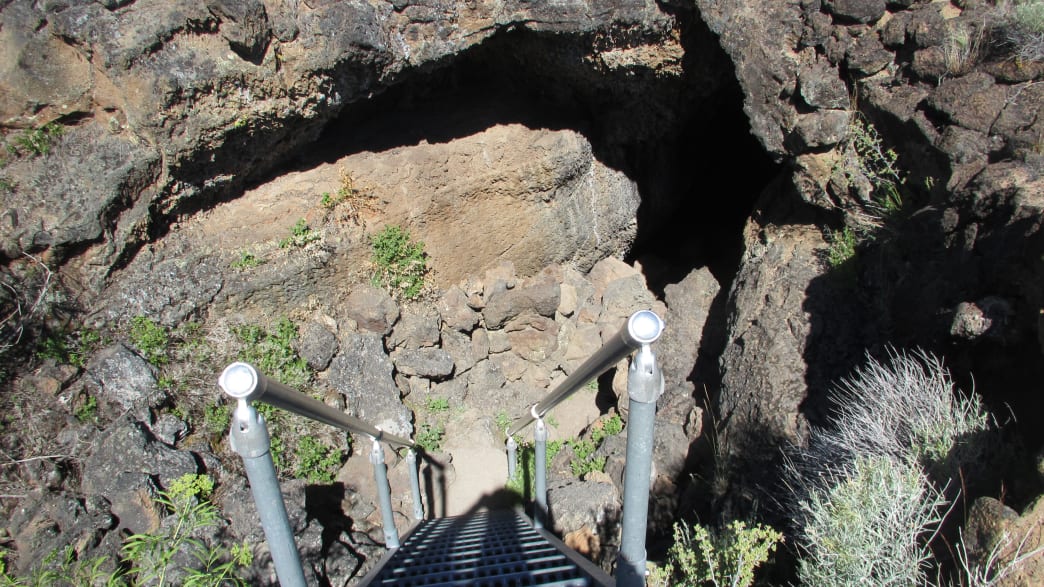 Descend into the caves and lava tubes in the Lava Beds National Monument. Jeff Moser

Forty-five minutes south of Klamath Falls in California, Lava Beds National Monument is one of the more unique landscapes in the country. Volcanic activity between 60,000 and 10,000 years ago formed the unusual geological formations known as lava tubes. As the outer part of flowing lava cools, it morphs into cylindrical shapes. Once the molten lava hardens, these tubes keep their shape—and make for magnificent exploring.

You’ll find more than 700 caves in the park, and highlights of the lava-filled terrain include a handful of underground trails found along Cave Loop Road, as well as the Mushpot Cave, which is the only lighted cave in the monument. It’s recommended to come prepared with a headlamp, extra batteries, and warm clothes, even in the summer. While it might be toasty outside, some of the lava tubes have ice in them year round.

A few miles north of Lava Beds, Tule Lake National Wildlife Refuge is a favorite place for birders and photographers on the lookout for wildlife. Take the Tule Lake Auto Route to find stunning views of Mt. Shasta, while keeping an eye out for snow geese, owls, eagles, and hawks. In the fall, winter, and spring months, the marshes are incredibly active with migrating birds. Some visitors have witnessed thousands of snow geese in the area, turning the landscape white as they rest in the fields.

Those looking for more ambitious adventures should head to the Sky Lakes Wilderness. Located 66 miles northwest of Klamath Falls, this wilderness area is prime for summer and fall hiking. Its 113,000 acres features rugged peaks, dense forest, ice-cold springs, and clear subalpine lakes with some of the purest water in the world. While much of the hiking in Sky Lakes can be challenging, the 14.6-mile Sky Lakes Loop is relatively accessible. The trail is moderately graded, and while there is 1,600 feet of elevation gain, it’s a good option for fit hikers—and the views are indeed worth the effort. 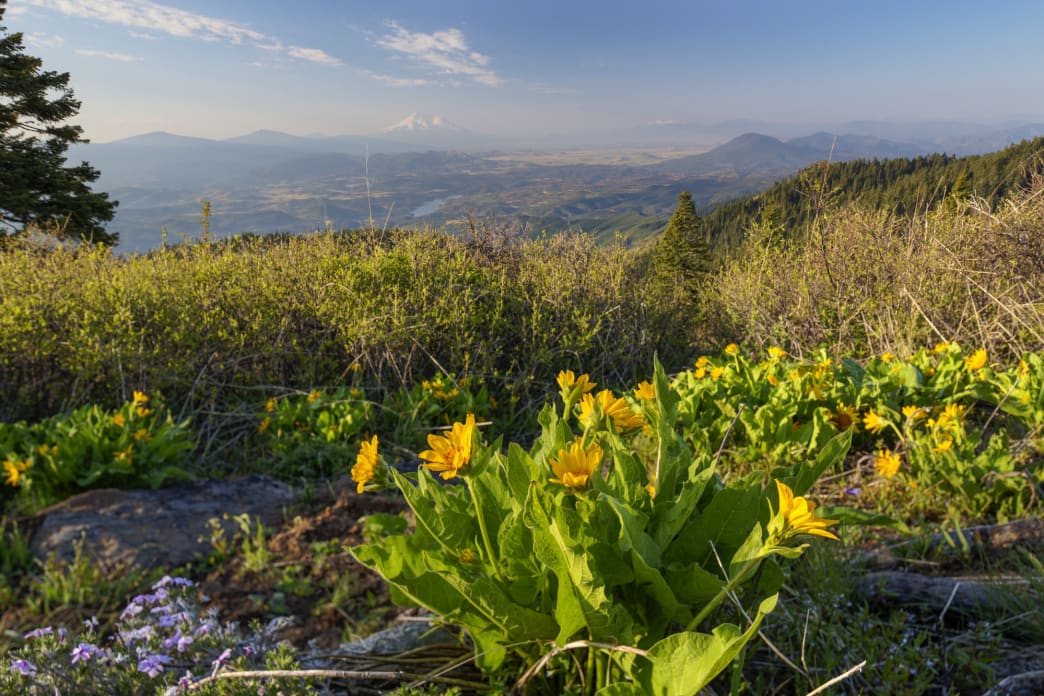 A scenic drive 52 miles west of Klamath Falls will put you at the Cascade Siskiyou National Monument. Best seen during the summer and fall months, Cascade Siskiyou sits at the convergence of the Cascade, Klamath, and Siskiyou mountain ranges. It’s both geographically and biologically unique, with an elevation range of 2,100 to 6,100 feet. Hobart Bluff is a favorite hike, and after a 1.5-mile (one-way) trek, you’ll enjoy views all the way to Mt. Shasta 75 miles away. Pilot Rock is another short hike, but its steepness can be challenging for hikers not used to climbing. Those searching for true solitude should explore the Soda Mountain Wilderness.

Thanks to those 300 days of sun, outdoor devotees can choose from seemingly endless opportunities on the region’s rivers and lakes. For incredible fishing, boating, and paddling excursions, Lake of the Woods is a great spot to explore, and it’s said to have some of the best fishing around. Adrenaline junkies craving whitewater need look no further than the Klamath River, a top spot in the West for whitewater rafting.

For a more relaxing day on the water, head to Wood River for crystal clear waters and stunning natural scenery. The rivers and lakes around Klamath Falls are also incredible for fishing enthusiasts; if you’re new to the area, hiring a guide is a great way to find what’s biting when you visit. Whatever water-based adventure you choose around Klamath Falls, though, you won’t be disappointed.