Oregon’s Klamath County boasts extraordinary ecological diversity: It straddles the Southern Cascades and a basin beyond the mountain range’s eastern face, making way for expansive farmland, old-growth forests of hemlock and Douglas fir, and Mars-like lava flows on the slopes of Brown Mountain. And while you can enjoy most of that natural beauty from behind a windshield, there’s no better way to experience that rich variety than from the seat of a mountain bike along one of the region’s many accessible trails.

So whether you’re looking for the area’s classic stand-bys or want to get off the beaten path on a lesser-known trail, here are some of the best mountain biking paths in the Klamath Basin, Sky Lakes Wilderness, and Southern Oregon.

Why you should try it : No article on the region’s best mountain bike trails would be complete without a nod to Spence Mountain, the most popular mountain bike trail system in the Klamath Basin. Numerous trails crisscross Spence Mountain—the area hosts roughly 28 miles of trails, in all–but the South Ridge and Hooligan trails offer a fun introduction. The singletrack paths unveil views of Upper Klamath Lake, Mount Shasta, and more. The paths also host quick descents, berms, and rock gardens for an added challenge. 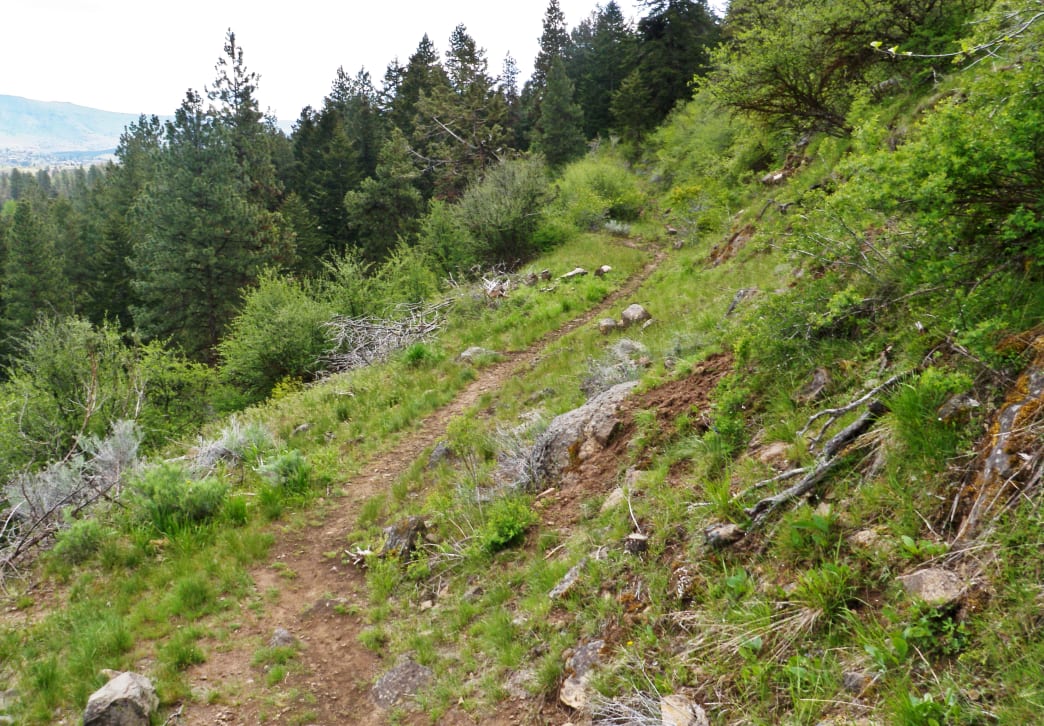 The trails on Moore Mountain are just inside Klamath Falls city limits, and they’re an excellent option for novice riders and families. Michael (a.k.a. moik) McCullough

Why you should try it : Enjoy rolling hills, with no shortage of natural beauty, on the Klamath Ridgeview Trail.

The path on the Moore Mountain trail system winds through a ponderosa pine forest and hosts a few rock features to work through. Along the way, you’ll enjoy views of Upper Klamath Lake, a large freshwater lake nestled between the Cascades and the city of Klamath Falls. The singletrack ascents are generally gradual and short-lived, making this an ideal route for novice riders and families. No matter the time of year, you’ll find plenty to love about the Ridgeview Trail. Each spring, you’re likely to glimpse migrating birds along the Pacific Flyway, one of the major migratory bird routes in North America, and nearby aspen groves turn vibrant shades of yellow, orange, and red as fall settles in every September and October. 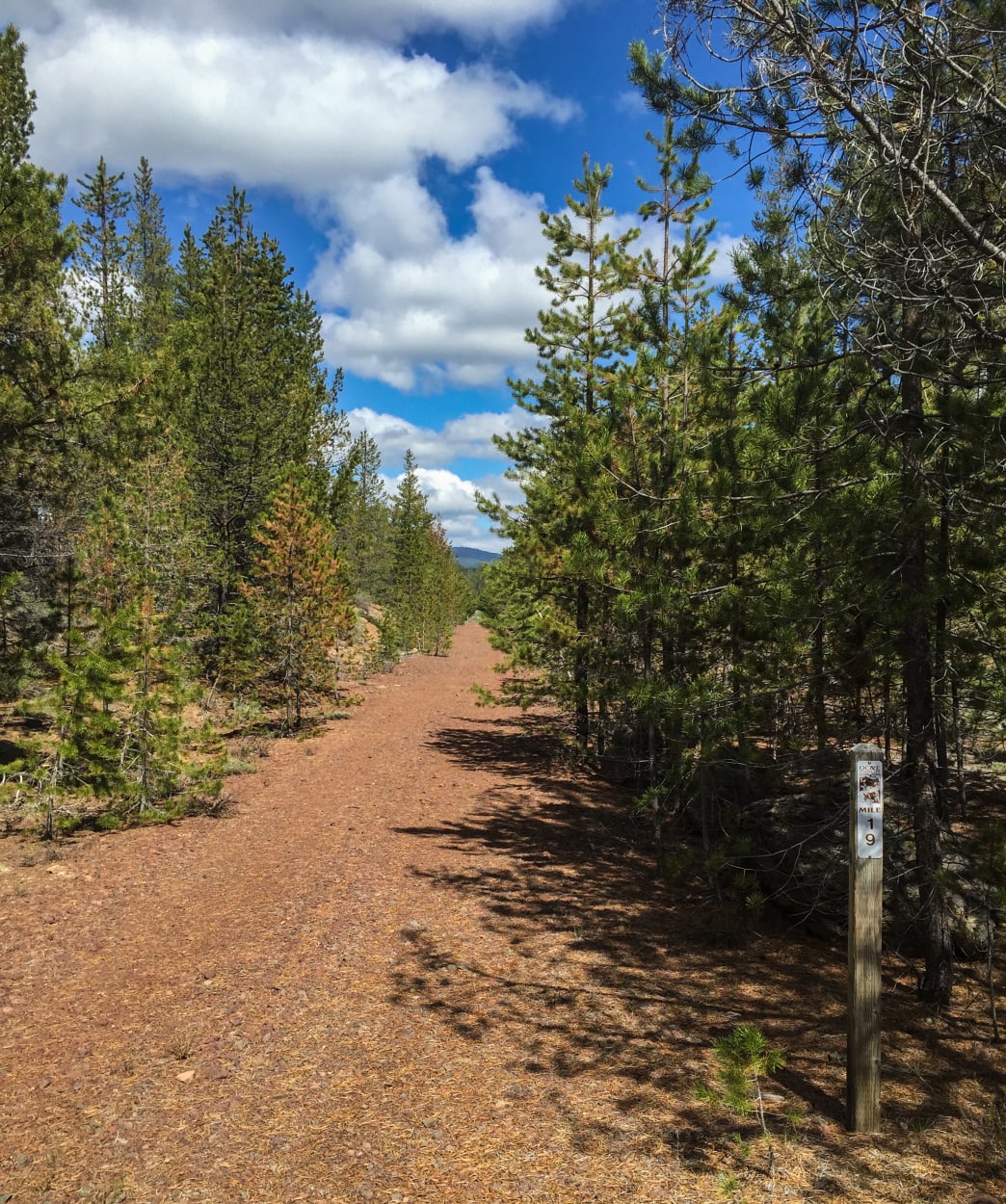 Why you should try it : This trail built on a former railroad line starts in Klamath Falls and is a great way to explore the area.

This gem of a trail is Oregon’s longest linear park, stretching from Klamath Falls to the town of Bly, with a spur trail to Sycan Marsh. From Klamath Falls to Olene, the trail is paved, and you’ll be sharing it with lots of other runners and cyclists. Past Olene, the trail becomes gravel, and you’ll travel north through juniper and sagebrush. The trail descends into the Sprague River Valley and some very scenic timber and ranch lands. Be on the lookout for wildlife here, as the trail becomes rougher, consisting mostly of loose rock and grass. Just north of the town of Beatty, take a wooded spur trail that will take you to Sycan Marsh. It’s on this route that you’ll cross the Merritt Creek Trestle (at mile 27), which is 400 feet long and 50 feet high.

Why you should try it : Whatever kind of natural beauty you’re looking for in Southern Oregon, you’ll likely find it along the Brown Mountain Loop.

Part of the Brown Mountain trail system, this 14-mile path can be combined with the High Lakes Trail for a full loop. Along the way, it passes through huckleberry bushes, old-growth forest, rock gardens, and several small creek crossings. The real highlights, however, are the lava flows on the western edge of Brown Mountain: The terrain through this stretch looks less like the Southern Cascades than a Martian landscape. Novice riders will enjoy the gradual ascent (complemented by an even longer and more gradual descent), and more experienced riders can combine the trail with the Lake of the Woods and Fish Lake trails for longer loops.

Why you should try it : Close to Lake of the Woods, it’s a good trail system for spotting wildlife.

Not far from Lake of the Woods in the Southern Cascades, the Rye Spur Trail passes through a verdant conifer forest, with several opportunities to spy deer, birds, and other wildlife—assuming, of course, you see anything on the trail’s fast-paced descents. The rail basically connects Lake of the Woods to Fourmile Lake, and in between, you’ll find incredible singletrack with sweeping views of Upper Klamath Lake and the wider Klamath Basin.