It’s no secret, Oregon knows great beer. It’s as easy to find as rivers to explore and mountains to climb, and Klamath is no exception. Klamath Falls has a flourishing craft beer scene that’s growing rapidly in recent years, taking pride in the local community and the brewing process. Klamath Falls brew pubs are the perfect place to enjoy a beverage at the end of a day of fun. After all, there is nothing quite like sitting down with a drink in hand, laughing and relaxing with friends and family after a hike, mountain bike ride, or paddling trip. Next time you are in the Klamath Basin looking for a cold craft beer on tap, check out these top breweries and brew pubs in Klamath Falls, Oregon. 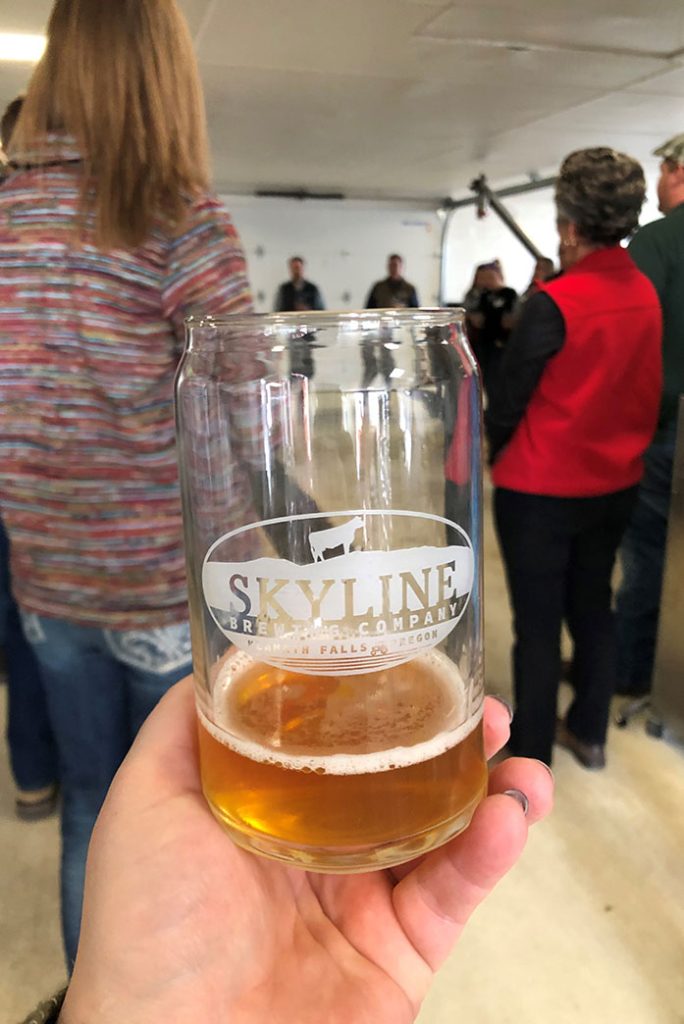 The refreshing tastes of Skyline Brewing.

Without a doubt, some of the top brews to check out in Klamath Falls come from Skyline Brewing Company. This Klamath Falls brewery is built on passion for the local community, their way of life, and most importantly, making excellent beer. Skyline Brewing Company sits in a century-old, long-abandoned dairy on the family farm, and reclaims what is produced on their farm to create their brews. The brewery actually functions on a piece of farm equipment, talk about staying true to the family’s roots! Skyline doesn’t host an on-site taproom, but its refreshing beers can be found at most bars and eateries in Klamath County. 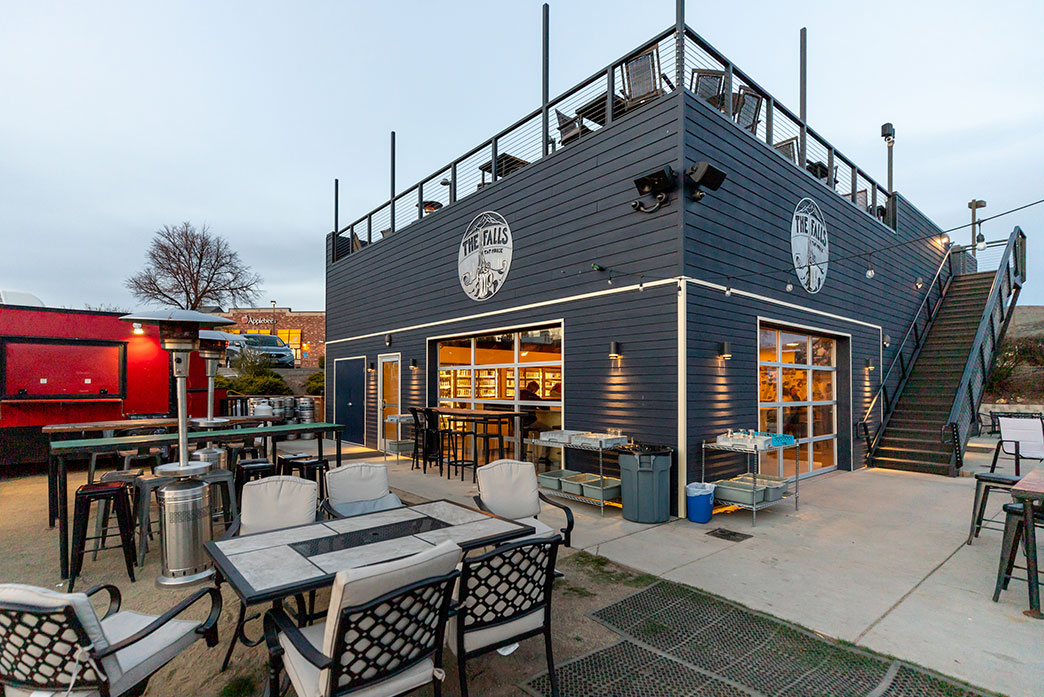 The indoor/outdoor atmosphere at The Falls Taphouse is the perfect place for a brew.

The Falls Taphouse may not be a brewery per se but with an amazing beer selection, it’s definitely a great place to have fun and kick back. The Falls Tap House Klamath Falls is an indoor/outdoor taphouse and food cart lot that serves as a fun, family-friendly gathering spot. With an open air concept, including rooftop seating and views of gorgeous Upper Klamath Lake, the Falls Taphouse Klamath Falls is the perfect place to grab a cold one with friends. 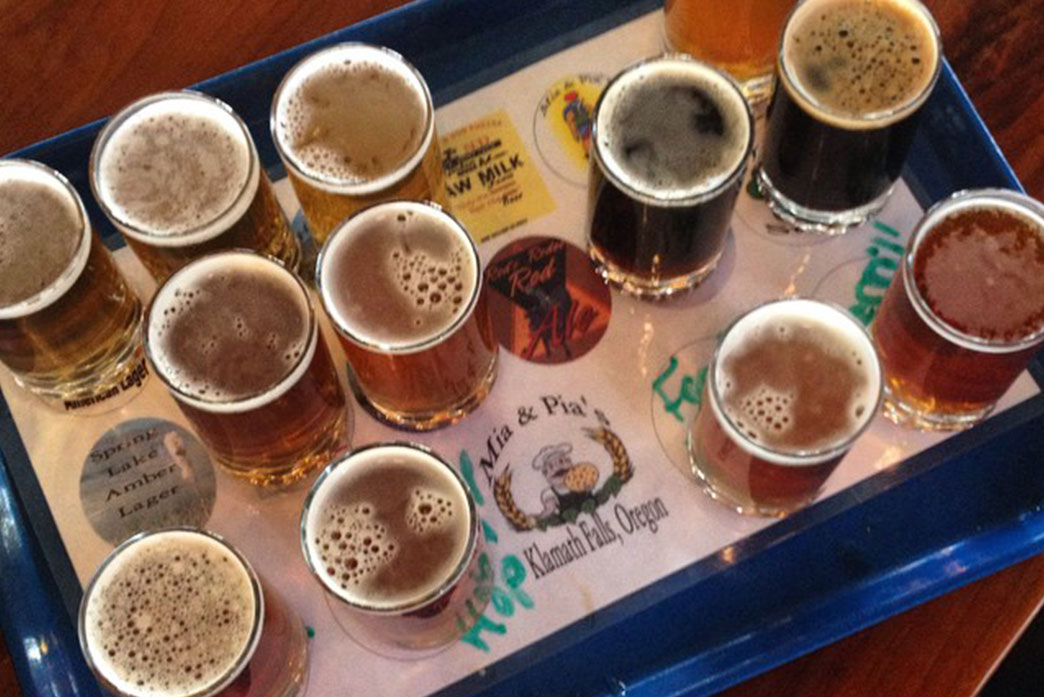 The best flight in town at Mia & Pia’s.

If you are looking for good breweries in Klamath Falls in a casual brew pub setting, don’t miss Mia and Pia’s Pizzeria and Brewhouse. Klamath began its venture into the brewing scene over 25 years ago when Mia and Pia’s Klamath Falls Oregon retrofitted a former dairy into the basin’s first ever micro-brewery. While Mia and Pia’s brewery Klamath Falls is popular for its craft beer game with more than a dozen house-brewed beers on tap at any given time, highlights include an old-school, hop-forward IPA; a crisp Irish-style red ale; a seasonal märzen, and a crisp American lager. Make sure not to miss the savory pizza and sandwiches offered at the brewpub!

Mia and Pia’s continue to grow steadily, and plans are to expand even further with the introduction of new brews and products, and will soon be providing fresh and unique micro-brews to retail outlets and other restaurants and taverns throughout the region.

Locally owned Brevada Brewhouse is a jack of all trades you won’t want to miss in Klamath Falls. While the company does not brew its own beer, it does have Skyline Brewing on tap and a cooler full of micro brews for every kind of beer and cider drinker. This place has it all with sandwiches, salads, coffee, tea, and much more. The atmosphere and space is what really makes this shop something special. Opened by two Oregon Tech graduates, David and Seth’s vision for Brevada Brewhouse Klamath Falls was to be a place where people could comfortably and easily gather to share stories, study or work, or simply just hang out. What originally started as just a coffee house now has extended “after hours” for beer, wine, cider, kombucha, and mimosas.

A post shared by The Growler Guys Klamath Falls (@tggklamathfalls)