The story of Klamath Falls is one of boom and bust, redemption and gumption, trailblazers and settlers, spirited human progress and sprawling natural beauty. In other words, the story of Klamath County is fascinating. Full of ebbs and flows and the dramatic contrasts that make any story worth telling and any place worth visiting or living in. Klamath County today is a place where culture and history are alive on nearly every corner, and in no place is that more evident than in downtown Klamath Falls itself, the bona fide historical epicenter.

Here, you’ll find more than just museums and historical buildings (though of course you’ll find plenty of both!). You’ll also find a way of life that’s infused with a rich, vibrant, interconnected tapestry of all that came before. So, without further ado, here’s a snapshot of Klamath Falls’ rich history and how to best experience it today.

A Brief History of Klamath Falls 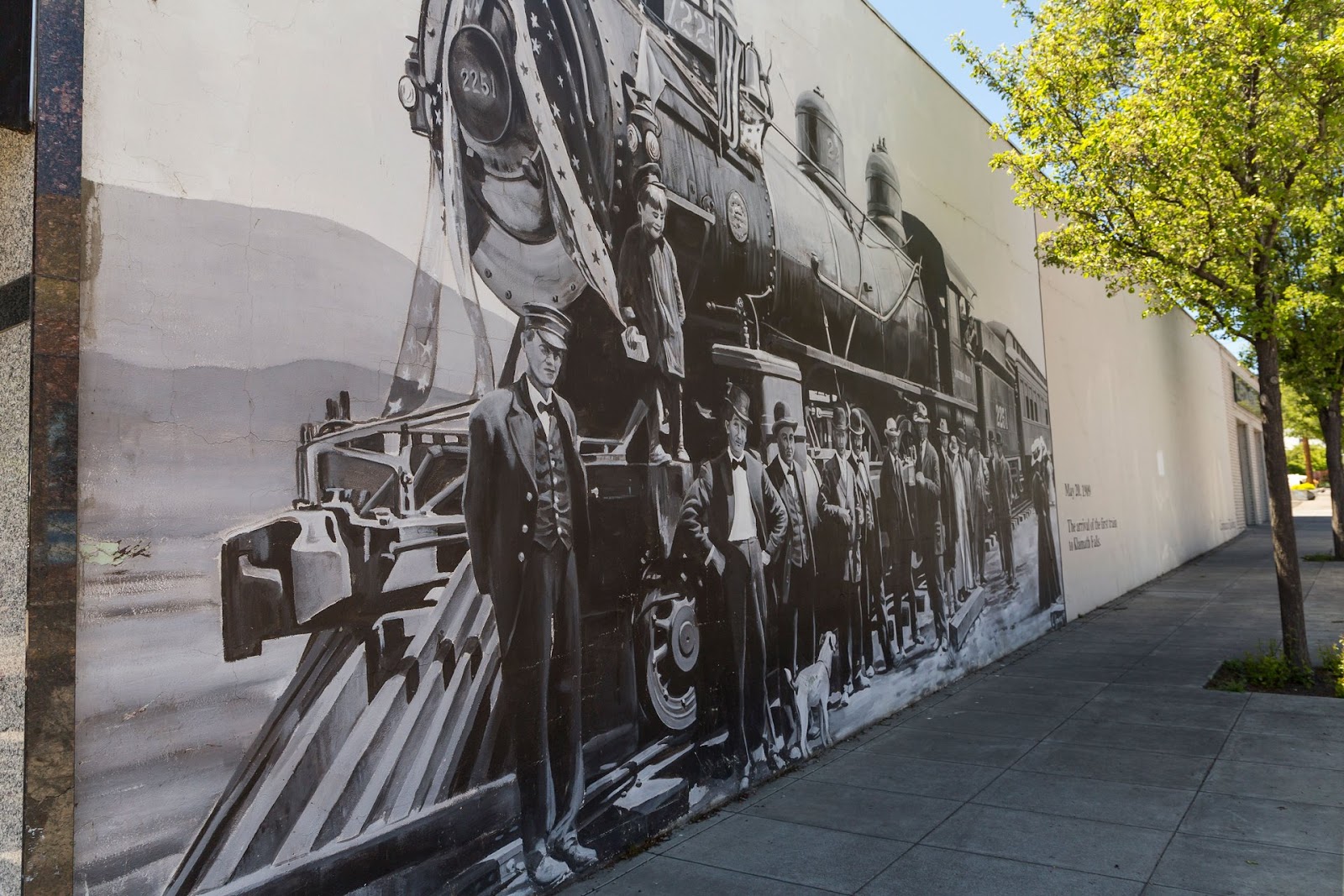 It may come as a surprise to some, but in the early 20th Century—thanks to the arrival of the Southern Pacific Railroad in 1909—Klamath Falls was once one of the fastest growing cities in Oregon and was the largest shipping point between Portland and San Francisco.

Of course, it didn’t quite pan out that way. The swift, cataclysmic arrival of the Great Depression in 1929 brought the quickly-growing city’s lumber boom to an end, and with it—luckily if we do say so ourselves—the lack of ‘big city’ transformation. What Klamath Falls eventually became is something much more fitting: a town of immense character yet subtle easy charm… but we’re getting ahead of ourselves.

In the early days of Klamath Falls, long before it was called Klamath Falls, the area was originally inhabited by the Modoc, Klamath, and Yahooskin-Paiute peoples. These tribes roamed southern Oregon’s Klamath Basin for thousands upon thousands of years, with the land east of the Cascades proving fertile hunting and fishing grounds for time immemorial.

Beginning in the early 19th Century, the first non-indigenous colonizers—fur trappers, explorers, missionaries, settlers, and ranchers—began to arrive in the area. By 1843, the westward migration on the Oregon Trail as well as the Applegate Trail—blazed in 1846 as a safer alternative—was picking up steam. Shortly thereafter, a settlement in the Klamath Basin began. In 1867, the town of Linkville was formed at the mouth of the Link River by George Nurse. In 1893, the name was changed to the town of Klamath Falls and would eventually be incorporated as the City of Klamath Falls by state legislature in 1905.

Throughout the 20th Century, Klamath Falls experienced a steady if not modest evolution. Logging, even after its boom and bust of the early part of the century, remained a core industry until the late 1980’s when a shift in policy saw conservation and recreation become the new north stars.

Today, Klamath County is a place where a reverence for the land and its peoples is the ultimate ideal. The area offers an outstanding array of must-experience natural, cultural, and historical wonders.

How and Where to Experience Klamath Falls’ History Today 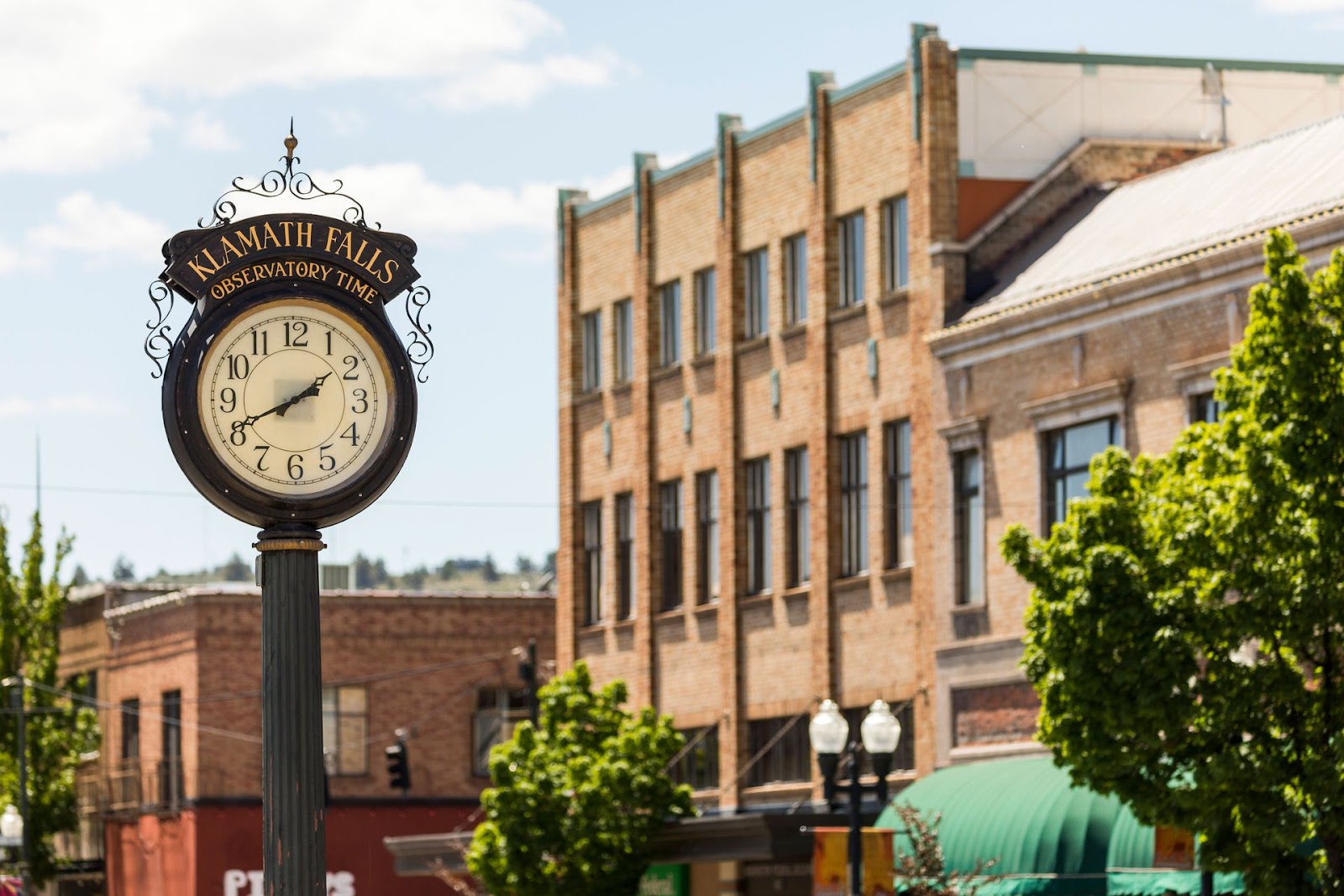 It’s time to explore the history of Klamath Falls! Photo by Kamrin Nielsen

Klamath Falls is a town that doesn’t don its historical heritage like an overproud badge of honor, so much as it wears it like a second skin. In other words, the history on display here is never performative nor in your face but rather alive and breathing and subtly everywhere. You can walk down the streets of Downtown Klamath Falls and feel the history steeped in the scenery and radiating deep in your bones.

In fact, simply taking a stroll or a self-guided tour is one of the best activities you can do in Klamath Falls to experience the history. 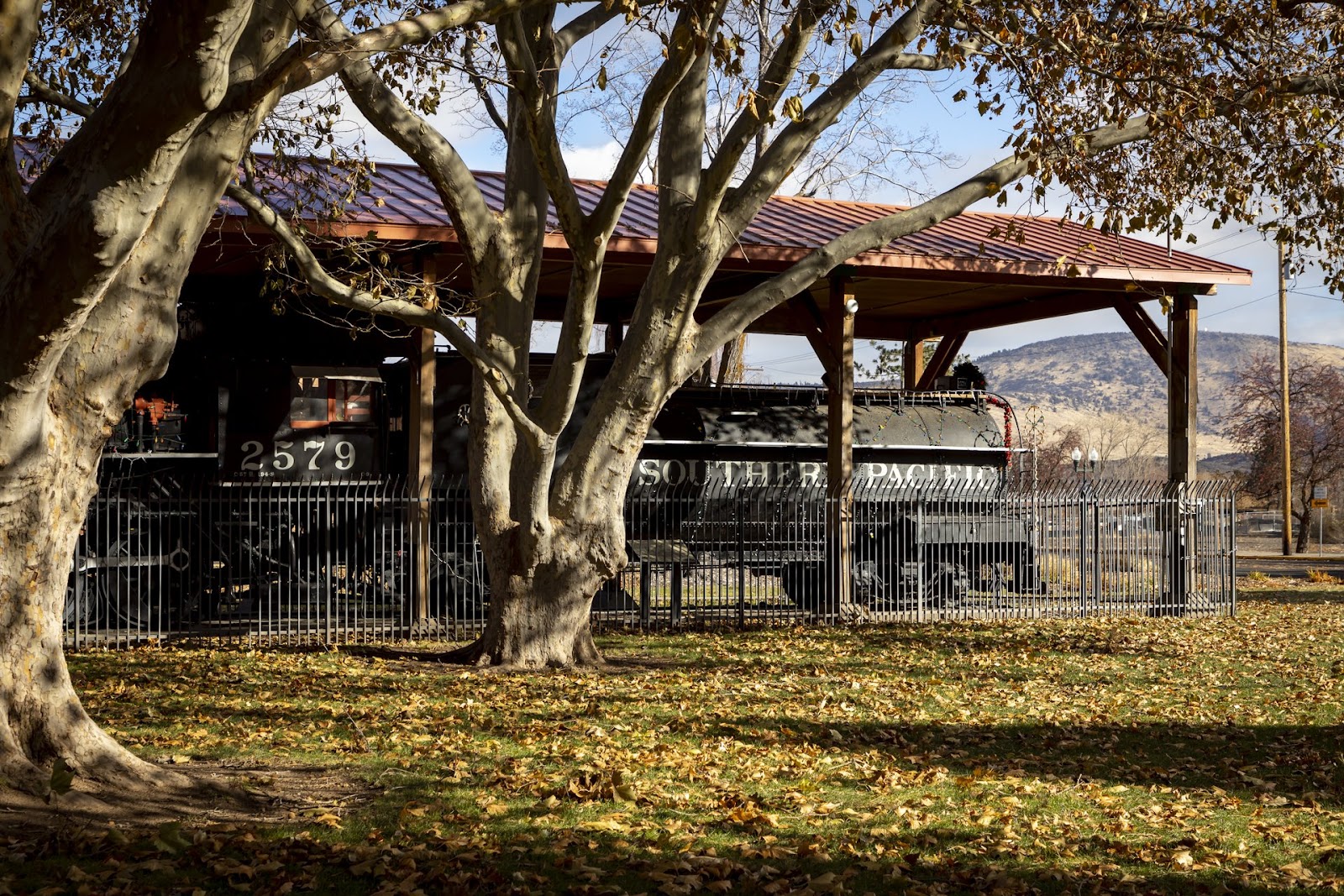 The Southern Pacific Engine 2579, one of the first stops along the Old Town Historic Walking Tour. Photo by Kamrin Nielsen

Hands down, one of the best ways to have an intimate dive into the area’s history is with a self-guided Downtown Walking Tour. Featuring a whopping 21 stops packed into a 1.5-mile route that primarily traces Main Street, this walking tour is about the best historical bang for your buck as you can find.

The tour begins at the Baldwin House—an 8,000 square foot mansion originally built in 1900 that today serves as the Klamath Advocacy Center—and ends at the Klamath County Museum—the county’s flagship history museum (more on this one later!).

In between, there are more than a handful of standout stops that both history buffs and architectural fanatics will love. 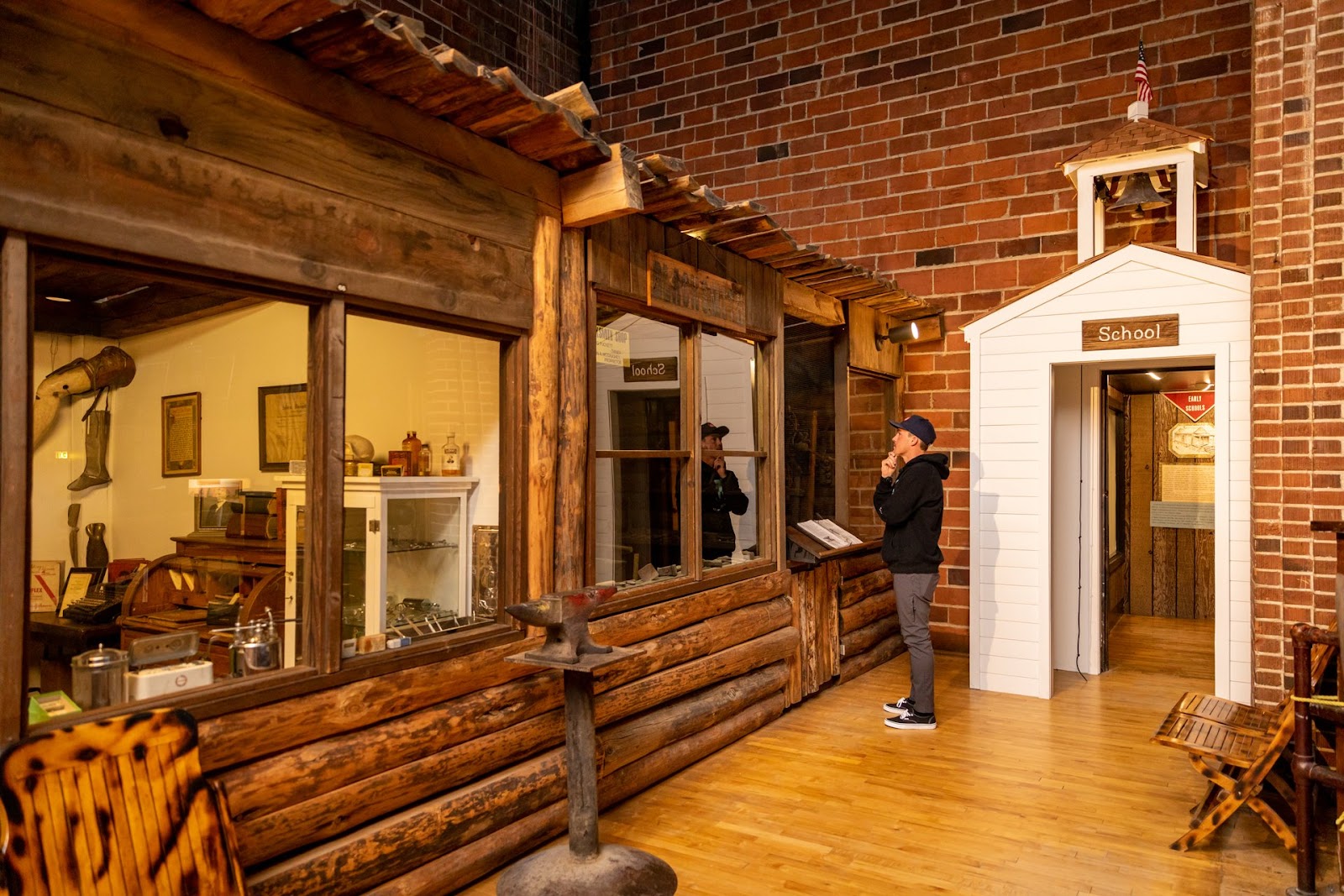 Soaking up the history in Klamath County Museum. Photo by Kamrin Nielsen

Beyond beautiful old buildings, however, Klamath Falls also fills these spaces with a huge lineup of fascinating historical and cultural museums.

The Favell Museum is an exceptional place to get some perspective on the original peoples of the Upper Klamath Basin. It houses 100,000-plus artifacts from both North and South America that represent some 12,000 years of human history.

A mere stone’s throw from Favell Museum, the Baldwin Hotel Museum, housed in the old Baldwin Hotel which was built in 1905, offers a time-capsule glimpse into old Oregon, featuring original furniture and rooms and a glorious array of local artwork and artifacts.

Serving as the last stop on the Old Town Historic Walking Tour, the Klamath County Museum is an absolute must for any Klamath Falls visit. Situated in the 1930’s-vintage Klamath Armory & Auditorium, the museum offers essentially a more in-depth, in-the-flesh dive into some of the talking points in this very blog article! From the area’s native cultures to the multiple chapters of Euro-American settlements, everything you’d ever want to know about the history of Klamath Falls can be found within this museum’s walls. 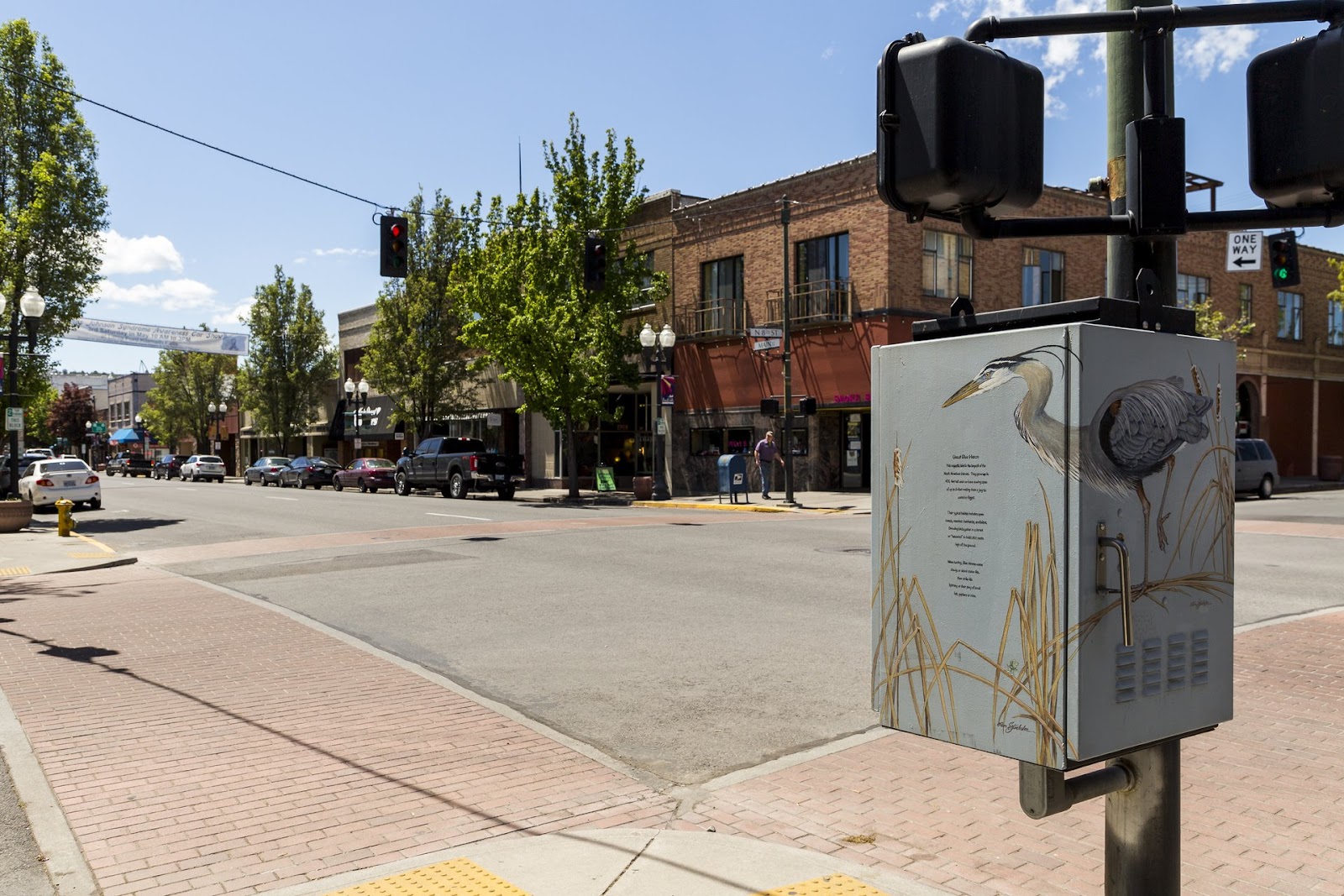 Culture lurks on every corner in Klamath Falls. Photo by Kamrin Nielsen

History is far more than just dates, facts, and figures. It’s also a looking glass into human culture. And Klamath Falls is no stranger to a rich and robust culture.

From curated public art displays and vibrant painted murals, to live music in Klamath Commons Park, Klamath Falls offers dozens of opportunities to experience the visual and performing arts that so shaped it.

Go on a treasure hunt for Klamath’s famous bird boxes—utility boxes repurposed into public art displays. Play a tune on one of the pianos laid out by the Klamath Piano Project. Catch a live performance at the historic 1940’s art deco-styled Ross Ragland Theater. There’s so much culture to experience, and the choice is yours! 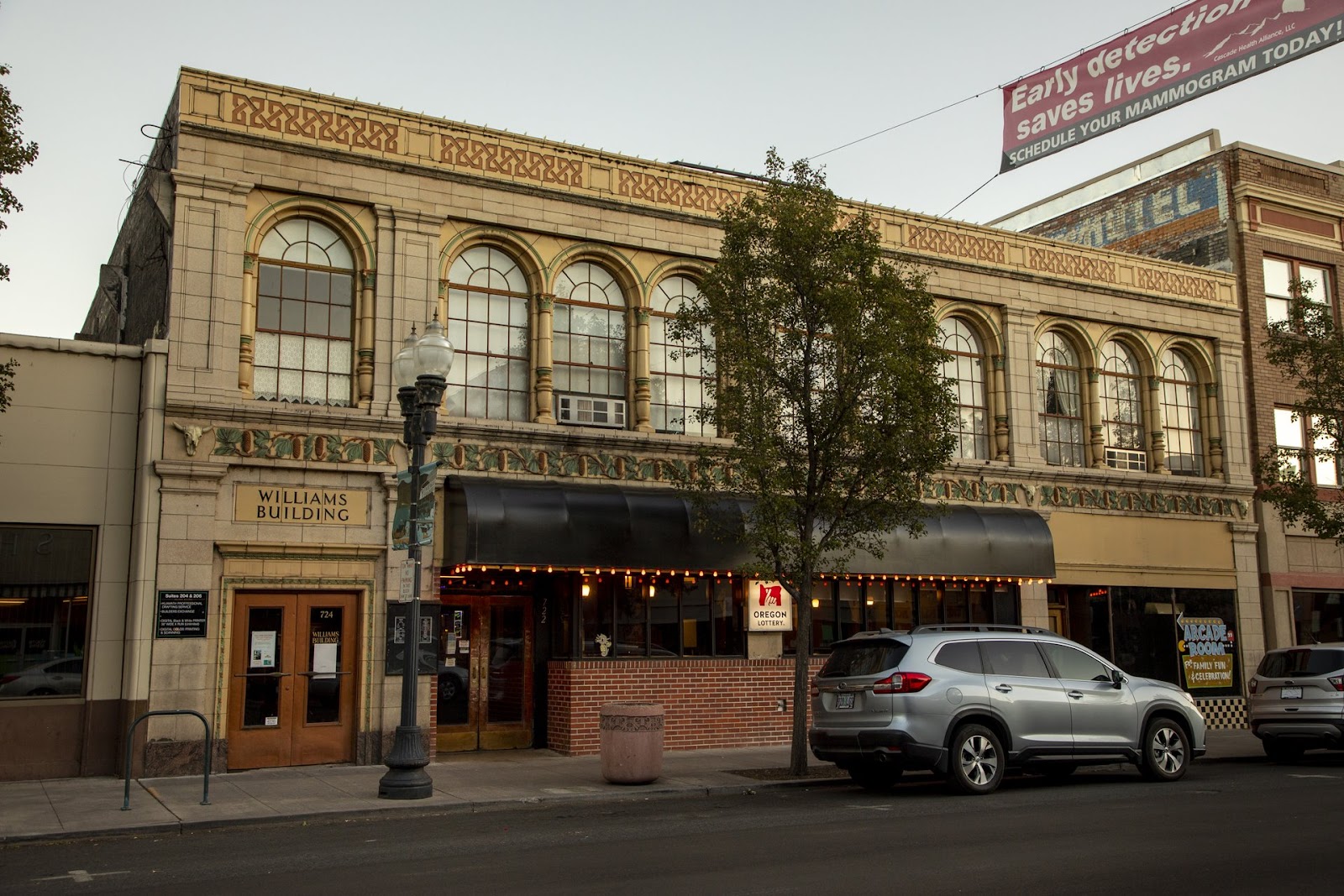 The historic Williams Building is one of 14 spots in downtown Klamath Falls listed on the National Historic Register. Photo by Kamrin Nielsen

Because who doesn’t love a good “Did you know” section?