Is Klamath Falls Worth Visiting

Why Klamath Falls, Oregon is Worth Visiting

Top Things to Do in Klamath Falls 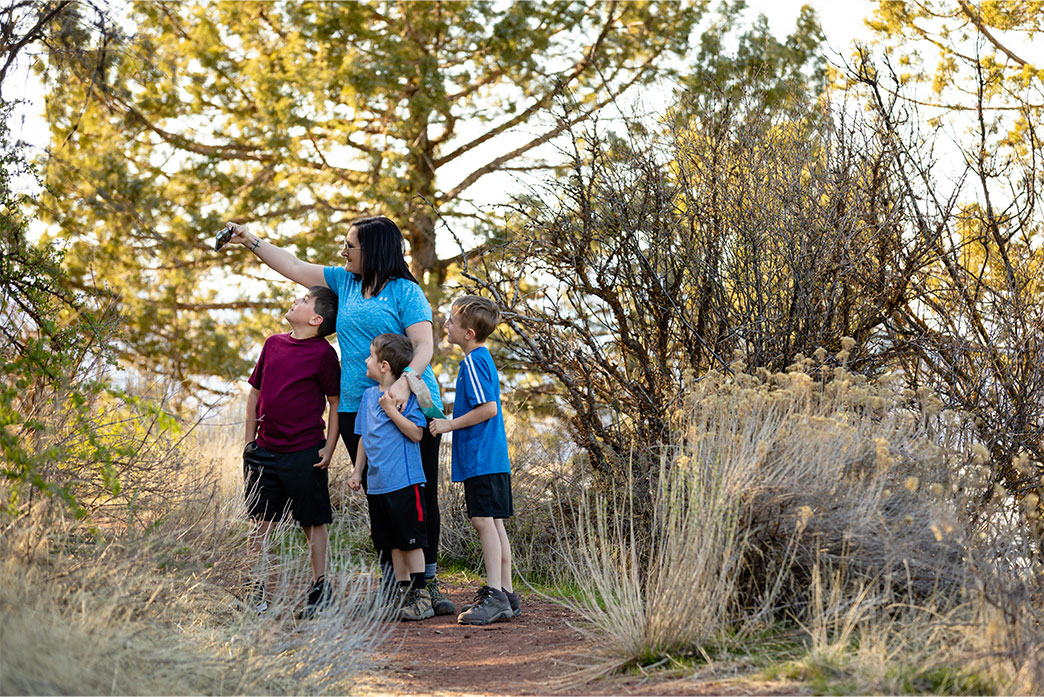 Looking for what to do in Klamath Falls on your next trip? For a fun getaway with plenty to do, look no further than Klamath Falls for your next trip idea. There is plenty to do in and near Klamath Falls including a plethora of outdoor recreation opportunities surrounded by wilderness and wide-open spaces. If you are looking for some fresh air attractions in Klamath Falls, the city offers over 600 acres of special use area parks and natural open spaces. (One of special note should be Moore Park.) If you are looking for some culture in the heart of the city, check out downtown Klamath Falls, home to specialty shopping, farmers markets, restaurants, cafes, art galleries, a historic walking tour with special places to see in Klamath Falls, and so much more. No matter where you are in the city there are plenty of places to visit near Klamath Falls. Within a 20 minute drive you can be outdoors hiking trails, riding bikes, fishing, paddling, or even playing in the snow depending on the time of year.

The Klamath Basin is a destination for all your outdoor adventures. There are over 6,000 square miles of trees, rivers and trails. Almost any outdoor activity can be done in or nearby Klamath Falls, including hiking, biking, fishing, water sports, winter sports, and so much more, but two outdoor activities in particular are quickly making a name for themselves in Klamath Falls: cycling and paddling.

​​With the Cascade Mountain Range to the west and high desert landscape to the east, the region just south of Crater Lake has some of the best cycling variety on the west coast. You can mountain bike at newly developed Spence Mountain or Moore Mountain Trail Systems, pedal along some incredibly scenic, low traffic country roads, or do a bit of both by trying out the 109-mile-long OC&E Trail, the longest state park in Oregon! Built on an old railroad bed, the first 17 miles of the trail are paved passing through Klamath Falls. Then grind some gravel as you make your way through Oregon’s Outback. Whatever way you prefer to peddle RideKlamathRide.com can help guide you to the best routes. 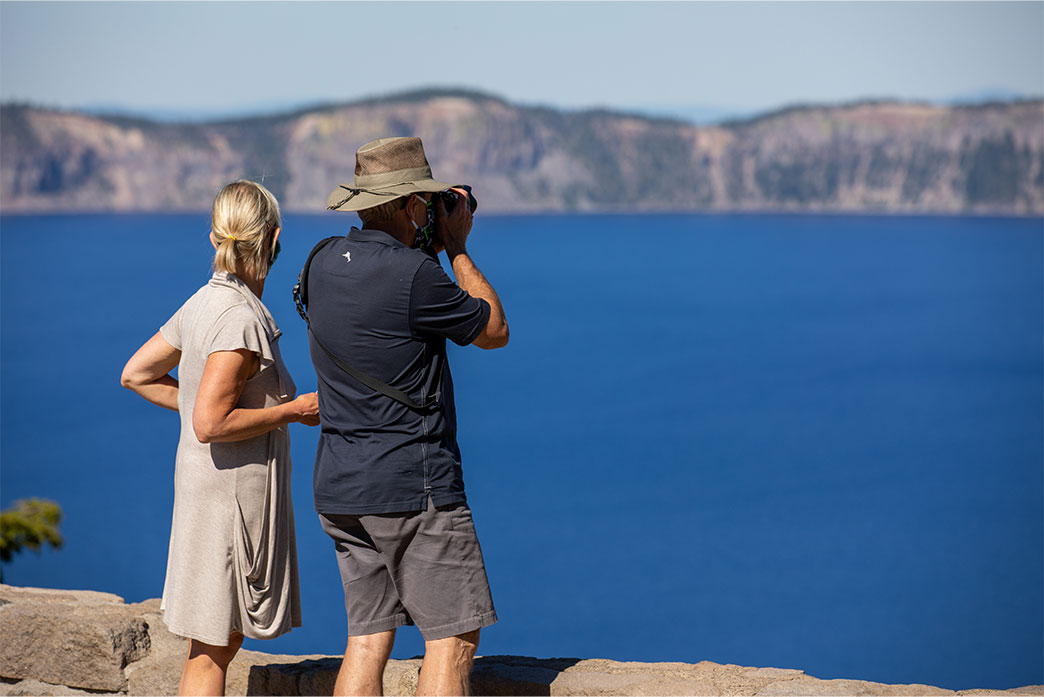 Crater Lake National Park is one of the iconic places to visit in Klamath Falls, Oregon.

There are so many places to visit in Klamath Falls Oregon. Listing top attractions in Klamath Falls cannot go without mentioning the area is known as the gateway to Crater Lake. This nearby well-known area offers an abundance of hiking trails, waterfalls, lodging and camping, and so much more. Crater Lake is Oregon’s only national park, and it is located here, in Klamath County. Crater Lake National Park is the deepest lake in North America, and one of the deepest in the world. The lake itself is awe inspiring with its brilliant sapphire blue waters, but the adventures to be had there are unparalleled. From hiking and snowshoeing to boating and swimming to waterfall chasing and dining, there’s something for everyone to see or do at this national park. 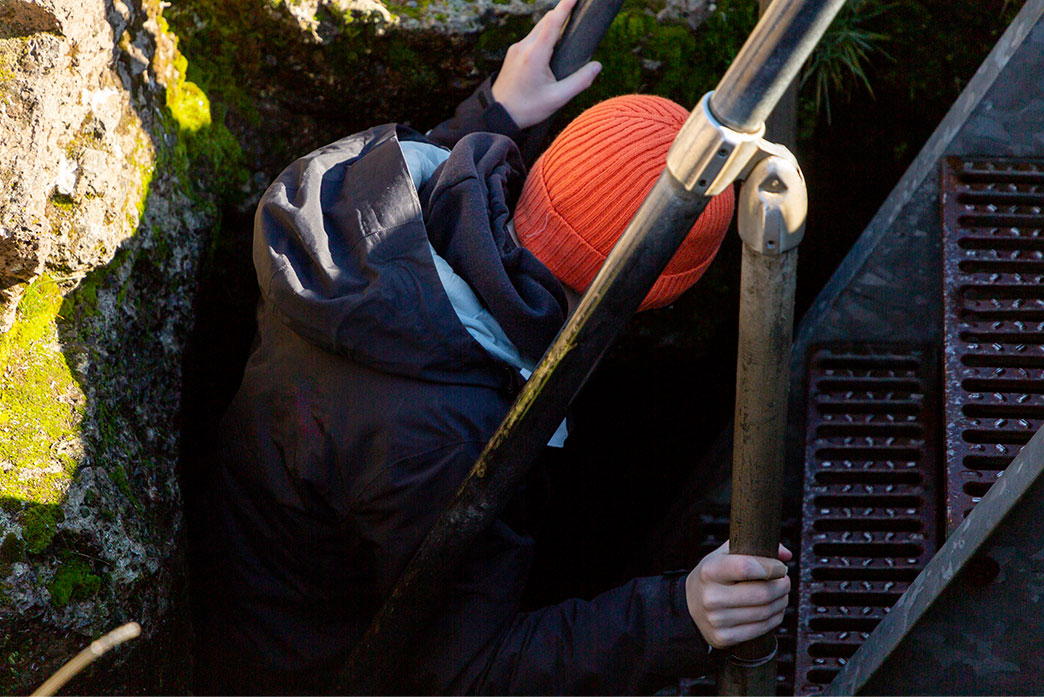 Descending stairs into a cave at Lava Beds National Monument.

No trip to Crater Lake or Klamath County is truly complete without also taking a trip to Lava Beds National Monument – just across the Oregon-California border. Hard-core spelunkers, families, and people wanting to experience the underground world for the first time can find it all at Lava Beds National Monument, which has more than 800 caves to explore, lava flows,  hiking trails, campgrounds, petroglyphs, Native American history and more.

Other must see attractions in the area include learning the history at the multiple museums and the world-renowned birding on the Klamath Basin Birding Trail. You can spend hours, or even a few days, learning about the history of the Klamath Basin with five museums to choose from, plus an audio tour that retells the history of the Modoc Indian War. In the community of Fort Klamath just south of Crater Lake is the Fort Klamath Museum which offers your first look at remnants of early Klamath Basin settlement times. The Klamath County Museum, Baldwin Hotel Museum, Favell Museum and Historic Downtown Walking Tour, all located in downtown Klamath Falls, offer a variety of history including Native American artifacts, iconic architecture, and a Japanese Balloon Bomb. The true history geek will find solace at the Merrill Museum and the Malin Historical Society in the southern area of Klamath County. Klamath Falls is also home to world-class bird watching, and one of the oldest annual birding festivals in the west – the Winter Wings Festival. There are six national wildlife refuges and over 350 different species of birds that can be found when you visit Klamath Falls Oregon. There isn’t a shortage of places to discover in Klamath Falls. Come see what makes Klamath Falls worth a visit to remember!

0 Comments on "Is Klamath Falls Worth Visiting"