A Guide to the Most Sought-After Fish in Klamath County

The Klamath Basin of southern Oregon is one of the greatest fish hotspots of the West. The geologic history of the watershed and unique geographic position straddling Cascadian and Great Basin bioregions shake out to quite the lineup of endemic (found nowhere else) fish, including the Klamath Lake sculpin, the Miller Lake lamprey, and the Klamath largescale sucker. The threatened, geographically isolated population of bull trout in the Klamath Basin is now considered the southernmost stock of this exceptional salmonid on the continent.

And then there’s the lineup of both native and introduced game fish that draw anglers from across the country to Klamath’s lakes and rivers!

In this guide, we’ll run down some of the most sought-after of those finned wonders and point you to a few choice spots to cast for them. 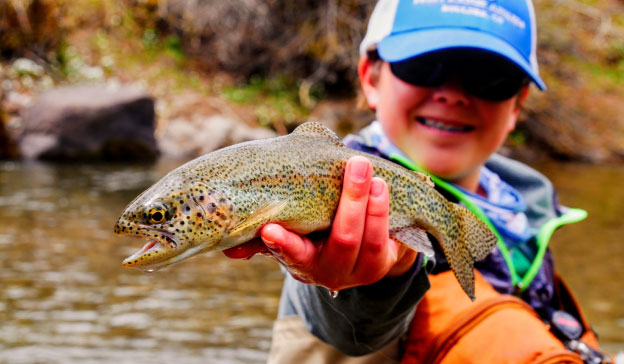 Klamath County is a world-class destination for anglers of all ages. – By Malachi Brooks

It’s not an exaggeration to call the Upper Klamath Basin one of the top trout destinations anywhere. That’s in large part due to the legendary Upper Klamath populations of Great Basin redband trout, an interior form of rainbow trout that reaches its heftiest dimensions in the conterminous U.S. in the Upper Klamath Lake/Agency Lake watershed.

These Upper Klamath redbands inhabit those sprawling bodies of water—remnants of the Pleistocene-time Lake Modoc—and their feeder rivers and headwater streams in a variety of distinct populations. The ability to move between fluvial (river) and lacustrine (lake) habitats give the Upper Klamath the most significant remaining share of redbands following this so-called “adfluvial” lifeway, though other redbands in the watershed migrate within rivers or kick back as residents in the upper creeks. (Evidence suggests those headwater redbands may be distinct enough to warrant their own subspecies status.)

The redbands of Upper Klamath and Agency Lakes reach pretty darn epic proportions, with the record fish spanning some 37 nose-to-tail inches and weighing north of 25 pounds.

Spring and fall are the best seasons to cast for monster redbands in the lakes, while the Williamson and Wood Rivers are nationally renowned trout streams with productive but challenging redband fishing, particularly in late summer and fall. Adventurous anglers also find rich rainbow opportunities on the Klamath River and the Sprague, though these are best fished with a guide.

You can also cast for native or stocked rainbow trout at such popular Cascade Range lakes as Lake of the Woods, Odell Lake, Crescent Lake, and Miller Lake.

A number of other introduced trout and char (fellow salmonids that, in North America, often have “trout” in their common name) tempt anglers in Klamath County. They include a true Old World trout, the brown trout, released in the U.S. in the early 1880s. You can fish for brown trout in the Williamson and Wood Rivers and a number of mountain lakes; the most celebrated spot is up on the doorstep of the Mount Thielsen Wilderness at Miller Lake, famed for its trophy-size browns and open for trout-fishing 24 hours a day.

Non-native char popular among Klamath County anglers include the widespread brook trout (which originally hails from eastern North America), found in many area rivers and lakes, and the biggest char of all: the lake or mackinaw trout. Indigenous to northern North America, ”lakers” have been stocked in only a handful of Oregon water bodies, three of which—Fourmile, Crescent, and Odell lakes—are in Klamath County. (Odell Lake produced Oregon’s state-record mackinaw: a 40-pounder.)

The beloved kokanee is the landlocked form of the sockeye salmon. Native in Oregon to the Grande Ronde and Deschutes drainages, the kokanee—which turns a brilliant red in spawning season—has been stocked in many other parts of the Beaver State, among them a number of Klamath County lakes: Get your kokanee-casting on at Lake of the Woods and Odell, Crescent, Fourmile, and Miller Lakes.

Here’s another genuine native Klamath County salmonid: a small, pale relative of salmon and trout found in the cold, clear water of high-country lakes and streams. Cast for mountain whitefish (which make plenty good eating, despite what you may have heard—especially smoked) at spots such as Odell and Crescent lakes.

The handsome—and tasty—yellow perch is native to a big swath of North America east of the Rockies, but it’s been widely introduced, including to many Oregon waters. Two classic (and wildly different) spots to cast for this cool water species in Klamath County are Lake of the Woods in the heavy-timbered Cascades and Gerber Reservoir out in the rimrock country east of Goodlow Mountain; both offer good ice-fishing for perch in the winter. 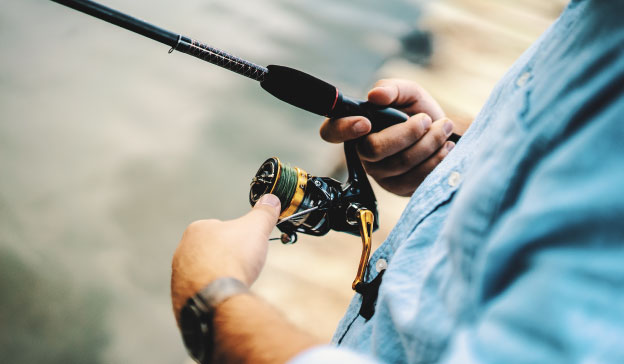 There are few better feelings than reeling in a big one. – By Evan Wise

Introduced populations of both largemouth and smallmouth bass diversity angling opportunities in Klamath County. Good bass-fishing grounds include Lake of the Woods, Davis Lake, the Sprague River, and such impoundments as Campbell, Gerber, Willow Lake, and J.C. Boyle Reservoir, set on the Klamath above its impressive canyon.

Both white and black crappie (more eastern North America immigrants) can be found in Klamath County. You can target these prized panfish at many locations, including Lake of the Woods and the Campbell, Willow Valley, Wilson, and Gerber Reservoirs (heads up: the latter produced the state record white crappie, better than four pounds).

Anglers with a taste for catfish have plentiful opportunities to catch the beautifully barbeled brown bullhead (how’s that for alliteration?) in Klamath County, including in Lake of the Woods, the Sprague and Lost rivers, and Gerber and J.C. Boyle Reservoirs. 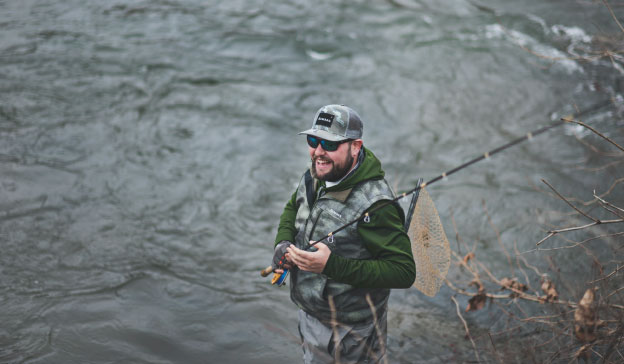 You’ll be all smiles too when fishing in Klamath County. – By Katherine Hanlon

Whether you’re a spincaster, a fly fisher, or both, you’ll have much to occupy yourself amid the gloriously diverse, fish-rich lakes and waterways of Klamath County. And keep in mind we haven’t exhausted the possibilities, species-wise, in the above roundup. To learn more about local angling, check out this Discover Klamath overview as well as this article, which also includes a few great local bait shops, outfitters, and guides for boosting your success out there.