Top 5 Reasons You Should Live in Klamath Falls

Klamath Falls is located in a rural and scenic part of Southern Oregon. In the high desert just east of the Cascade Mountain Range, and only 17 miles north of the California – Oregon border is Klamath Falls. Klamath Falls is surrounded by mountains and natural beauty making it an outdoor enthusiasts paradise. While Klamath Falls is a smaller, mid size city, it does have many urban amenities of a larger city. It’s desirable location in the state gives much appeal to living in Klamath Falls, Oregon, like unexpected dining pleasures, theater and arts, museums, specialty shopping, farmers markets, locally owned restaurants and cafes, and a variety of architecture. Below are our top five reasons why someone would want to live in Klamath Falls and surrounding area. 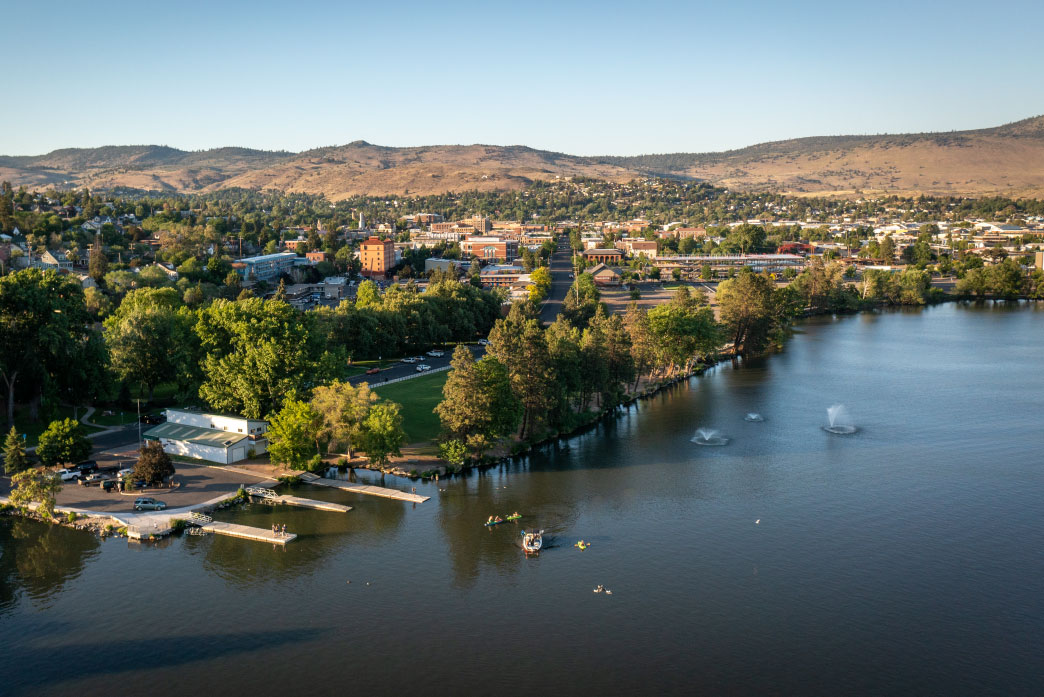 Known as the “City of Sunshine”, Klamath Falls sees over 300 days of sunshine each year. While most people think Oregon is full of rainy weather, the eastern side of the Cascade mountains provides a high desert climate perfect for being outside as much as possible. At roughly 4,100 feet elevation, the refreshing high-desert climate averages temperatures in the summer of 85°F and in the winter 38°F, making Klamath Falls Oregon weather comfortable year-round. Living in Klamath Falls you can truly experience all four seasons each year. Snowfall usually happens from late November – early March. Klamath Falls air quality is generally very good, outside of fire season in late summer months. 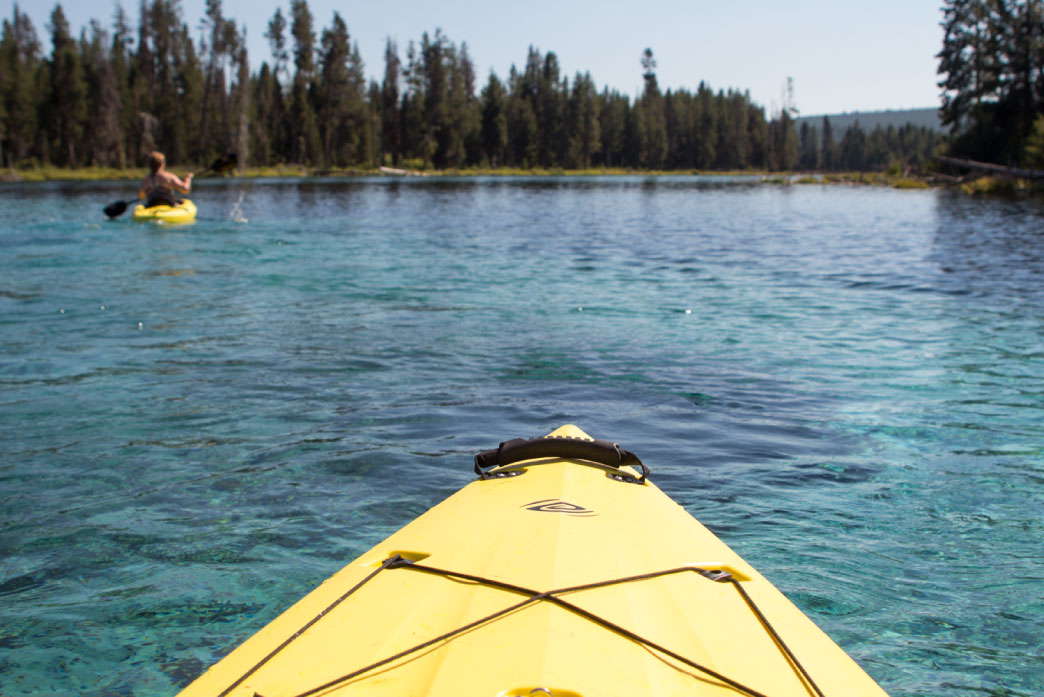 Kayaking on Spring Creek during the summer is a locals favorite.

Klamath Falls is well-known for outdoor recreation. Surrounded by wilderness and wide-open spaces, Klamath is a great place to enjoy year-round outdoor recreation from summer cycling and hiking, to snowmobiling and cross-country skiing in the winter. Living in Klamath Falls OR is the ideal location for an outdoor enthusiast. No matter where you are in the city, within 20 minutes you can be outdoors hiking trails, riding bikes, fishing, paddling, or playing in the snow depending on the time of year.

The Klamath Basin is a destination for all your outdoor adventures. There are over 6,000 square miles of trees, rivers and trails. Almost any outdoor activity can be done in or nearby Klamath Falls, including hiking, biking, fishing, rock climbing, water sports, winter sports, and so much more. Not to mention the many wildlife refuges, Klamath Falls is home to world-class bird watching, and one of the oldest annual birding festivals in the west – the Winter Wings Festival. With nearby Crater Lake National Park and Lava Beds National Monument, plus a number of state parks and wilderness sites there isn’t a shortage of places to discover nearby Klamath Falls. 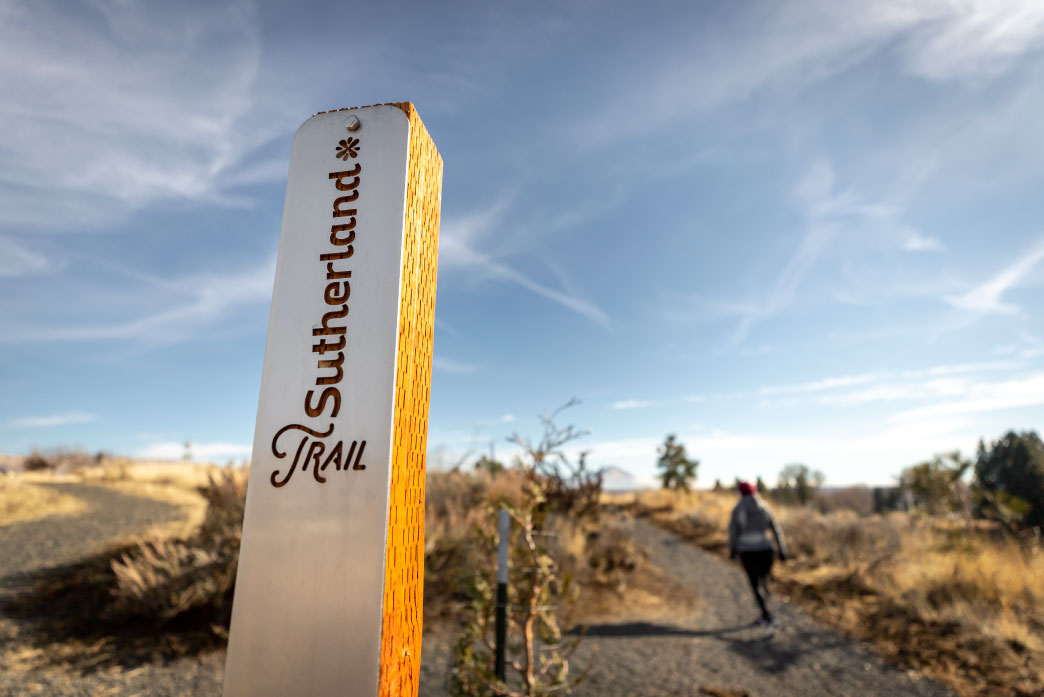 Hiking the new Sutherland Trail, an initiative brought forth by the Blue Zone Project.

In December 2020, Klamath Falls achieved certified Blue Zones Community status which recognizes the Klamath Falls’ community’s well-being transformation through successful implementation of the Blue Zones Project. The Blue Zones Project is a community-led well-being improvement initiative designed to make healthy choices easier through permanent changes to a city’s environment, policy, and social networks. The community of Klamath Falls working together for this high achievement is a great reason to live in Klamath Falls. As part of the initiative for healthier living, community members have created smoke free events and new parks and trails for anyone living, working, or visiting Klamath Falls to use. Klamath Falls is also home to Sky Lakes Medical Center, an internationally accredited acute-care teaching hospital dedicated to the people it serves.

Rural living doesn’t have to mean no amenities. Klamath Falls was once one of the fastest growing cities in America in the late 1800s and early 1900s and the variety of architecture reflects the diversity that settled and grew the town and region. Historic downtown Klamath Falls features unexpected dining pleasures, theater, art galleries, museums, specialty shopping, farmers markets, restaurants, cafes, and many other local businesses, plus a variety of architecture. One of the benefits of living in rural areas is the small town, locals feel, and downtown Klamath Falls brings that culture alive while still offering amenities found in bigger cities.

An Affordable Place to Live in Oregon

One of the advantages of living in rural areas is the lower cost of living. The affordable cost of living in Klamath Falls Oregon is a major attraction to existing and prospective residents. Compared to many similar cities in the Northwest, living expenses are much more cost-effective in the Klamath Basin and many from the larger cities of California and Oregon are beginning to realize it. This allows residents to enjoy the sunny high desert climate and breathtaking Oregon scenery with a much lower price tag. Klamath Falls is one of the more affordable places to live in Oregon. All the more reason to become a Klamath Falls resident.