Meet the Volcanoes of the Volcanic Legacy Scenic Byway

The Pacific Northwest’s position along the so-called “Ring of Fire” gives it a dramatic geological backstory (not to mention some of the most flat-out glorious scenery in North America). A goodly share of that scenery lies along the the Volcanic Legacy Scenic Byway: an All American Road kicking off at its northern end on State Highway 138 south of Chemult in Klamath County and running its vista-bedazzled way down to the far southern end of the Cascade Range in Northern California.

A plethora of shield volcanoes, cinder cones, stratovolcanoes, lava fields, and other volcanic features shoulder this route. To give you a taste of the grandeur and dynamism of the corridor’s landscapes, we’re going to take the opportunity to spotlight a few of the grandest landmarks visible along the way—including some of the signature natural icons of Klamath County itself.

A signal peak of the Volcanic Legacy Scenic Byway’s northern arm of Highway 138–and another eye-catcher on the horizon from Crater Lake’s escarpment—9,182-foot Mount Thielsen is one of the most striking summits in the country: a great fang, whittled down by the patient grind of glaciers since it stopped bulking itself up some 290,000 years ago. (A little glacier, in fact, still resides in a cirque on its shady northern shoulders: the Lathrop Glacier.) It’s easy to see how Thielsen’s earned its nickname of “the Lightning Rod of the Cascades,” but that label isn’t just a lyrical one. This mighty spire does indeed attract its fair share of thunderbolts, as the abundance of lightning-struck shards of rock on its summit attests to.

Mount Thielsen, which rockets upward on the east side of Diamond Lake, about a dozen miles north of Crater Lake, is one of the spectacularly eroded, toothy peaks that author Stephen L. Harris, who penned the trusty Fire Mountains of the West, described as “Matterhorns” of the Oregon Cascades. 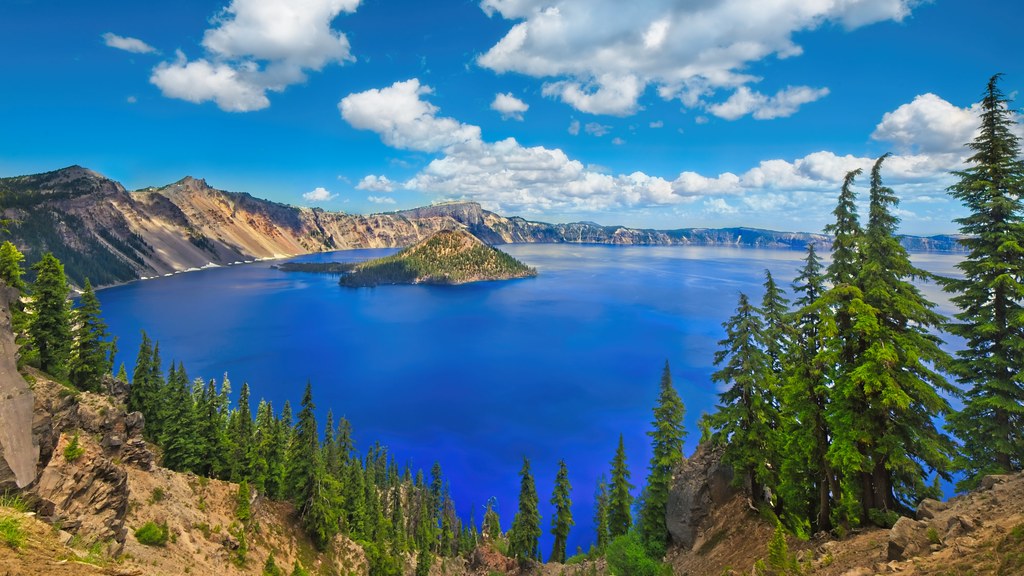 You may know Mount Mazama by its more common name: the one and only Crater Lake, by Jim Choate

Before essentially blowing its top off about 7,700 years ago, Mount Mazama stood perhaps 11,000 feet or so—a Mount Hood-sized stratovolcano. Even within Oregon, you may run into people who’ll scratch their heads at the mention of Mazama, but the fame and name recognition of the body of water occupying its convulsed-open crown—one Crater Lake—are worldwide. Mount Mazama’s the centerpiece of Oregon’s only national park—the seventh established in the U.S. back in 1902–and it’s not at all hard to see why this place enjoys the honor: Crater Lake’s dazzlingly clear depths and raw caldera tub create downright dreamy volcano-top scenery that surely must take its place among the planet’s most beautiful mountainscapes.

The magisterial 8,036-foot shield volcano of Pelican Butte, topped with a cinder cone, swells out of the Cascadian forest to the near northeast of Mount McLoughlin, its eastern toeslope easing into the marshy lowlands of the Klamath Basin. If you make the summit trek, indeed, you’ll likely spend as much time admiring the sightlines down into the liquid-shimmering Basin as you do those up and down the spine of the Cascades. 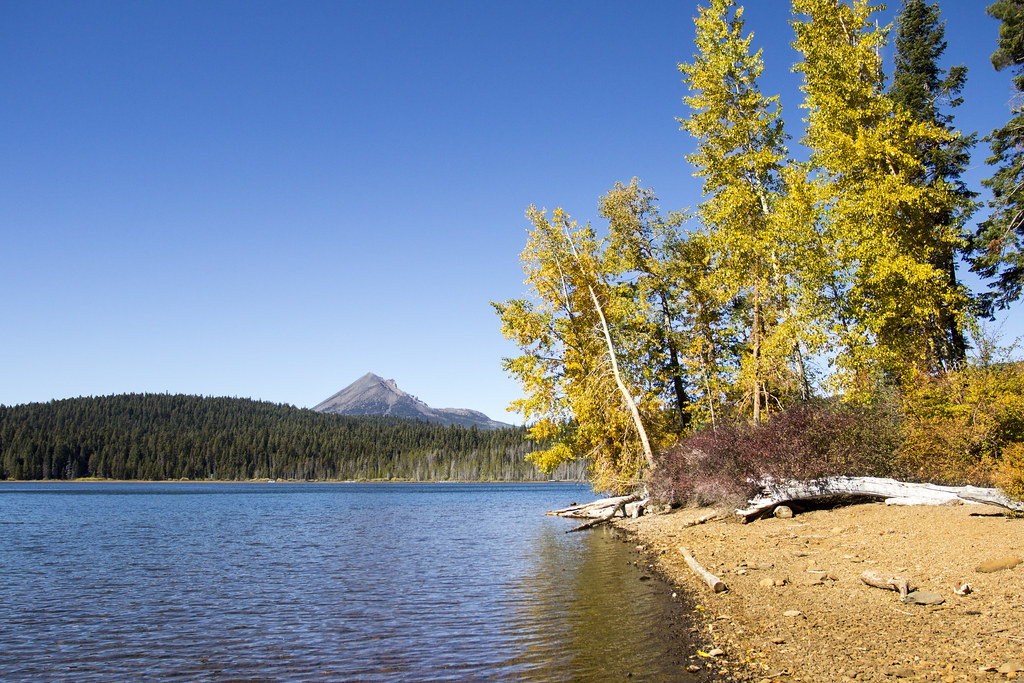 Mount McLoughlin’s steep, smooth-sided cone from Lake of the Woods, by Bonnie Moreland

Gouged out on its north side, Mount McLoughlin appears as a steep, smooth-sided cone from other vantage points—including those available from the Klamath Lake lowlands. This 9,496-foot basaltic-andesitic pillar, the apex of the Sky Lakes Wilderness, is the southernmost of the great High Cascade volcanoes of Oregon. It’s the loftiest peak along the Cascade Crest between Shasta and Central Oregon’s Three Sisters, and its dusty summit is reachable via a non-technical, but huff-and-puff sort of hike involving about 4,000 feet of elevation gain. Even if you aren’t tackling the climb, you can bask in Mount McLoughlin’s impressive shadow (and maybe do some casting, while you’re at it) at such utterly postcard-worthy vantages as Lake of the Woods and Fourmile Lake.

It may not have the dramatic, steep-sided profile of Mount Thielsen or Shasta, but the Medicine Lake Volcano in far northeastern California is an absolute giant—one of the great volcanoes of North America. Sprawling across close to 800 square miles and accounting for 140 cubic miles or more of volume, this epic shield volcano is the most massive of the Cascade region (rivaled only by the similar Newberry Volcano of central Oregon). It’s well east of the Cascade crest and straddles the line, geologically speaking, between the Cascade Volcanic Arc and the Basin-and-Range Province.

The top of the Medicine Lake Volcano, which began erupting within the past 500,000 years, is a roughly 4-by-7.5-mile caldera containing Medicine Lake itself. The east flanks include the most recent emission of the shield, the roughly 900-year-old Glass Mountain flow of obsidian. Along the north-northeastern edge of the Medicine Lake shield, meantime, Lava Beds National Monument includes a great scabland of mainly basaltic flows—dominated by releases from Mammoth Crater—which include a spectacular concentration of lava-tube caves.

Studding the gentle northern footslope of the Medicine Lake Volcano, Schonchin Butte is a prominent andesitic cinder cone rising close to 500 feet above its base. Its Schonchin Lava Flow predates the Mammoth Crater basalts, which were diverted around it. Schonchin Butte is the only cinder cone in Lava Beds National Monument with a trail to the summit, and it’s well worth taking that 0.7-mile (one-way) trek—partly to appreciate the historic, active fire lookout tower up top, first staffed in 1941, and mostly to ooh-and-aah over the tremendous views. 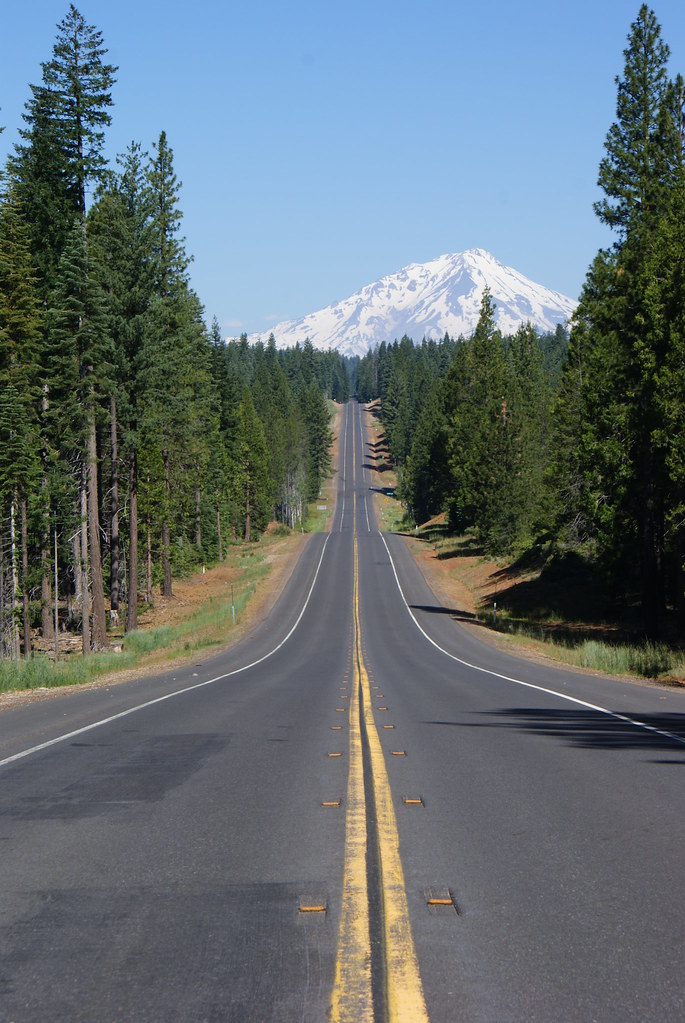 The road to Mount Shasta, by Blake Carroll

Mount Shasta, of course, isn’t actually within Klamath County, though it glowers down upon the Northern California portion of the Volcanic Legacy Scenic Byway. But this utter behemoth of a snowpeak is so prominent from Crater Lake, Pelican Butte, and other Klamath vantages, we thought it’d only be right to give it a shout-out. At 14,162 feet, Mount Shasta is the second-highest peak in the Cascades after Mount Rainier. Boasting anywhere from 85 to 90 cubic miles of material, it’s actually bulkier than that king summit of Washington State. With its massiveness and aloofness, it’s as commanding a mountain as you’ll find anywhere.

A distinctive feature of Mount Shasta’s profile is, on the west side, the sharp buttress of Shastina (which if taken by itself would be, at 12,300 feet, the third-loftiest Cascade peak). 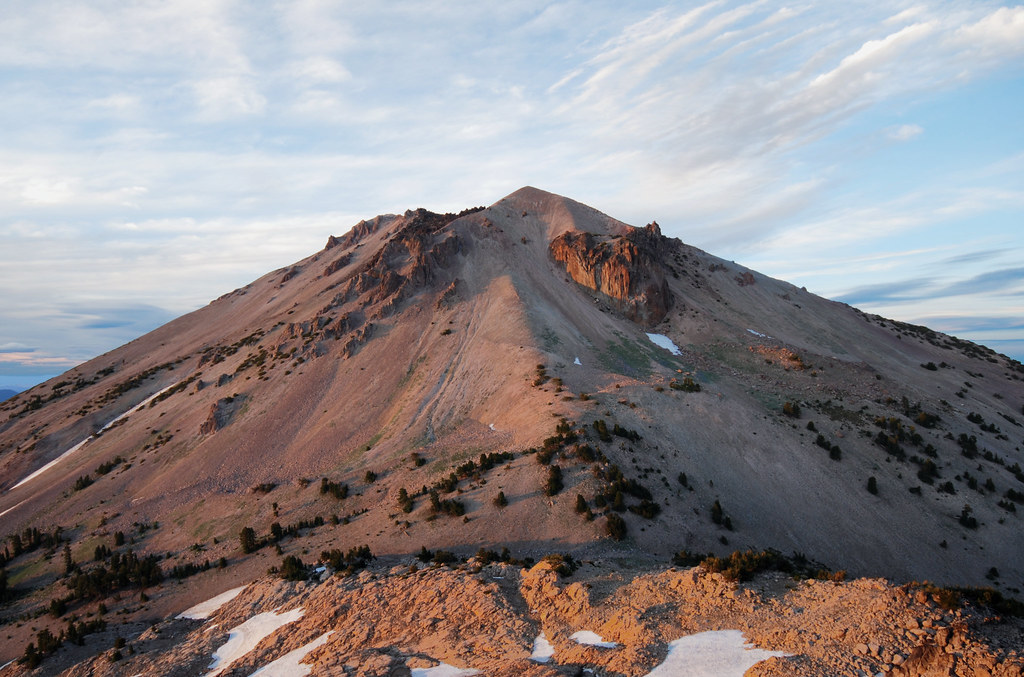 The titanic lava dome of Lassen Peak, by LassenNPS

Until Mount St. Helens let loose in 1980, Lassen Peak—the southernmost great volcano of the Cascades—was responsible for the most recent major volcanic eruption in the Lower 48 states. The aftermath of that May 22, 1915 blow, plus a variety of other showstopping geologic features, are on full display in another bigtime highlight of the Volcanic Legacy Scenic Byway: Lassen Volcanic National Park.

Lassen Peak is not a stratovolcano like most of the best-known Cascade summits but a titanic lava dome—among the largest known anywhere. The May 1915 eruption, part of a several-year cycle of activity, produced a surging column that could be seen on the Pacific coast, and showered ash over Winnemucca, Nevada about 200 miles to the east.

The national park presents a who’s-who of volcano types: besides lava domes, also various cinder cones, shield volcanoes, and remnants of an eroded-down stratovolcano giant, Mount Tehama. Plus you’ve got quite the burbly, colorful collection of mudpots and other geothermal features to marvel at.