There is an abundance of fishing in the Klamath Basin whether you are into angling or fly fishing. The area is home to various types of fish but the plentiful rainbow trout is what really draws people from all over the world. The Klamath Basin is home to the best wild native rainbow trout fishing in the Lower 48. With multiple rivers and lakes in the area, Klamath Falls is definitely a top fishing destination in Oregon. 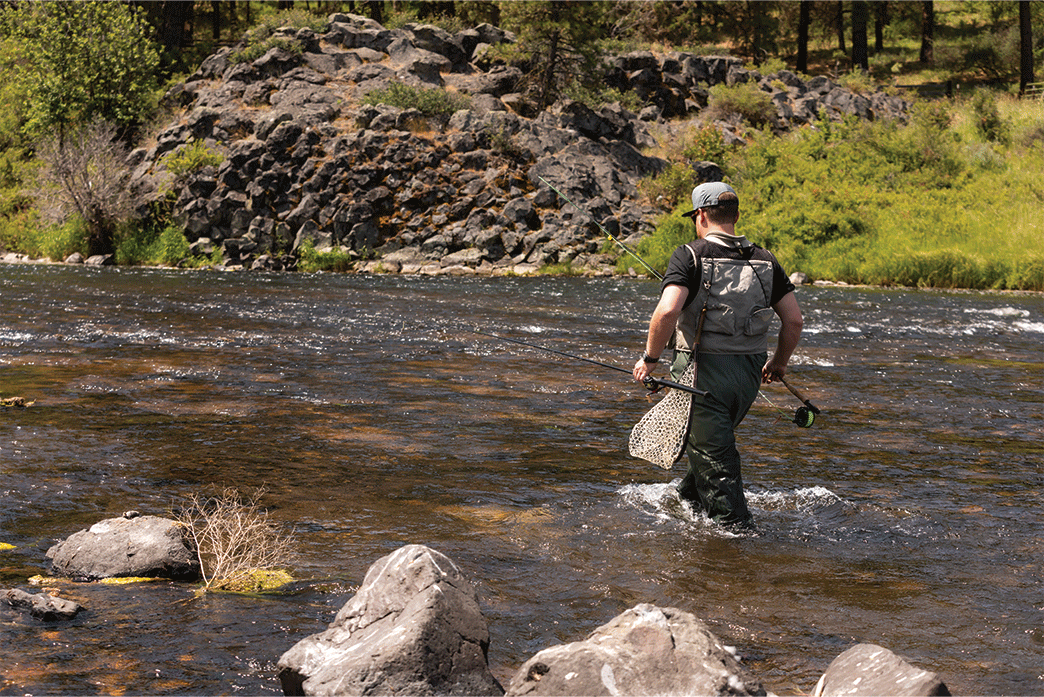 The Williamson River, one of two major inflows feeding Upper Klamath Lake, holds its own with any of the great trout rivers of the West. Those Upper Klamath redband rainbow trout spend a lot of time in the Williamson, where you can spin cast and fly fish for them on a catch-and-release basis between spring and fall. The river’s hugely productive, but the prized trout are wily. Although much of the fishing on the lower Williamson is done by drift boat, you can find good bankside opportunities at the riverfront park in Chiloquin as well as just a bit upstream at Collier Memorial State Park. Tapping the local know-how of a guide is also a smart way to go for Williamson River fishing.

The Link River connects Klamath Lake to Lake Ewauna. Link River fishing is open year-round and allows retention of one fish over 15 inches in length, but catch and release is strongly encouraged as these fish are wild and have infinitely more sport value than food value. You can use flies, lures, or bait in the Link River, though fly fishing is tough given the strong current and thick foliage on the bank. Most Link River fishers are known to take the short walk downstream to enjoy Lake Ewauna fishing as well.

Lakes provide a great way to fish from a boat and enjoy the water. Upper Klamath and Agency Lakes are popular in the Klamath Basin where you can use flies, lures, or bait. Upper Klamath Lake Fishing may have you landing your biggest redband rainbow trout yet! Rocky Point, along the west shore of the lake, is notorious for housing the trophy sized fish. Klamath Lake fishing is open year-round, but the redband trout found here are highly migratory. Fish move into the lake to feed during the spring and fall and to the rivers come winter and summer.

Lake of the Woods is in close vicinity to Klamath Falls and is home to more variety of fish than any other lake in Klamath county including rainbow trout, brown trout, kokanee, small and largemouth bass, yellow perch, crappie, and bullhead catfish. Come winter, Lake of the Woods is the perfect place to take the family and show them the ropes of ice fishing.

Other lake fishing near Klamath Falls Oregon can be found at Odell Lake, Crescent Lake and Miller Lake. Crescent and Odell Lakes are close to each other and make for a great weekend outing with the family as both offer camping and cabins. Odell Lake Fishing may be some of the most sought after in Klamath County. Odell Lake is 300 feet deep in many places and provides ideal habitat for a healthy kokanee salmon, as well as native and hatchery rainbow trout stocks and native mountain whitefish. These two species fuel its most popular fishery: lake trout. This is one of just four lakes in Oregon with lakers (the others being Crescent, Cultus, and Fourmile). Crescent Lake is Odell’s little brother. It’s not quite as deep, but it offers great fishing. Crescent Lake fishing offers lake trout (including monster mackinaw), brown trout and kokanee, with scattered mountain whitefish and some rainbow trout.

If you want to land a trophy-sized brown trout, head to Miller Lake located west of Chemult. Miller Lake is stocked periodically with brown, brook and rainbow trout and kokanee salmon, making Miller Lake fishing a favorite in Klamath County. There are trophy browns available at Miller Lake, but most rainbows and kokanee are small. It is uniquely suited to targeting trophy browns, as you can fish for trout 24 hours a day here — increasing your odds of landing a night-feeding brown trout.

Guides for Fishing Near Klamath Falls

There are multiple fishing guides in the Klamath Basin largely focused on fishing on the Klamath River. If you are looking for an expert to help show you the way, check out the local fishing guides and outfitters in the area. Additionally, whether you are an angler or fly fisherman, it’s important to stock up on the essential fishing gear to prepare for your next fishing trip.