Heading east out of Klamath Falls, natural wonder abounds behind every hillside and around every bend in the river. Grasslands of sagebrush and juniper give way to quiet pine forests, which give way to sparse river valleys, which give way to wetlands that welcome thousands of migrating birds every winter.

And there may be no finer way to see this stunning scenery than with the wind in your hair while riding the 109-mile-long OC and E Woods Line State Trail.

Oregon’s longest linear state park begins in Klamath Falls before heading northeast into the forests and valleys of the broader Klamath Basin. And while the trail is open to all forms of non-motorized recreation, it is best enjoyed from the seat of a road bike (if sticking close to Klamath Falls) or mountain bike (if exploring the region’s most remote reaches).

So if you want to hop in the saddle and see the region’s wonder for yourself, here’s a guide to the acclaimed OC and E Woods Line State Trail—how such an improbable trail formed, what you’ll see along its four sections, and what you need to know before setting out.

What is the OC and E Woods Line State Trail? 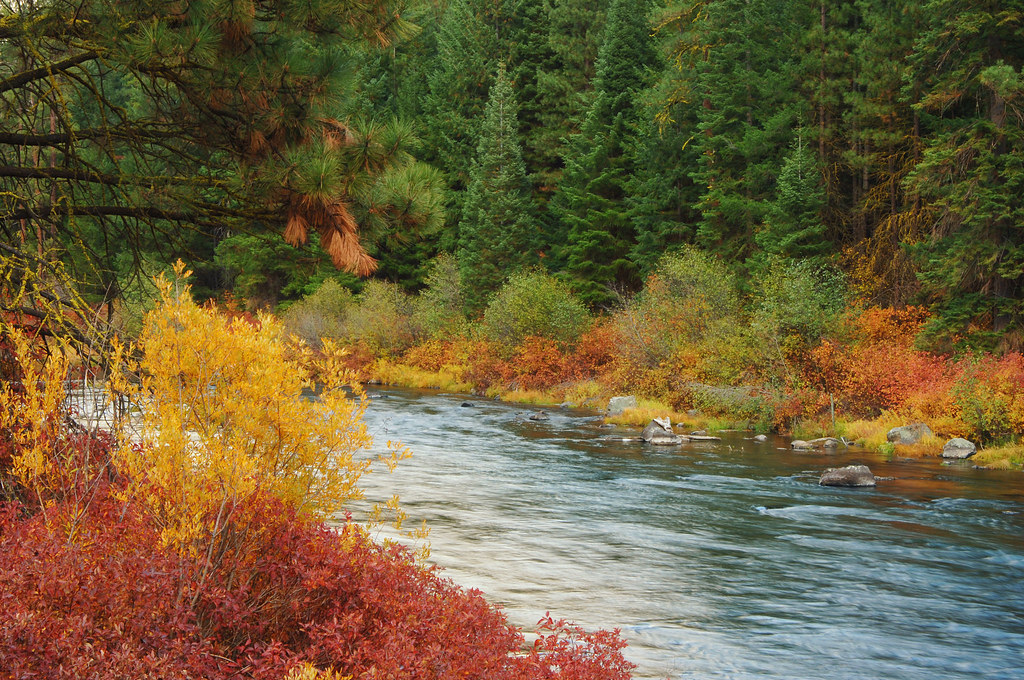 The modern-day OC and E Woods Line State Trail traces its history back more than a century, when journalist Robert E. Strahorn envisioned a railroad that would connect Klamath Falls with nearby communities—and support the region’s nascent logging community.

Construction on the Oregon, California and Eastern Railroad (OC&E) began in 1917; just two years later, the fast-growing railroad was served by four lumber mills and many more logging camps. At its peak in the early 20th century, the OC&E railroad moved as much as one million board feet of lumber per day.

The demise of Oregon’s logging industry meant the end of the line for the OC&E railroad in 1990, and the onetime railroad was turned over to the Oregon Parks and Recreation Department to spur the creation of a rail-to-trail conversion.

Today, the OC and E Woods Line State Trail measures 109 miles and is officially Oregon’s longest linear park. Open only to non-motorized recreation, it begins in Klamath Falls before heading northeast and into more rural, rugged terrain. Paved sections of the trail (in and around Klamath Falls) are popular with joggers, walkers, and road cyclists, while sections of dirt and gravel in the trail’s more remote reaches draw mountain bikers all year long.

What Do the Different Sections of the OC and E Woods Line State Trail Cover? 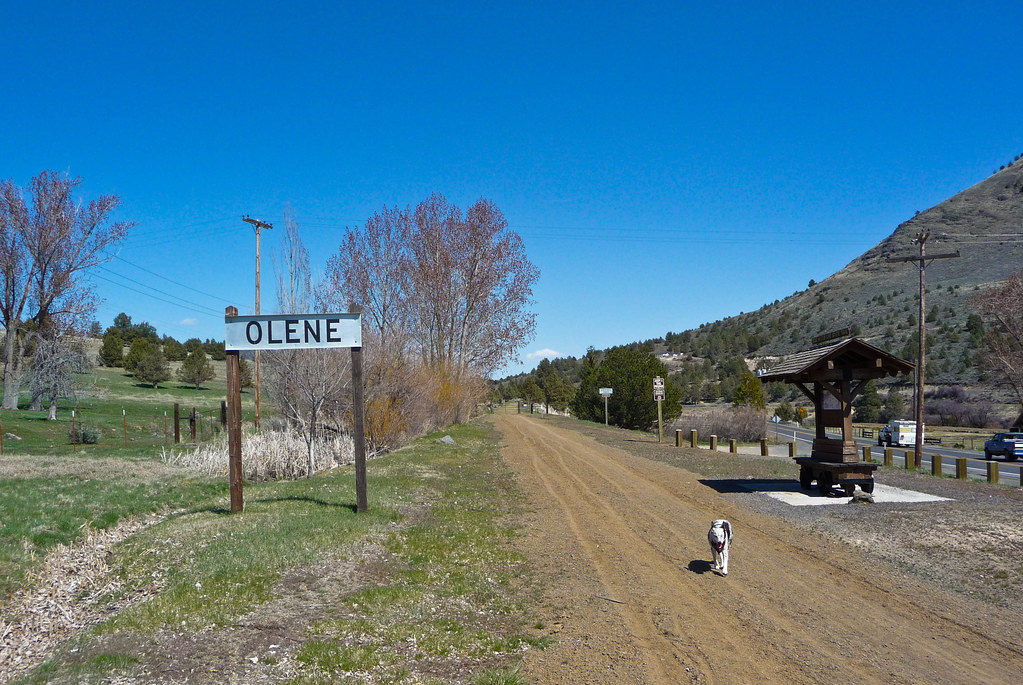 Olene and beyond is where the trail transforms from paved to unpaved. – By Michael McCullough

Olene and beyond is where the trail transforms from paved to unpaved, by Michael McCullough

Broadly speaking, the continuous OC and E Woods Line State Trail can be broken down into four disparate sections, each offering different landscapes and experiences that cater to riders of all skill and experience levels. Those four sections include the following:

The first 7.5 miles heading east from Klamath Falls are paved, making them popular with joggers and bicyclists alike. Views change drastically here, ranging from cityscapes to farmland to rolling hillsides (all along a gentle grade). As the trail arrives in the community of Olene, the pavement ends at a gate, which users should close behind them; beyond Olene, the trail is entirely unpaved.

Here the OC and E Woods Line State Trail turns to gravel and challenges riders with more difficult terrain. The rewards are worth it along this 31-mile stretch of trail as it passes through open forests of juniper and sagebrush before heading into thicker forests of pine and fir. Olene Gap, a narrow opening in the mountains east of Klamath Falls, is one of this section’s most scenic highlights.

This 24-mile stretch descends into the Sprague River Valley, long a bustling region for logging and ranching, before paralleling the Sprague River (which it does for much of the ride from here on out). Keep an eye out for marmots, bull snakes, and other wildlife, as well as waterfowl looking for their next meal in the Sprague River. One of the scenic highlights along this stretch includes Devil’s Garden, the remnant of an old volcano that has been worn down by time – and is today a series of ridges and dunes. Gravel, loose rock, and knee-high grass dominate the trail surfaces here.

The 33-mile spur heads north through farmland and Klamath Basin forests – and shows off some of the trail’s most popular sights. In particular, the 400-foot-long Merritt Creek Trestle towers 50 feet over Merritt Creek and is a joy to ride (and photograph). North of the trestle is Sycan Marsh; the grassy wetlands are home to migrating and nesting birds – including 10,000 migrating tundra swans every spring. If you want to make an overnight outing along the trail, camping is only permitted at the Horse Glad Trailhead on this stretch.

What Do You Need to Start Riding the OC and E Woods Line State Trail? 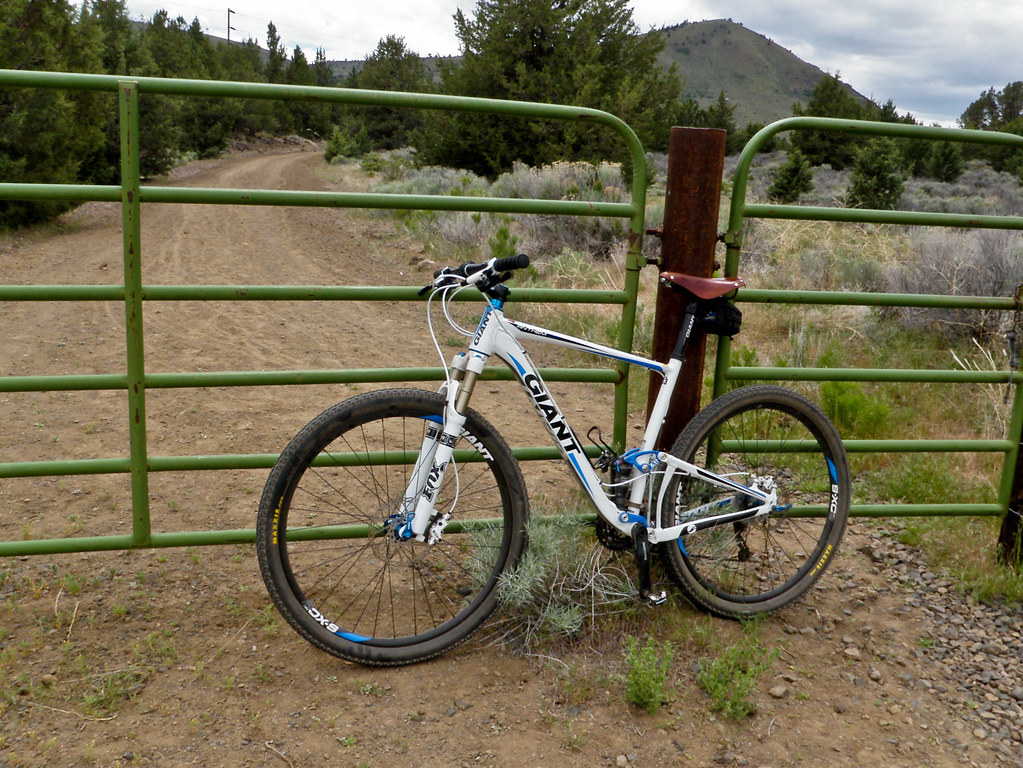 Cycling on the OC and E is what it’s all about—but there are some small things to know before you go. – By Michael McCullough

A little know-how and the right gear are almost all you need to get started on the trail. Here’s a quick rundown of what to know before heading out:

Trail etiquette: Cyclists should yield to equestrian users and remain on the trail at all times (especially since private property butts up against the trail at various points). And make sure to pack out whatever you pack in, be it food, water bottles, or even human waste. (Non-flush restrooms are available periodically along the trail; cyclists should consult with the official trail map from Oregon State Parks for specific locations.)

Trail map: Given its width – generally enough to fit a vehicle – the OC and E Woods Line State Trail is pretty easy to follow. But spurs and intersections with paved roads make it advisable to review and bring along a map. Oregon State Parks, which maintains the trail, offers a thorough PDF map that can be downloaded to your smartphone and saved for offline use. Discover Klamath’s Ride Klamath Ride website also hosts suggested itineraries and maps (which include suggestions for where to eat, drink, and stop along the way).

Gear: Sure, you’ll want plenty of sunblock, especially in summer, and sustenance to keep you going. (There is no drinking water along the trail.) But you won’t get far without a good bike. Zach’s Bikes, based in Klamath Falls, rents car racks, mountain bikes, and e-bikes, and the shop’s friendly staff members are usually happy to recommend certain sections of the trail tailored to your abilities and time constraints. Elsewhere in Klamath Falls, Wheel Fun Rentals at the Running Y Ranch Resort offers road bikes, kids bikes, and trailers for cyclists looking to enjoy the paved section of trail.