Part of the joy of outdoor recreation in Klamath County—one of the great places anywhere, mind you, for getting outside—is the spectrum of experiences. And along with plenty of highly accessible, developed recreation sites, Klamath’s got a surplus of deliciously remote backcountry rich in scenery, ecological and geological wonders, and a sense of solitude and adventure.

Here we’ll be profiling the four federally designated wilderness areas that fall wholly or partly within Klamath County on national-forest land. It’s worth noting by the way that the backcountry of Crater Lake National Park—more than 95 percent of the park—is managed as wilderness, and certainly serves up plenty of elbow room and quiet.

Mount Thielsen Wilderness: In the Shadow of the Lightning Rod of the Cascades 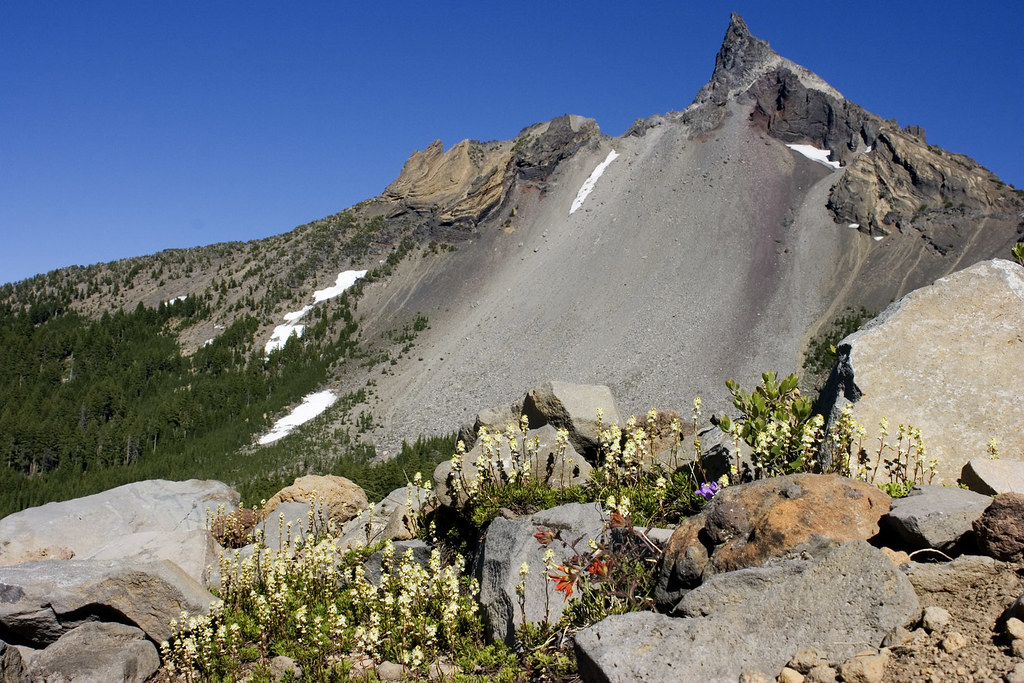 Up close and personal with the jagged summit of Mount Thielsen. – Patrick Alexander

The 9,182-foot tusk of Mount Thielsen ranks among the most distinctive peaks in the Lower 48—a fierce fang that draws enough electrical attention during summer thunderstorms to earn the nickname “The Lightning Rod of the Cascades.” This commanding, spiky horn represents the more resistant plumbing of a basaltic-andesite shield volcano dead for perhaps 250,000 to 300,000 years and chiseled away at by glaciers. (A scrawny remnant glacier on Thielsen’s north side, the Lathrop, was reported to have vanished in August 2020.)

Hoofing it (and scrambling) up the trail to just below the summit spire of Mount Thielsen is literally the crowning hike of the Wilderness. But, given there’s nearly 80 total miles of tread, it’s by no means the only trail worth checking out. A roughly 34-mile chunk of the Pacific Crest National Scenic Trail (the “PCT”) strikes through the Wilderness. And several west-side trails north of the Lightning Rod offer dazzling views: the Howlock Mountain Trail, which leads you to killer prospects of Mount Thielsen from Timothy Meadows and Thielsen Creek Camp, and the switchbacking climb through shaggy subalpine mountain-hemlock forest to the top of 8,031-foot Tipsoo Peak, where you can sweep those peepers of yours up and down the Cascade spine from the Three Sisters to Mount Shasta. 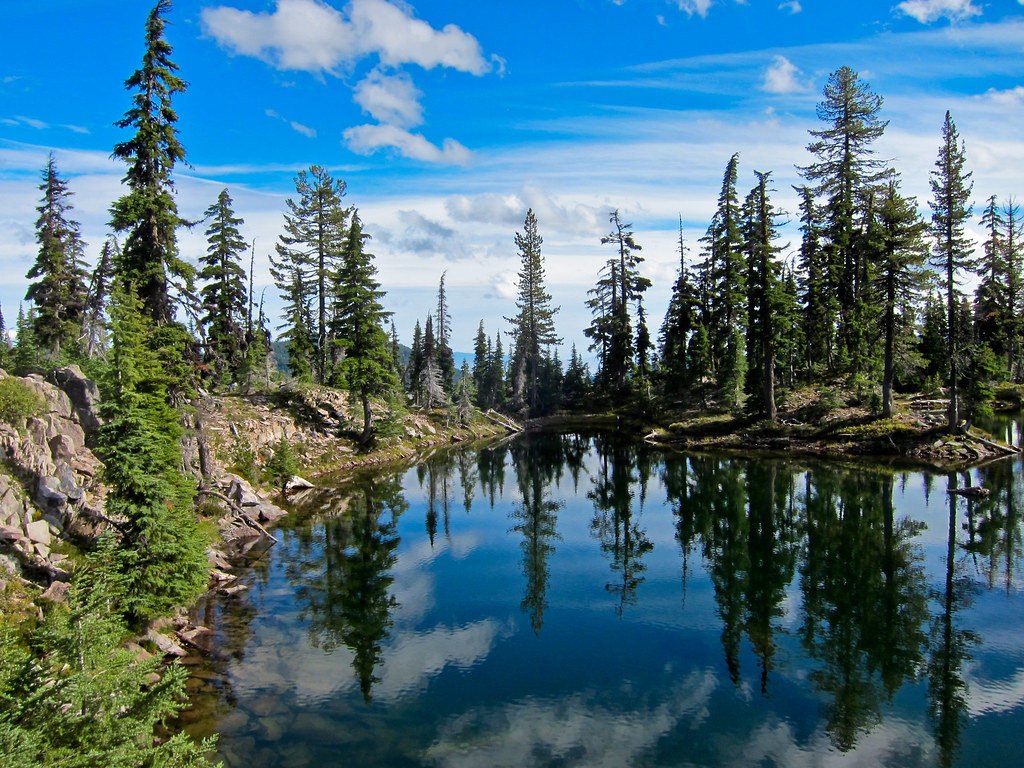 The biggest wilderness area in Klamath County, the Sky Lakes Wilderness covers nearly 114,000 acres along the rolling forested crest of the Cascade Range south of Crater Lake National Park. As the name suggests, high-country lakes are a defining feature of this wilderness, particularly those clustered in the glacially scoured Seven Lakes, Sky Lakes, and Blue Canyon basins, but also big Fourmile Lake at the south end. All told, more than 200 tarns, lakelets, and ponds shimmer up here.

But needless to say there are other attractions here, not least the pinnacle of Southern Oregon: 9,495-foot Mount McLoughlin, which stars in the backdrop of Fourmile Lake. It’s a slog of nearly 4,000 feet to get up to the tippy-top of McLoughlin, but the rocky and gravelly realm above timberline is exhilarating, and the summit sightlines epic, including along the Cascade Crest from the Three Sisters to Lassen Peak.

Among the other impressive topographic features here are Devils Peak, brooding over Cliff Lake, and the great ice-broadened canyon of the Middle Fork of the Rogue River, which heads in the Wilderness along with the Rogue’s South Fork.

Most of the trails in the Wilderness intersect at some point with the PCT, which threads the entire parcel south to north over about 35 miles. Loop your way through the celebrated lake basins, trace part of the 19th century military wagon road called the Rancheria on the Twin Ponds Trail, and walk a couple hundred feet north off Trail 982 to visit the “Waldo Tree” beside Island Lake—one of those cool, under-the-radar historical sites Oregon abounds with. The trunk of this old mountain hemlock was inscribed by Judge John B. Waldo’s party in 1888 as they tramped down the Cascade Crest on a journey that helped gather information for the establishment a few years later of the Cascade Forest Reserve, gigantic forerunner of the individual national forests cloaking the Oregon Cascades north to south. 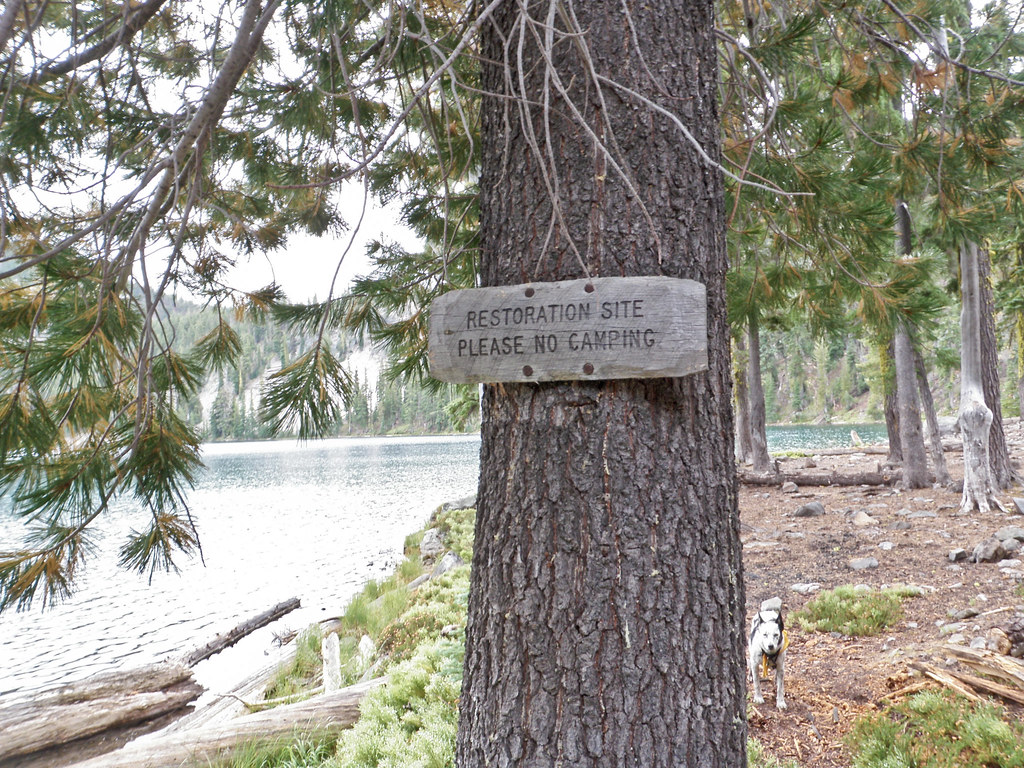 No other wilderness area in the country has the “floorplan” of Klamath County’s Mountain Lakes Wilderness: a perfect square, conforming to township boundaries. Its roughly 23,036-acre, rigidly defined shape is a long-protected roadless expanse, having been declared a Primitive Area back in 1930 and becoming a federal wilderness area in 1964 with the passage of the Wilderness Bill.

A previous theory that the craggy rims and lake-sprinkled basin floors of this wilderness represented the glacier-whittled caldera of a once-roughly-12,000-foot stratovolcano (a la Crater Lake, minus the single big caldera lake) has yielded to an alternate idea suggesting the terrain is composed of four or more overlapping, worn-down shield volcanoes.

Three trails climb into the wilderness: the 6.5-mile Mountain Lakes Trail from the west, the 4-mile Clover Creek Trail from the south, and the 4.5-mile Varney Creek Trail—the most heavily used—from the north. These all access the 8.2-mile Mountain Lakes Loop Trail, the hiking centerpiece of the wilderness, which edges a number of its many lovely, conifer-circled water bodies, including Eb and Zeb lakes and Lake Harriette, the biggest of the collection. Side paths lead to others such as Lake Waban and South Pass Lake, while cross-country hikers can take to the ridges to reach view-rich promontories, among them 8,208-foot Aspen Butte, high point of the Mountain Lakes Wilderness. 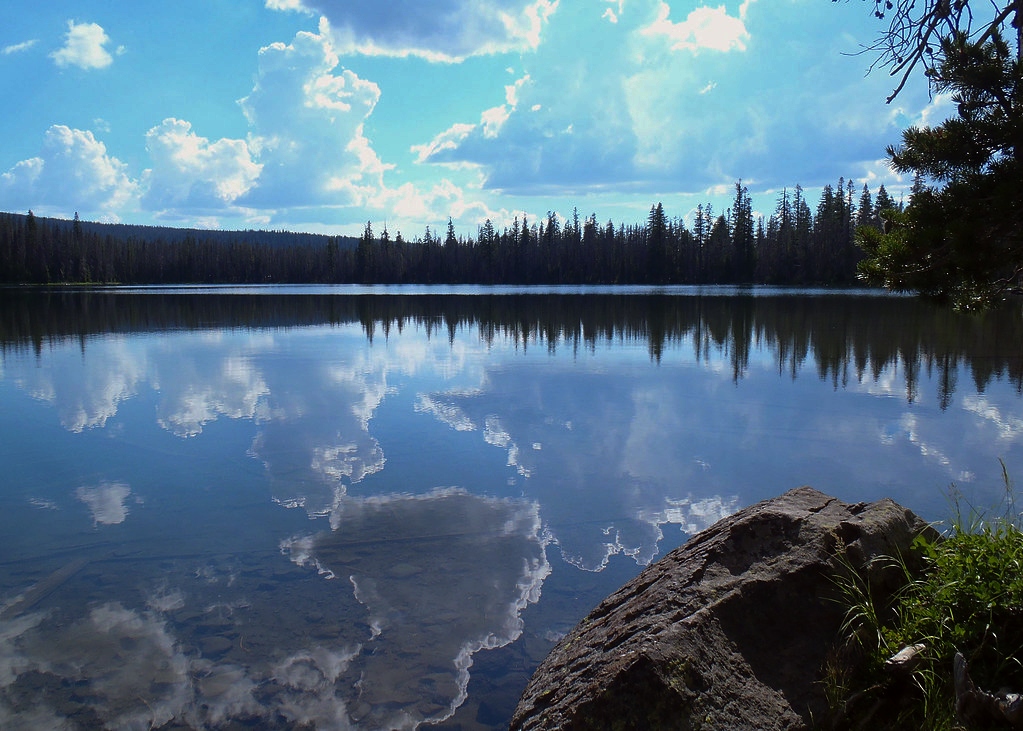 Most of the 22,587-acre Gearhart Mountain Wilderness lies in Lake County, but the western edge extends into Klamath County, and the summit of 8,364-foot Gearhart Mountain—a rugged old shield volcano—lies just east of the county line. This is a striking place, part of the broad transition zone where the broad piney highlands east of the Klamath Basin give way to the vast drylands of Oregon’s Basin-and-Range country. Solitude is rich here, and views are long.

One of the three main accesses to the Gearhart Mountain Wilderness is on the Klamath County side: the Deming Creek Trailhead and the Boulder Springs Trail heading up from it. This route accesses the main footpath across the Wilderness: the roughly 13-mile-long Gearhart Mountain Trail linking the North Fork Sprague and the Lookout Rock trailheads on the north and south ends, respectively.

The tree cover here includes shady white-fir depths, sunny ponderosa and lodgepole woodlands, murmuring aspen groves, and the scraggly whitebarks of the heights. Rock formations are a major highlight, including the hoodoos and stacks of the Palisades (which the Gearhart Mountain Trail passes through a little ways from its Lookout Rock terminus), the great buttress of the Dome, and the cliff bands and pinnacles of Gearhart Mountain’s summit crest, broken on the north side by the mighty gouge called the Notch.

Many hikers and backpackers beeline for Blue Lake or the Palisades, but those tackling the summit of Gearhart Mountain are treated to a thrilling panorama: eastward to the Southeast Oregon scarps of Crane Mountain and “the Steens,” southwestward to Lassen Peak and Mount Shasta, and westward and northwestward to landmarks of the Oregon Cascades, including Mount McLoughlin, the Crater Lake rim, Mount Thielsen, and even a glimpse of Mount Jefferson.

Hikers and backpackers headed for the Sky Lakes, Mountain Lakes, or Gearhart Mountain wilderness areas should be sure to arm themselves with the appropriate topographic maps and information on up-to-date trail and access-road conditions. Check in with the Fremont-Winema National Forest’s Klamath Ranger District (2819 Dahlia Street, Suite A, Klamath Falls; 541-885-3400) to prepare for your foray into Klamath County’s big, beautiful backcountry!