The Story of Crater Lake’s Old Man of the Lake

Perched like a round blue eye along the crest of the Cascade Range, Crater Lake is a superlative body of water—at close to 2,000 feet down, the deepest lake in the U.S., and one of the clearest in the world—known for its dramatic geologic history and its dazzling visuals. Pooled in the aftermath of Mount Mazama’s caldera-forming eruption some 7,700 years ago, Crater Lake is a must-see when visiting Klamath County.

Along with pyramidal Wizard Island, the waters of Crater Lake come broken by the enigmatic Phantom Ship, a rugged, skeletal remnant of an older cone. Despite its sailed appearance, the Phantom Ship’s a stationary feature of the flooded caldera. The true sailor of Crater Lake is a log. Not just any log: a vertically oriented one, downright famous, that’s been bobbing around this remote, spectacular volcanic bathtub for a mighty long time.

We’re speaking, of course, of the Old Man of the Lake, first recorded by U.S. Geological Survey geologist Joseph S. Diller back in 1896 and still cruising his way around today. 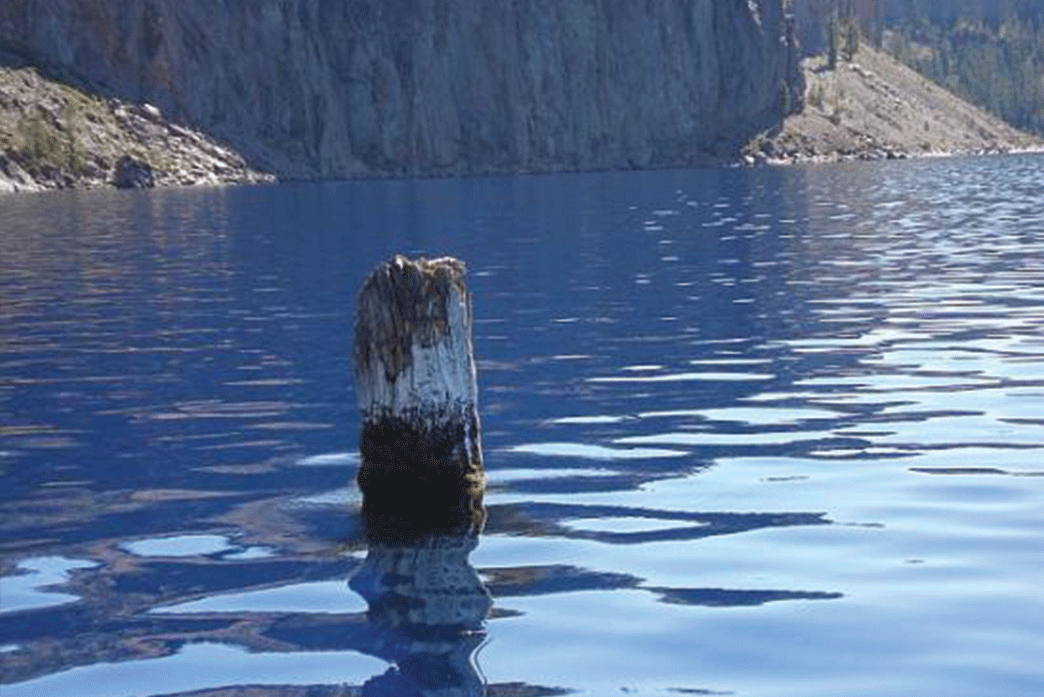 The Old Man of the Lake is a pillar some 30 feet long, about four feet of which protrudes above the surface; thanks to the pristine clarity of Crater Lake, the mossed-over rest of him can be clearly seen pointing down to the head-spinning depths.

The bobbing drift-log is—or, anyway, once was—a mountain hemlock, a distinctive Northwestern conifer that holds court over vast swaths of the Cascade high country. Many a montane lake and snowpeak glamor shot comes framed by the dark, gracefully swept silhouettes of these trees, which range from the subalpine forest up into timberline parklands and krummholz elfinwood. In life, the mountain hemlock combines elegant beauty—its feathery boughs and drooping top give it a soft-edged look—and gnarly toughness: This tree withstands some of the deepest snowpacks anywhere, and may spend good stretches of a typical Cascadian winter swaddled in the white stuff as a “tree ghost.”

Mountain hemlocks mingle with whitebark pines along the Crater Lake rim. At some point, it’s thought, a landslide must have transported the Old Man down the walls of the caldera and into the lake in its vertical position. Presumably, the theory goes, the dislodged hemlock was stabilized by rocks jammed within its roots; eventually, with some decay of the root wood, those stones dropped away, but by that time the submerged part of the trunk had waterlogged. (At this point, the Old Man doesn’t have root remnants any longer.) The sodden, underwater wood and the dried-out, sun-bleached exposed upper trunk balanced out, maintaining the Old Man’s unique upright posture and time-tested buoyancy.

Carbon dating suggests the Old Man of the Lake is 450 or more years old, but that doesn’t explain just when he went the aquatic route. But as author Mike Dash notes on his history blog, Diller had visited Crater Lake a number of times before noting the drift-log in 1896; a decade before, taking extensive soundings all over the lake to gauge its depth, he hadn’t observed—or, anyhow, didn’t record or remember recording—the object. So it’s possible the hemlock surfed down into Crater Lake sometime between 1886 and 1896, though that can’t be confirmed.

What can be said for pretty well certain—given the regularity of observations of a single, upright log in Crater Lake since Diller’s mention of it—is that the Old Man has been cruising around at least since 1896: quite the remarkable tenure, to say the least. 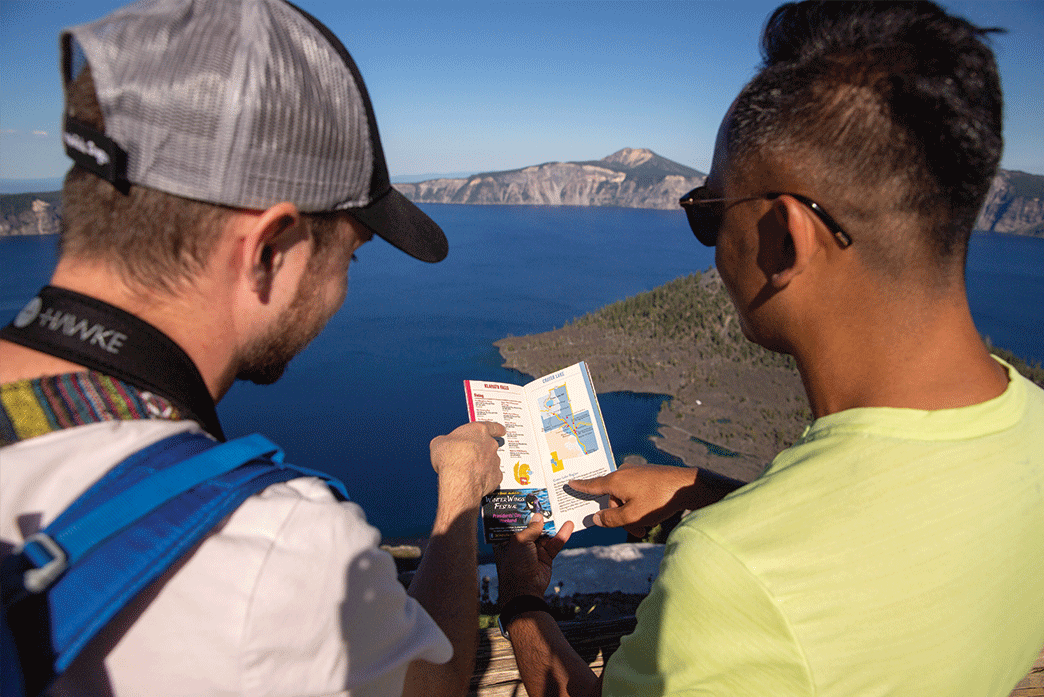 Legend has it that the Old Man of the Lake controls the weather in the caldera. – Discover Klamath

Wind and waves ferry the Old Man of the Lake around his domain, almost like he’s on relentless (but often lazy) patrol. In 1938, a little study—“Wind Currents in Crater Lake As Revealed by the Old Man of the Lake”—was published in the Crater Lake National Park Nature Notes. The report summarized observations of the drift-log’s movements throughout July, August, and September of that year, and showed that they added up to some impressive mileage: more than 62 miles, to be exact, mostly (in response to prevailing southerly breezes) in the northern section of the lake.

You can’t have a hulking, vertical log with a strikingly weathered, bone-white top rafting around for decades and decades in one of the most beautiful bodies of water in the world without it accruing a bit of folklore. Legend has it that the Old Man of the Lake controls the weather in the caldera.

The most famous “evidence” of this power comes from 1988 when scientists were investigating Crater Lake’s geothermal activity via a little submarine. Deeming the free-range log a navigational hazard, they tethered him close to Wizard Island. Within short order a nasty storm broke out, a tempest that promptly quieted when the Old Man was released (or, depending on the story, broke free).

Paying Your Respects to the Old Man of the Lake 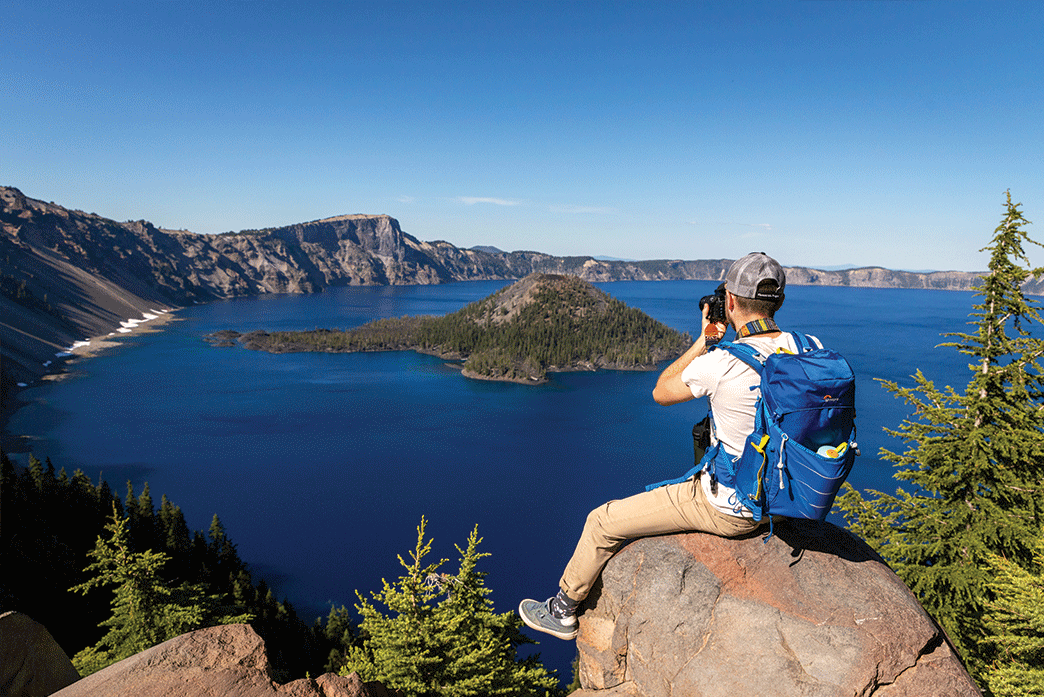 You can probably spot the Old Man from land, but you can get closer with a boat tour. – Discover Klamath

With a good pair of binoculars or a spotting scope, you may be able to track down the Old Man of the Lake from the Crater Lake rim. But a much closer look is often available: The boat tours offered in Crater Lake National Park will frequently swing by the drift-log, though the days of rangers and tourists jumping onto the top of the Old Man are (thankfully) past.

The Old Man of the Lake is a Klamath County celebrity of sorts, and you haven’t fully experienced the magic of Crater Lake till you’ve clapped eyes on his weathered head.