Are There Waterfalls in Klamath Falls?

Are There Waterfalls in Klamath Falls?

Just sixty miles south of Crater Lake National Park and seventy miles north of Mt. Shasta, located in the south central region of Oregon and bordering northern California nestled along the eastern slopes of the Cascade Mountains sits Klamath Falls. This high desert location offers the city over 300 days of sunshine per year. Maybe it’s the nickname “Oregon’s City of Sunshine” or its proximity to Crater Lake that makes this place so appealing. Then again, there’s a lot to do in and around Klamath Falls — like scenic hiking and world class mountain biking, golfing at an Arnold Palmer famous course, freshwater fishing, the oldest birding festival in the west, many other year-round outdoor activities, arts and culture and so much more.

Given the town’s name, it’s not unusual to think that there must be some jaw dropping, spectacular waterfalls in Klamath Falls. And upon a quick Google Image search looking for waterfalls near Klamath Falls, Oregon, you might come to the conclusion that Oregon’s highest waterfall is in Klamath Falls, but sadly that is not the case. In fact Multnomah Falls (Oregon’s tallest waterfall at 620’) is about a five hour drive north of Klamath Falls. So, is there a waterfall in Klamath Falls? Yes, however the actual waterfalls in Klamath Falls are not really ‘Klamath’ falls, they are Link River Falls and they can be found along the 1.5 mile Link River Nature Trail. These particular falls are not as clearly seen as one might think. While the “falls” are definitely worth seeing, they are not high set falls towering to the ground. These are a series of low falls and rapids on the Link River. A short and easy walk down the Link River Nature Trail will lead you to the falls. The trail is a mostly flat trail that runs between Putnam’s Point on Klamath Lake to the Klamath Wingwatcher’s Trail on Lake Ewauna. If you love watching birds, you’ll want to walk this path, as its unique habitat offers birds and wildlife peaceful sanctuary. Expect to take a couple of hours to truly enjoy the area. (Restrooms are available at Moore Park and Veterans Park. No facilities are along the trail.)

History of the Klamath Falls Name 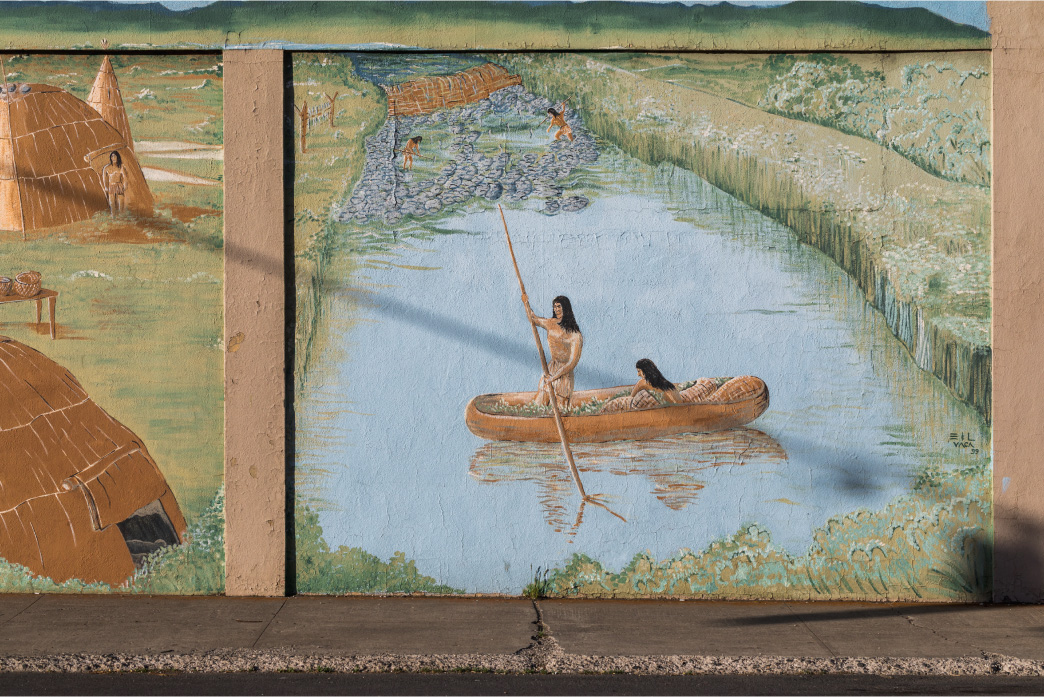 With such small waterfalls, or rapids, why name the town Klamath Falls? Well, Klamath Falls history is a bit complex. Klamath Falls is a city and the county seat of Klamath County, Oregon. It lies at the southern end of Upper Klamath Lake, approximately 25 miles from the California border. After migrating west on the Oregon Trail settlers began exploring a southern alternative known as the Applegate trail which began the settlement of the Klamath Basin. What is now known as Klamath Falls originally began as the town of Linkville. In 1867 George Nurse formed the town of Linkville at the mouth of the Link River, which gets it’s name quite literally from “linking” Upper Klamath Lake to Lake Ewauna. It wasn’t until about twenty-five years later in 1893 that the name was changed from Linkville to Klamath Falls. 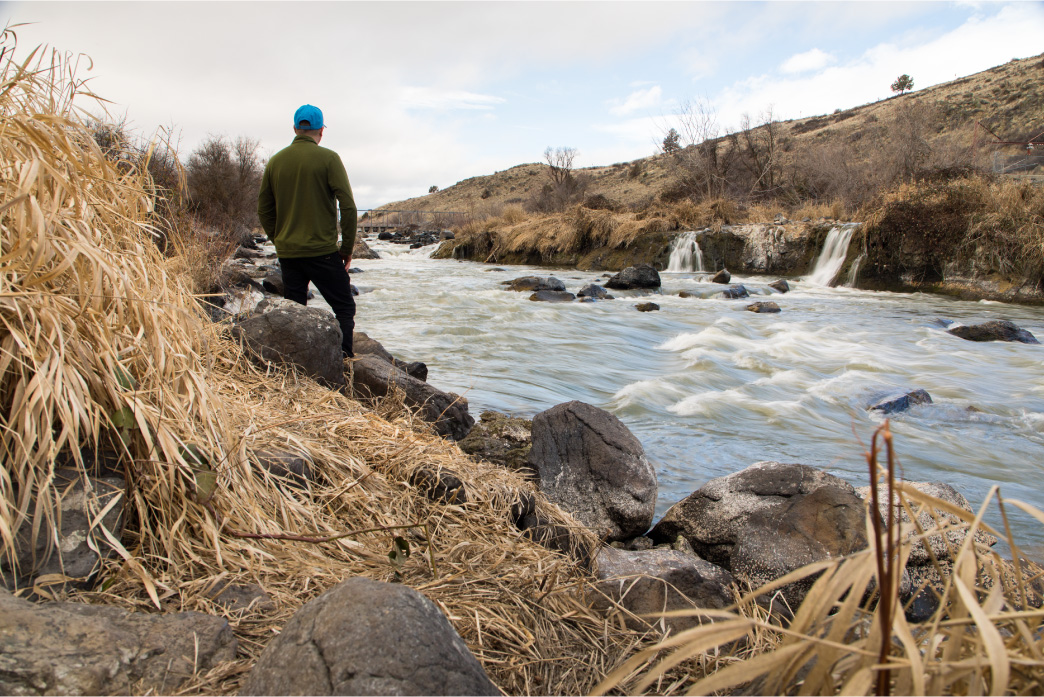 The Link River Falls are seen from the banks of the Link River during early spring, just before the bright green colors come alive.

The name, Klamath Falls, comes from a rich history. Before European-Americans began moving into the area, Native Americans from the Klamath and Modoc tribes gathered to fish on the Link River, known to them in the Klamath language as ‘Tiwishkeni’ which translates to “where the falling waters rush” which eventually led to the “falls” portion of the city’s name. It is believed that the name of the town was changed from Linkville to Klamath Falls in an effort to publicize the availability of water power for industry in the days before electricity was widely available. The falls were never spectacular from a scenic perspective, but for many years the river provided essential power for the town’s first flour mill and lumber mill. Logging was Klamath Falls’ first major industry. After the completion of the Klamath Irrigation Project in 1906 and the arrival of the Southern Pacific railroad in 1909 growth was stimulated and Klamath became known as a lumbering center and shipping and processing point for livestock, potatoes, and grain. In the 1920’s Klamath Falls was even the fastest growing city in Oregon until the Great Depression of 1929 brought the lumber boom to an end.

Eventually the flour mill and lumber operations moved to new locations, and the need for the river’s water power diminished. Over time local residents began to forget where the falls were. Some mistakenly believed the falls were covered up by a dam constructed on the river in 1920. In reality, the falls (and rapids) for which Klamath Falls was named are still there for those willing to hike to see them. 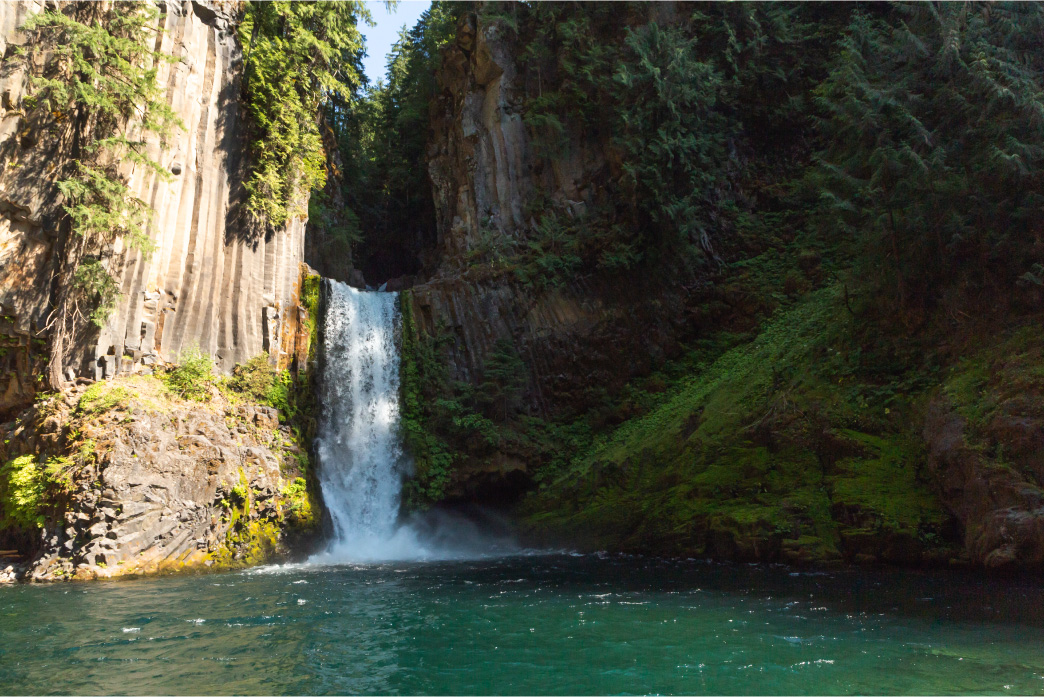 Klamath Falls is the gateway to Crater Lake, and while there are a couple of waterfalls within Crater Lake National Park, there are also many other waterfalls near Klamath Falls.  While you visit this beautiful town and surrounding areas, be sure to take advantage of the many opportunities of things to do near Klamath Falls before moving on. Klamath Falls is the perfect location to explore Southern Oregon – plus, you cross the 25 mile-away border and you can venture into Northern California. To help you make the most of your trip, we’ve included a list of the best waterfalls in the surrounding area to visit.

The top waterfalls to visit in the area include:

While these are our top picks, there are even more waterfalls to visit near Klamath Falls Waterfalls are just one of the many things to do while visiting the City of Sunshine.

0 Comments on "Are There Waterfalls in Klamath Falls?"