At more than 6,100 square miles, Klamath County is the fourth-biggest county in Oregon. It also lies astride a great geological and bioregional crossroads, stretching from the crest of the Cascade Range to the margins of the Great Basin, from lush and towering conifer forests to juniper and sagebrush country and some of the greatest lakes and wetlands of the Intermountain West.

That all makes for some epic scenery and ecological diversity, yours to sample on the following hikes!

On either the multi-use Brown Mountain Trail or the hiker-only Pacific Crest Trail (via the Summit Sno-Park), you can wander amid a lava-rock wonderland on the flanks of Brown Mountain, a 7,311-foot basaltic-andesite shield volcano west of Lake of the Woods.

Pass from deep old-growth conifer shade into the blocky rubble of the lava flows, which serve up multiple looks at the nearby crown of Mount McLoughlin. Walking the cinder paths through the rugged flows, keep your ears perked for the surprisingly loud warning squeals of pikas: hamster-like, rock-hopping relatives of rabbits that prosper in this kind of talus. (They’re a whole lot easier to hear than see, but rest assured they’ve got their eyes on you as you pass through their rocklands!) 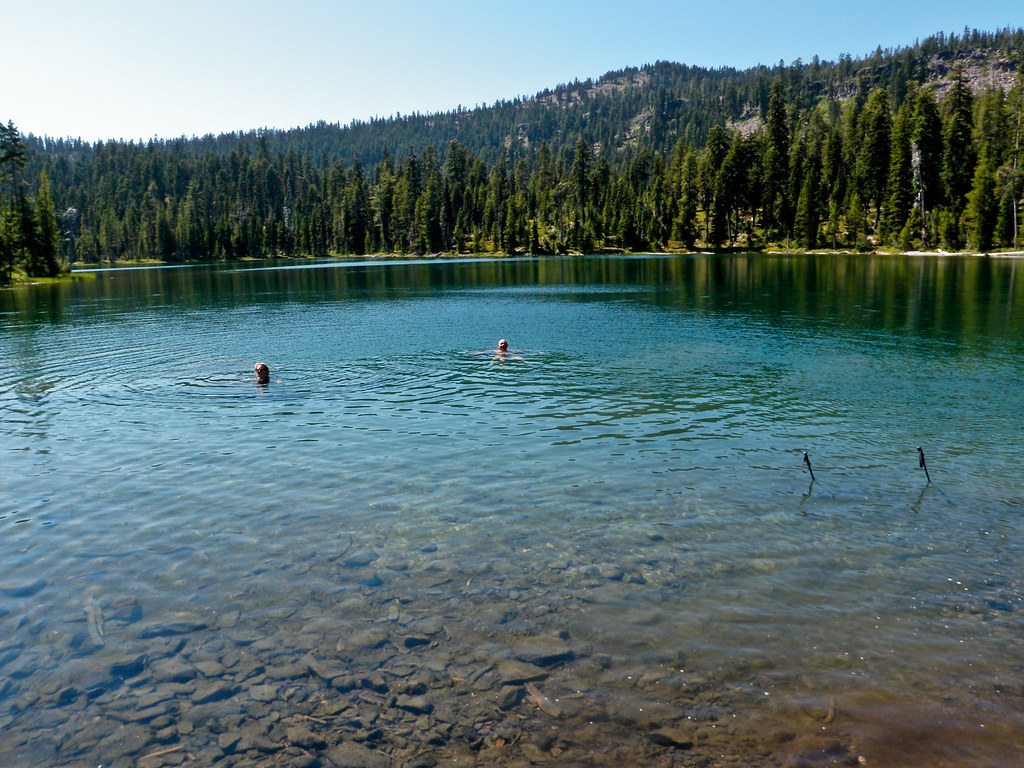 Taking a dip in Trapper Lake, one of the more than 200 lakes in the Sky Lakes Wilderness. – Michael McCullough

More than 200 lakes and ponds pepper the Cascade Crest highland of the Sky Lakes Wilderness, concentrated in multiple enchanting basins. Most celebrated of all is the Seven Lakes Basin, which you can explore on a 14-mile loop hike showing off forest-cupped lakeshores and the knockout panorama from the summit of 7,582-foot Devils Peak overlooking the clustered tarns.

Shaggy, lichen-strung mountain hemlocks, stiffer-boughed Shasta red fir, and dense understory huckleberry thickets—which serve up quite the bounty in late summer—introduce you to the subalpine “snow forest” that dominates so much acreage in Oregon’s Southern Cascades.

The longest linear park in the Beaver State, the 109-mile-long OC&E Woods Line State Trail runs between Klamath Falls and Bly, with a northerly spur up to the Sycan Marsh on the Klamath-Lake county line. This rail-to-trail parkway traces the route of the Oregon, California, and Eastern Railroad, which hauled logs from 1917 to 1990. Multiple trailheads provide ready-access to its different sections, including Crosby, Switchbacks, and Sycan Siding.

Exploring the different sections provides an awesome overview of the Klamath Basin’s lowland scenery and long sightlines to signal peaks: from close-by heights such as the Swan Lake Rim and the Buttes of the Gods to the distant snowhead of Mount Shasta.

You’ll pass through ponderosa woodlands and juniper-sagebrush savanna, and—at the northern end—gaze into the vastness of the great Sycan Marsh, drained by the Sycan River. Besides that 30,000-acre wetland, natural highlights include the fertile valley of the Sprague River and the striking volcanic outcrops of the Devils Garden, an easy cross-country trek off the trail. 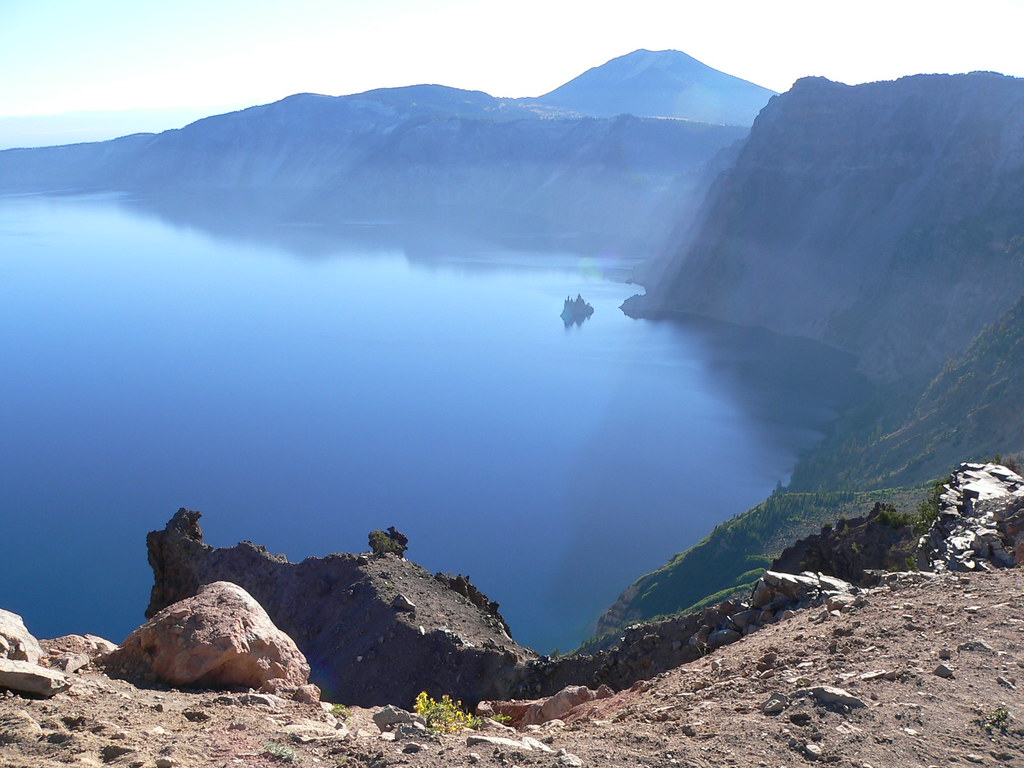 The majestic views of Crater Lake as seen from Garfield Peak. – Lee Coursey

Few vantages anywhere in the world can compare with the top-down look at Crater Lake from Garfield Peak, an 8,054-foot promontory along the jagged caldera rim of Mount Mazama. The 1.7-mile trek up from Crater Lake Lodge rewards with spectacular views of the Wizard Island cone and the skeletal islet of Phantom Ship poking above those fiercely blue waters. There are also other rim landmarks such as Dutton Cliff and Llao Rock and farther-afield peaks such as the “lightning rod” of Mount Thielsen to the north and gargantuan Mount Shasta to the south.

The long-distance sightlines are the main attraction, but the Garfield Peak Trail also introduces you to the Crater Lake rim’s hardy native conifers, including mountain hemlocks, subalpine fir, and the tenacious, long-lived whitebark pine.

The expanded, multi-use Spence Mountain trail network invites hikers (and mountain bikers) to devise their own loops and circuits on high, piney ground overlooking Upper Klamath Lake. From Spence Mountain itself or the peninsula tip of Eagle Point in Eagle Ridge County Park, you’ll get to marvel not only at views of this largest natural lake by area in Oregon—including Shoalwater Bay edged by the Eagle Ridge peninsula—but also the broad-shouldered shield volcano of Pelican Butte rising to the west and the king peak of Mount McLoughlin, beyond.

This is a great hiking destination for getting an overview of the Upper Klamath Basin’s layout within easy reach of Klamath Falls. 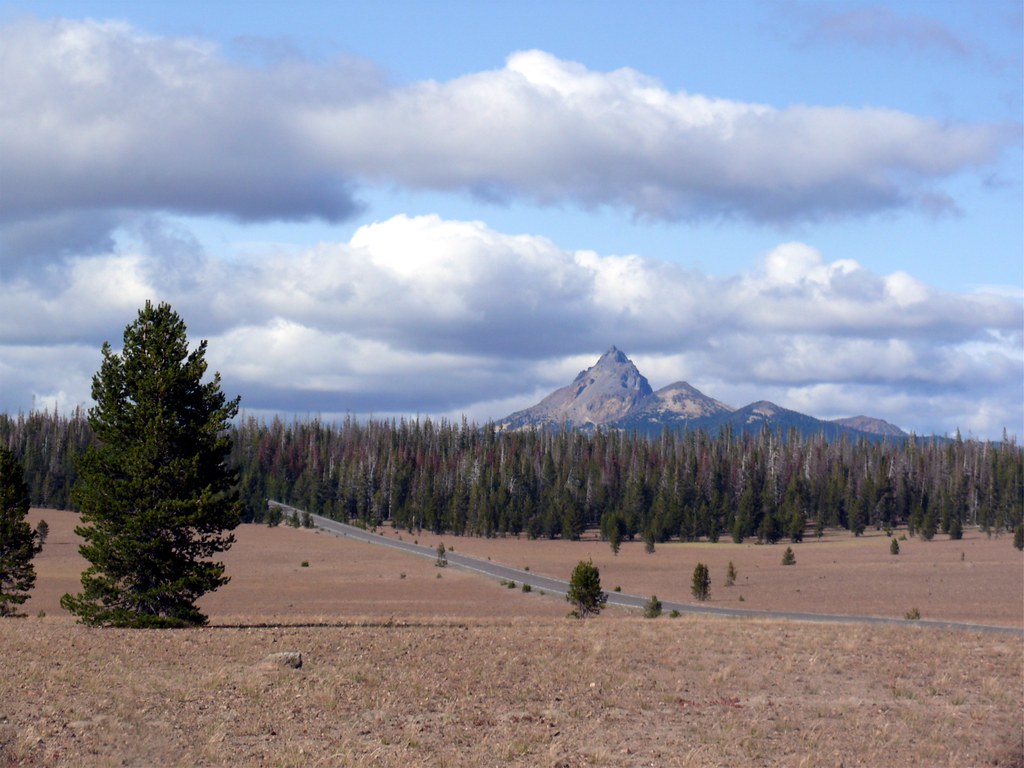 Take a day hike on the Pacific Crest Trail in Crater Lake National Park north of the world-famous body of water to the Pumice Desert—one of the park’s more evocative natural landscapes.

Here, the high woods of lodgepole pine open up to reveal a broad, rather scraggly meadow: not everybody’s definition of wow-worthy scenery, but a fascinating geological and ecological site. Once a glacial valley, the Pumice Desert was drowned in pumice and scoria flows from Mount Mazama, creating a porous volcanic underlayment about 200 feet deep.

The Pumice Desert—a Research Natural Area established to monitor vegetation succession—is slowly being invaded by lodgepoles, though it will remain a strange island of openness in the Cascade Crest forests for some time. Enjoy the view of toothy Mount Thielsen while you’re here, and marvel at the fact that, back in the late 1800s, this high meadow, surrounded by timber, regularly hosted herds of pronghorn.

Whichever hiking adventure you choose for your Klamath County visit, you won’t ever forget it!

Written by Ethan Shaw for Matcha in partnership with Klamath Visitor and Convention Bureau.