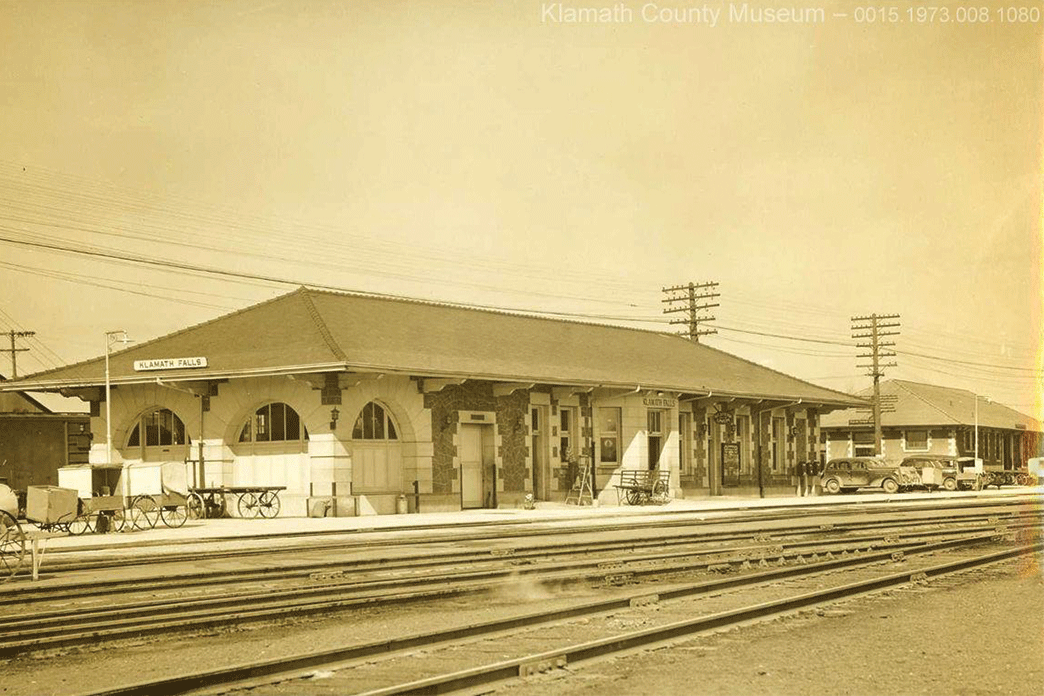 There are many ways to get to Klamath Falls, Oregon. In fact, there are three major highways that meet in Klamath, plus a regional airport. One of the lesser-known ways to travel to Southern Oregon is to take Amtrak to the Klamath Falls train station. The Klamath Falls Amtrak station is the southernmost station in Oregon. The actual station is located at 1600 Oak Avenue sitting at the southern end of Upper Klamath Lake. This train station, also known as the Klamath Falls depot, is a historic downtown landmark originally built in 1910 for the Southern Pacific Railroad, a massive train system that eventually became so large it stretched from Portland, Oregon to New Orleans, Louisiana! Over time this stretch of rail blossomed into the most far-reaching of all the classic American railroads. Poor management in the decades following World War II greatly weakened this proud carrier. Today, given Southern Pacific’s impressive size and scope, most of its principal lines remain in regular service, including the one used for Amtrak’s Coast Starlight route. 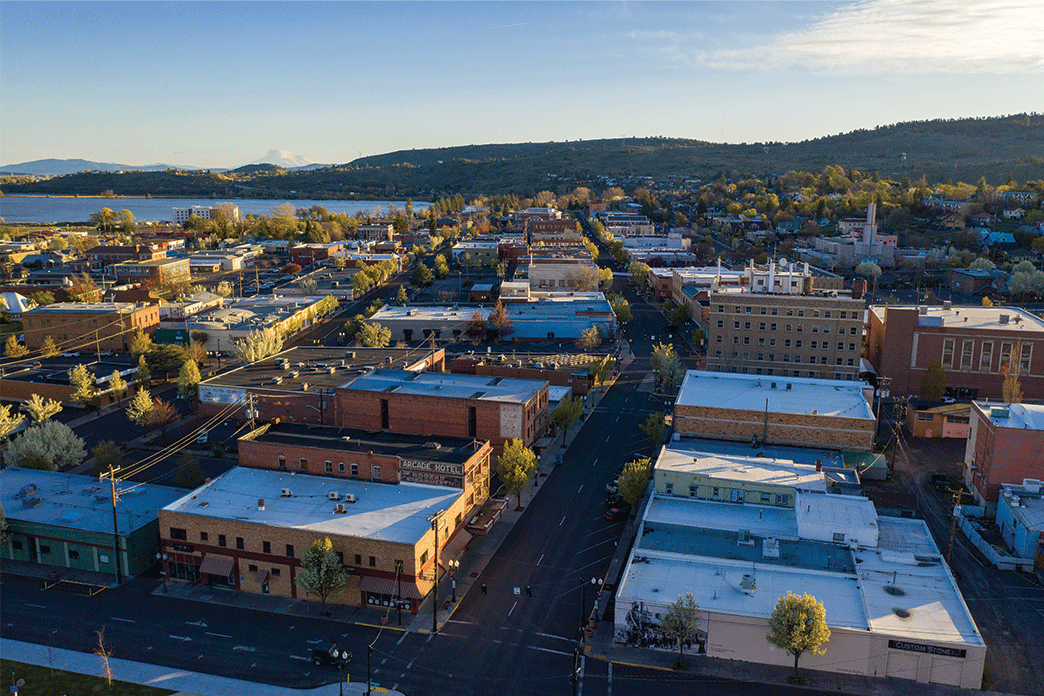 Downtown Klamath Falls with charming historic buildings with Lake Ewauna and Mount Shasta in the background.

The Amtrak Coast Starlight route is a grand west coast train adventure, en route daily between Los Angeles and Seattle. Widely regarded as one of the most spectacular of all train routes, the Coast Starlight links the greatest cities on the West Coast. The scenery along the Coast Starlight route is unsurpassed. The dramatic snow-covered peaks of the Cascade Range and Mount Shasta, lush forests, fertile valleys and long stretches of the Pacific Ocean shoreline provide a stunning backdrop for your train getaway. 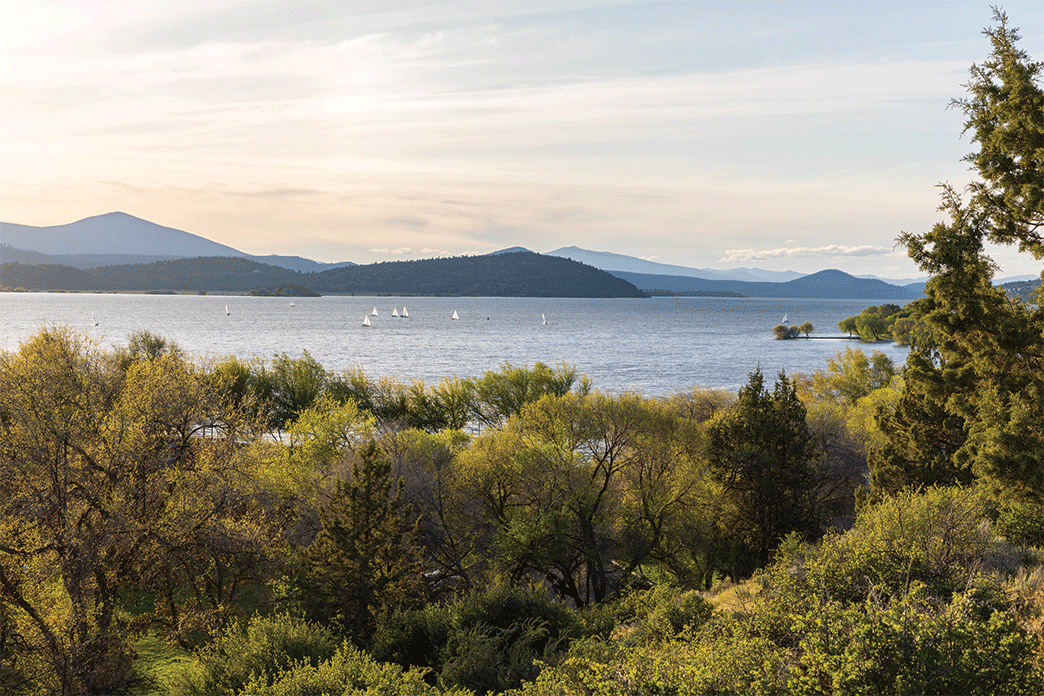 View of Upper Klamath Lake with sailboats as you travel the Coast Starlight in Klamath Falls.

Train travel is fun and rewarding. Free Wi-Fi is available on most trains as well as spacious, comfortable seats for you to spread out, sleep, eat and feel refreshed by the time you reach your destination. Amtrak even allows you to bring your bike with you! Those looking to book national park vacations should look no further than the Coast Starlight route. This route allows you to travel by train to Klamath Falls and from there you can drive to visit Crater Lake National Park, Lava Beds National Monument, Lassen Volcanic National Park, Redwood National Park, Oregon Caves National Monument and more along the Circle of Discovery tour using Klamath Falls as your basecamp. For your next Amtrak vacations visit our trip ideas page. 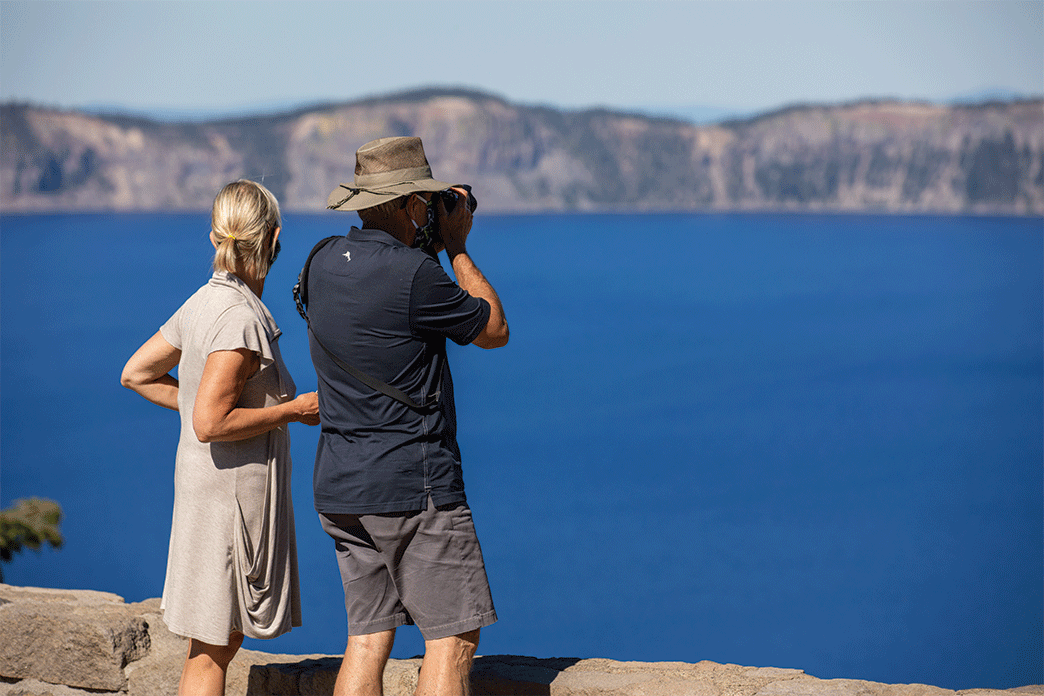 Train travel is an utterly unique experience and more than convenient from Klamath Falls. Getting around by train from Klamath Falls can give spectacular nearby landmark views including Upper Klamath Lake, Williamson River, Crescent and Odell lakes, and lush pine forests through Klamath country. Traveling by train then renting a car is a fantastic way to explore Klamath County. Car rentals in Klamath Falls will make that easy and affordable for you. This way, you can spend as much time anywhere you go and not be tied down to a schedule of catching a ride. All of the car rental locations in Klamath Falls are committed to helping you make the most of your vacation in Klamath and the surrounding area. In summer months (July 1st through Labor Day) you can purchase a package through Amtrak which includes a trip from Klamath Falls to Crater Lake National Park. The Crater Lake Trolley will pick you up at the Amtrak Station in downtown Klamath Falls and take you on a trip to Crater Lake for a fun day of learning and discovery before bringing you back to Klamath Falls. The Crater Lake Trolley has been running yearly in the summer months for nearly two decades. This service is operated out of Klamath Falls, OR via The Shuttle at the Amtrak station. The Crater Lake Trolley currently has three historically designed and engineered trolleys that operate daily at Crater Lake. The tour itself lasts about 2 hours as it travels around the Rim of Crater Lake, with stops in specific locations and points of interest. These stops, along with your ride are all perfect for snapping photos of the local landscape.

From Amtrak Klamath Falls you can explore Klamath’s charming and historic downtown, the falls for which the town was named, Crater Lake National Park, Lava Beds National Monument and an abundance of outdoor recreation adventures including mountain biking, ziplining, birding, fishing and more. So if you’re looking to plan a fun weekend getaway, train travel on Amtrak’s Coast Starlight route may be right for you! Taking the train from the Klamath Falls train depot can lead to a quick weekend getaway or a much longer journey to see some of the most breathtaking areas in the west.