Crater Lake Afterparty: An Adventure for Every Personality

Maybe you’re taking down the tent at Mazama Campground at Crater Lake National Park, a fire still smoldering from breakfast and dirt still lodged under your fingernails. Or perhaps you’re looking out over the deepest lake in North America from Crater Lake Lodge, rested and relaxed after a weekend exploring the park.

Either way, we’d totally understand if you’re not quite ready to leave Klamath County. After all, beyond Crater Lake’s park boundaries sits one of the best birdwatching outposts in the United States, the longest linear park in Oregon, a hidden mountain resort on the banks of another clear lake in the southern Cascades, and opportunities to paddle through the region’s natural beauty.

So if you’re wanting to extend your stay after a visit to Crater Lake, here’s how to enjoy the rest of your vacation in Klamath County—no matter what kind of traveler you may be.

Wildlife abounds at Crater Lake, from the furry pika (whose distinctive squeak recalls a dog’s chew toy) to the reclusive black bear. But if you’re still curious about regional wildlife, consider a trip south to the Upper Klamath National Wildlife Refuge.

The refuge, a noted stopover site for migratory birds, is home to more than 15,000 acres of freshwater marsh and open water—the ideal habitat for hundreds of species of bird, including the American white pelican, several species of heron, bald eagles, and osprey. Migrations in late summer and fall routinely bring more than 1 million birds to the refuge, overwhelming birders in the best possible way, but birds remain present year-round at the refuge. The best way to explore the refuge is via the Upper Klamath Canoe Trail. For canoe rentals, check out Rocky Point Resort or Real Oregon Experience. 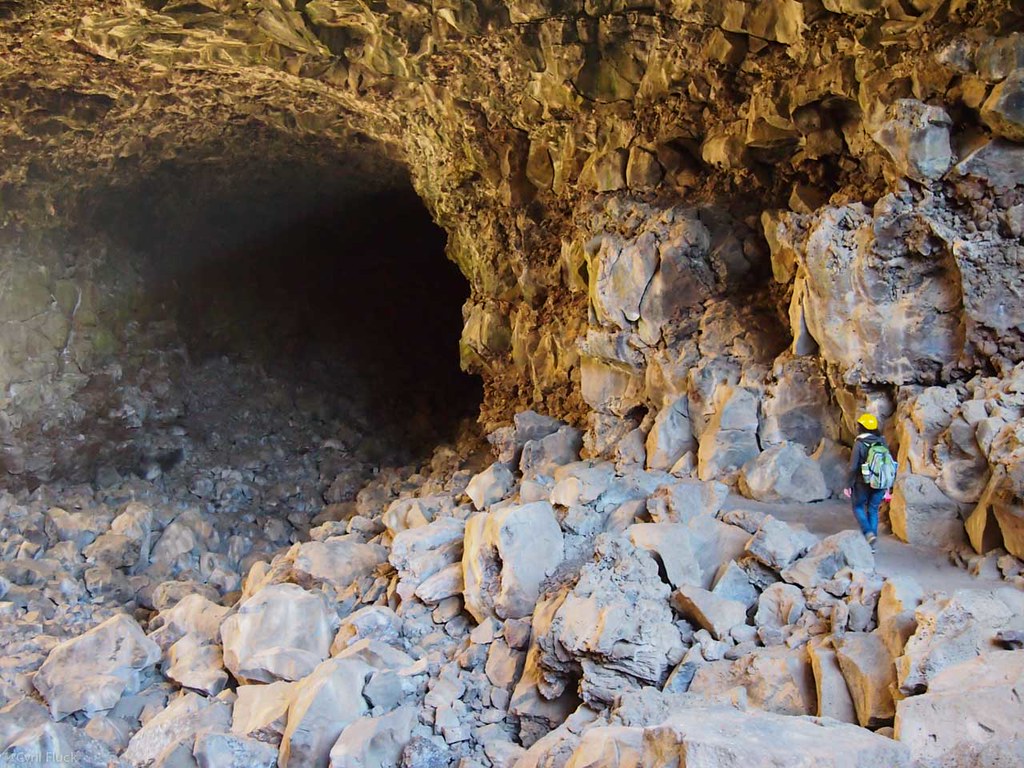 There’s a good chance you spent your weekend soaking in views from at least one of Crater Lake’s most famous peaks—whether spying the southern Cascades from atop Garfield Peak or marveling at the lake from Mount Scott, the highest point in Crater Lake National Park.

If you’re up for a little more adventure, consider swapping the expansive views for something a bit more intimate—and head underground at Lava Beds National Monument.

A half-million years of volcanic activity have created a pockmarked landscape at Lava Beds—where more than 800 caves enchant visitors today.

The underground attractions steal the show at Lava Beds, where several caves can be explored along the two-mile Cave Loop road. Mushpot Cave is a good place to start; the spacious cave is the only lighted cave in the monument and is dotted with interpretive exhibits explaining the area’s natural history. Numerous other caves can be explored, however, with experiences that range from beginner-friendly treks to more advanced outings (which require crawling through tight spaces).

Other sites at the monument include Native American rock art sites, above-ground hiking trails, a quiet campground, and more.

Crater Lake is home to many miles of hiking trails—but even that can’t quite compare to the OC and E Woods Line State Trail.

The park is a rail-to-trail conversion built on the railbed of the Oregon, California, and Eastern Railroad that once shuttled cattle and lumber throughout the region. Today, the path—officially, Oregon’s longest linear park—packs a lot of natural beauty into its 109 miles.

A paved path, popular with joggers, walkers, and bicyclists, departs from Klamath Falls before turning to gravel outside of town. As it heads northeast, the trail showcases views of Mount Shasta, expanses of juniper and sagebrush, and the quiet Sprague River (teeming with waterfowl all year long)—all before crossing the 400-foot-long Merritt Creek train trestle.

Several access points along the way make it easy to hop on and off the trail, find the right length for your outing, and see as much of that natural beauty as possible.

Wherever you wind up on the trail, make sure you have the proper gear. Zach’s Bikes, for instance, rents car racks, mountain bikes, and e-bikes to help make the most of your cycling experience. Nearby, The Ledge is an outdoor gear store that sells everything you need for a fun time on the trail—including apparel, backpacks, trekking poles, and water bottles; friendly associates are even happy to provide recommendations if you’re stumped for where to go.

For the Traveler in Search of Cozy Comfort: Lake of the Woods Resort 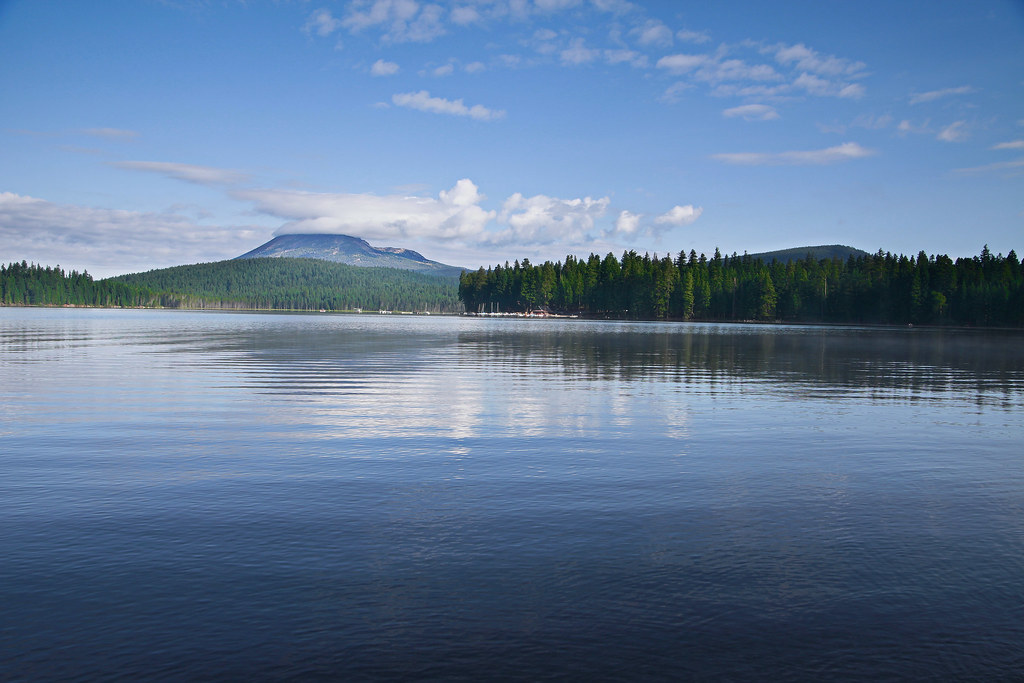 The placid waters of Lake of the Woods. – ktkochan

The resort, a popular summertime getaway, boasts nearly three dozen cabins for rent—each decorated with its own touch of rustic charm and outfitted with luxurious amenities that include down comforters, Pendleton blankets, fire pits, screened-in porches, kitchens or kitchenettes, jetted tubs, and more.

Away from the cabin, the resort hosts a remodeled marina, hiking trails, all manner of on-the-water recreation (from water skiing to paddling), and a restaurant that serves burgers, sandwiches, and filling entrees (such as meatloaf and grilled Oregon steelhead).

You can’t steer your own craft on Crater Lake, so head to nearby Klamath Marsh National Wildlife Refuge to scratch that particular paddling itch.

Just east of Crater Lake, the refuge provides marshland habitat for a variety of waterfowl, as well as meadows that draw shorebirds, raptors, and other species of bird.

In all, roughly 700 acres of open water enchant paddlers July-September, offering the chance to get close to great blue herons, sandhill cranes, mallards, ruddy ducks, and other species—and to see land-based animals, such as mule deer, muskrats, and Rocky Mountain elk. Cascade peaks dominate the horizon to the west.

Fair warning: Rentals are not available at, or near, the refuge—so you’ll want to bring your own equipment before hitting the water. The canoe trail occasionally closes due to fluctuating water levels and to protect wildlife, so call refuge headquarters for the latest information.

With a summer that might not begin until mid-July—and an autumn that can arrive as soon as Labor Day—camping in the southern Cascades is a joyous experience that may only be available for a few short months in a given year.

So if you’re looking for another night under the stars, angle for a site at Jackson F. Kimball State Recreation Site, which sits just southeast of Crater Lake.

The quiet campground hosts 12 primitive sites (without water) and two primitive horse campsites—all available on a first-come, first-served basis—mere steps from the headwaters of the crystal-clear Wood River. From the park, campers can paddle and fish from the slow-moving Wood River, walk amongst a forest of lodgepole pine, and spy wildlife (such as migratory birds).

And if you’re looking to get on the water but left your paddlecraft at home, Sky Lakes Wilderness Adventures rents single kayaks, tandem kayaks, stand-up paddleboards, and canoes in nearby Chiloquin. 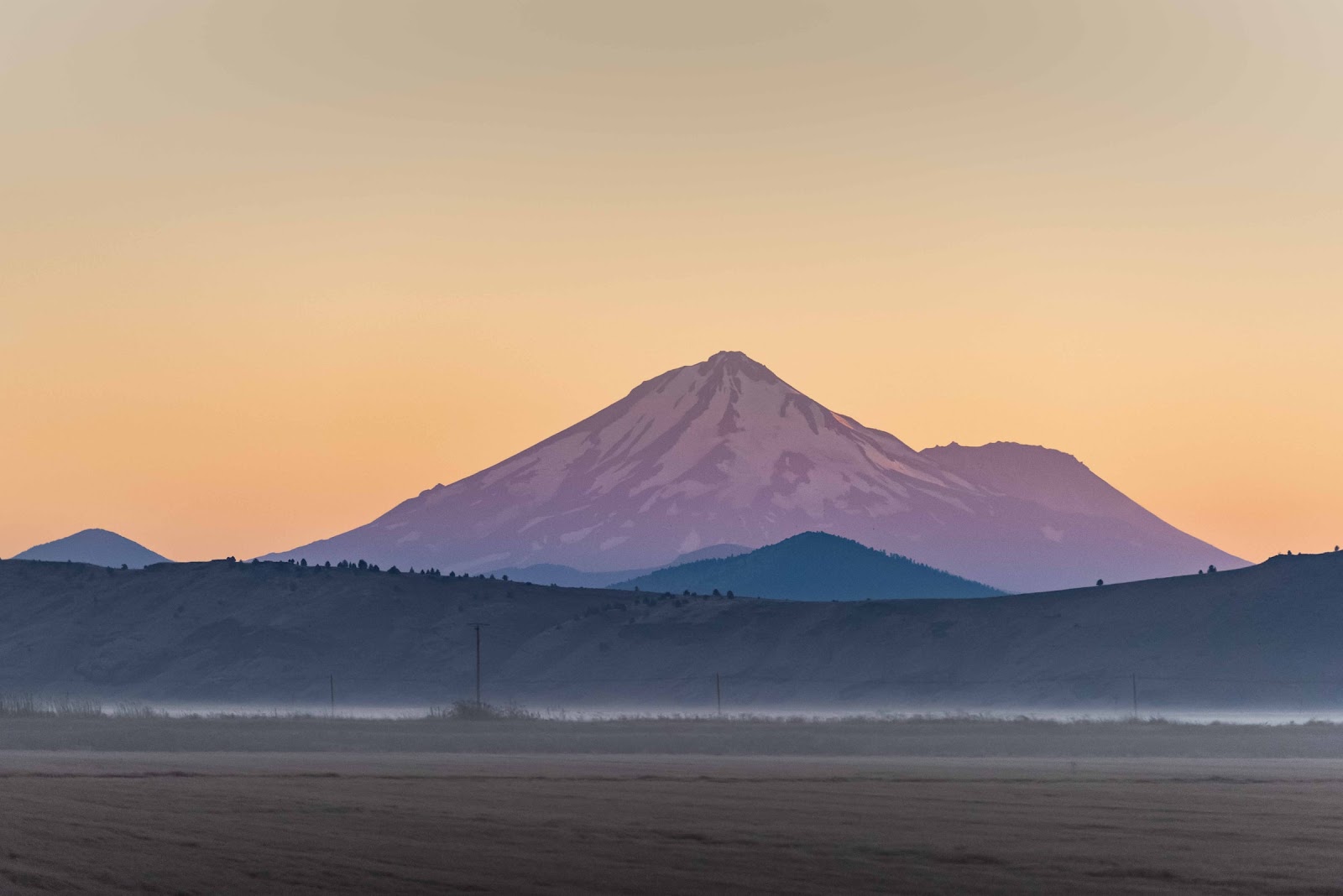 Driving along the Volcanic Legacy Scenic Byway, with Mt. Shasta looming in the dusk. – Richard Lee

Crater Lake National Park sits near the northern edge of the 500-mile Volcanic Legacy Scenic Byway, so why not make your stay at the park the start of a longer road trip through millions of years of explosive history?

Highlights are almost too numerous to list, but nevertheless include stops at Fort Klamath (the region’s first military post, established in 1863), Upper Klamath Lake (which attracts more than 350 species of bird), and the city of Klamath Falls (home to museums, farm-to-table restaurants, and other attractions). Keep an eye out for Mount Shasta, Mount McLoughlin, and other peaks towering over thick forests that line the route.

0 Comments on "Crater Lake Afterparty: An Adventure for Every Personality"