A Guide to the Year in Klamath Basin Beer

Indoors or out, there’s always something to keep you busy here in Klamath County. And, quite often, that “something” involves the local craft beer scene.

Klamath Falls hosts three outstanding craft breweries that, over the years, have become drivers of the region’s growing beer scene—both in their pubs and at fairs and festivals throughout the region.

Granted, you can’t exactly circle one specific date on your calendar for this one. But as the weather warms up around the Klamath Basin, breweries start producing seasonals best enjoyed after a day outdoors—whether that’s pedaling the OC&E Woods Line State Trail, hiking through the Sky Lakes Wilderness, or even mowing the lawn on a sunny Saturday.

Some of the seasonal styles to keep an eye out for include Kölsch, noted for a crisp and slightly fruity taste; IPAs, which can be bitter, citrusy, floral, or—most often—some combination of the above. You may also find the occasional gose, a slightly sour, if salty beer that commonly features smooth fruit flavors.

The Basin Brew & Q is one of the region’s most popular festivals and has a ton of fun summer activities. Discover Klamath

Kick summer off right at the sixth annual Basin Brew & Q, which happens each July. The event takes place at Steen Sports Park in Klamath Falls and brings together all your favorite summer activities to create one of the region’s most popular festivals.

Does it get any better than enjoying a sunny summer day with a grilled brat, good beer, and live tunes? Apparently not—the popularity of the Brats, Brews & Blues Festival proves that. Since 2001, this event has been a favorite summer pastime in Klamath Falls. It includes—you guessed it—an afternoon of blues music from local and regional musicians, a German bratwurst dinner, and beer tastings from all three Klamath Falls breweries.

Best of all, the Brats, Brews & Blues Festival raises money for a good cause: The event is a fundraiser for Camp Evergreen, a bereavement camp for children who’ve lost loved ones.

Enjoy the best in local live entertainment and craft beer without enduring the crowds at that other Oktoberfest halfway around the world.

Klamath Basin Oktoberfest—happening September, at Bill Collier Community Ice Arena at Running Y Ranch Resort—boasts a day full of family-friendly fun. Some of the region’s most popular food vendors will cook up a variety of cuisines, a beer garden will offer high-quality ales and lagers from all three Klamath Falls breweries and popular breweries from throughout Oregon, and live music from local bands will soundtrack the day. Children’s activities will be offered to keep the little ones busy and entertained.

The Pacific Northwest loves its hoppy beers—pale ales, IPAs, and so on. And there may be no better time to enjoy those hoppy beers than in September—right as fresh-hop season takes over the region. Near the end of every summer, hops are picked straight from the bine; from there, brewers toss those fresh, unprocessed hops into a beer-in-progress within 24 hours. The resulting beer is a juicy, full-bodied ale or lager—one that remains fresh and flavorful for only a few weeks before the season winds down by early October.

Once Labor Day Weekend comes and goes, keep an eye out at breweries and beer bars around Klamath County for their fresh-hop offerings; chances are good you’ll spend the next 11 months craving the fresh flavors. 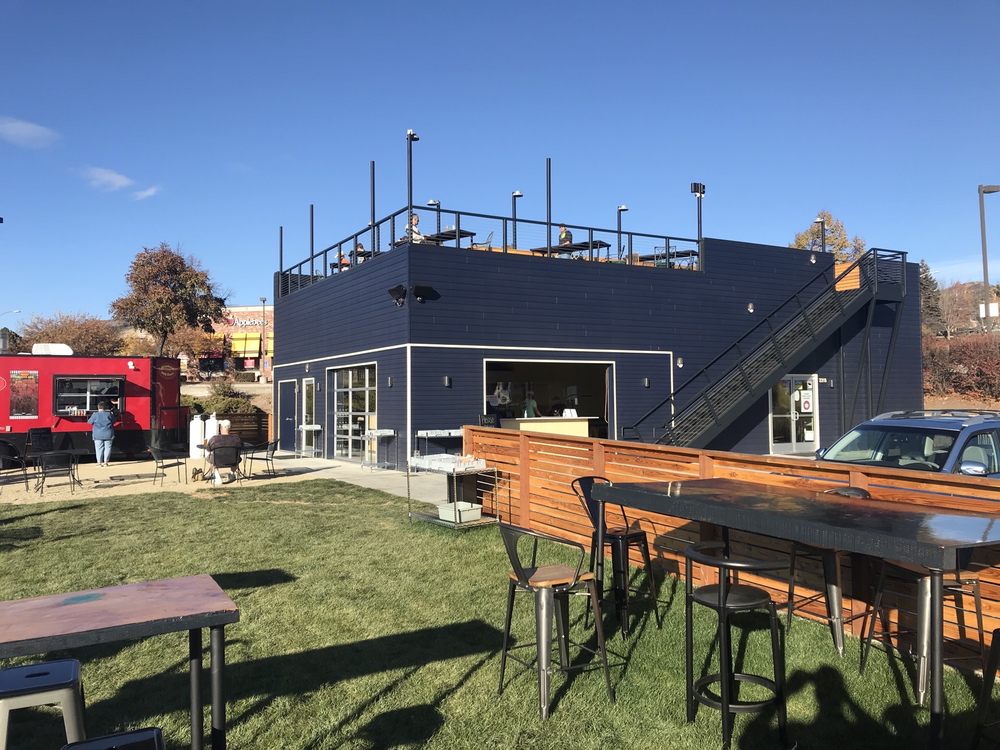 After helping friends launch Base Camp Brewing Company in Portland, OR, Krister Balme took his experience and moved back home to Klamath Falls to open the latest addition to the Klamath Falls beer scene—an all-new taphouse and food cart lot— The Falls Taphouse. With an open air concept including rooftop seating with views of gorgeous Upper Klamath Lake and the city of Klamath Falls, The Falls is the perfect place to grab a cold one with friends. They have 30 beverages on tap rotating a selection of beers, ciders, kombucha, wine, and nitrobrews, plus an excellent selection of canned and bottled beverages in their cooler. The taps include mostly West Coast beers that are sourced from independently-owned brewers, including Klamath’s very own breweries. Three food truck pads are located on the property for customers to have a variety of food options to enjoy with a pint.

Opening soon to serve thirsty patrons will be General Duffy’s Waterhole, a popular taphouse and food cart pod in Redmond, Oregon, is currently working to open its second location in the heart of downtown Klamath Falls. When it opens, the pavilion will offer year-round food and beverage options—indoors and out—along with fire pits, cornhole fields, a stage for live performances, several food options, and more.

The growing beer scene and multiple brew-specific festivals make Klamath County a great stop on any beer lover’s adventure list. No matter what time of year you decide to visit, you are guaranteed fun and good beer. Cheers!

Written by Matt Wastradowski for Matcha in partnership with Klamath Visitor and Convention Bureau.