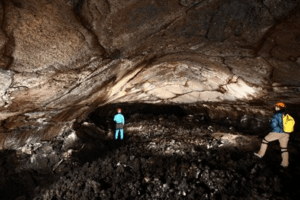 Lava Beds National Monument: one of the premier attractions of Southern Oregon and Northern California. This rough and rugged landscape has much to offer and experience for any thrill seeker. Yet you may be wondering how best to spend your time here or what has caused this incredible phenomenon. To help you as you navigate the wondrous area that the Lava Beds National Monument covers (and make sure you’re prepared for all the fun), we have compiled a go-to guide of everything you will want to make note of visiting. Let’s go explore the Lava Beds National Park!

Like many of the landforms you will find in Southern Oregon and Northern California, Lava Beds National Monument is steeped in historical significance. Over the course of the last half-million years, volcanic eruptions have impacted this landscape harshly.

The Lava Beds National Monument lies on the northeastern flank of the Medicine Lake Volcano. It occupies the largest total area that is covered by a volcano in the Cascade Mountain Range. The Lava Beds are in a highly significant physiographic location, lying at the juncture point of the Sierra-Klamath, the Cascades, and the Great Basin.

While here, you will find Petroglyph Point, one of the largest panels of Native American rock art in the United States.

Historically, this region was occupied by the Modoc people and saw the Modoc War which lasted from 1872-1873. During the Modoc War, a band of warriors led by Kintpuash/Captain Jack, used their knowledge of the lava bed area to mount a defensive stronghold. They were resisting being captured and returned to the Klamath Reservation.

Following this in April of 1873, a peace commission meeting went awry when Captain Jack killed General Edward Canby, which would also result in the death of Reverend Eleazer Smith and wounding two others. This mistaken attempt made by the Modoc people had them believing that Americans and the Army would leave if their leaders were killed. Instead of the Army leaving, reinforcements were sent and the Modoc were forced to surrender. Captain Jack and his main associates were later convicted of war crimes and executed by hanging at nearby Fort Klamath.

The Lava Beds National Monument construction also features an interesting history. During the Great Depression, many National Parks benefitted from work done by Civilian Conservations Corps crews. From 1935 to 1942, hundreds of Civilian Corps boys constructed the majority of the original infrastructure that is the Lava Beds National Monument. To this day, much of what they constructed can still be driven on, walked on, as well as appreciated nearly seventy years later.

The Lava Beds also have a history of interesting people who have visited the site. Early explorers and adventurers of the area include J.D. Howard, a homesteading family that was known for running sheep and an underground ice skating company, and various sets of moonshiners who set up in the caves during Prohibition.

As the Lava Beds National Monument is known for its many odd and intriguing structures, let’s go over some of the many things you will see while here. You will find cones, lava flows, lava fields, and lava tube caves. With a wide arrange of geologic formations that vary in ages, some being quite old and others relatively young.

For example, the Eagle Nest Butte and Bearpaw Butte cones are estimated to be the oldest at the Lava Beds at 114,000 years old. The Schonchin Butte and its andesitic flow were formed around 62,000 years ago. The Hippo Butte, Three Sisters, Juniper Butte, and Crescent Butte cones are all estimated to be around 30,000-40,000 years old. The Mammoth and Modoc Flows are estimated to be just under the previous amount. Two of the closest estimated are the Valentine Cave at 10,850 years ago and the Fleener Chimneys’ Devils Homestead flow at 10,500. Other younger cones are Black Crater at 3,025 years ago and Callahan Flow at 1,100 years ago.

Each of these falls under one of the different types of geologic formations. Let’s take a quick look at the difference between all of these.

There are two types of cones you will find at Lava Beds National Monument, cinder cones and spatter cones. The most abundant here are the cinder cones. There has been a lot of eruption activity in the past which has attributed to the formation of these cones.

Cinder cones are known to be formed after magma is put under extreme amounts of pressure which causes it to be released as a fountain of lava which as it cools forms cinders that pile up around the central vent it was blown out of. After the pressure has been eased or released, the remaining lava forms the base of the cone. The most notable examples of cinder cones at Lava Beds National Monument are Juniper Butte, Hippo Butte, Three Sisters, and Crescent Butte.

Two great examples of spatter cones, which are differentiated by being built from thicker lava than cinder cones, are Fleener Chimneys and Black Crater.

Over two-thirds of of the lava in Lava Beds National Monument is made from Mammoth and Modoc Craters. There are a total of around 30 different lava flows within the grounds of the Lava Beds National Monument. The main lava flows you will want to see are: Callahan Flow, Schonchin Flow, Mammoth Crater Flow, Modoc Crater Flow, and Devils Homestead Flow.

The main difference between a lava flow and a lava field are that lava fields are lower nearly to the point of flaw laying lava flows. At the Lava Beds National Monument, a great example of this is located at Gillem Bluff. Since this lava flow is estimated to be 2 million years old, it has many layers on top of each other.

The lava flow that was created by Medicine Lake Volcano known as the Basalt of Hovey Point, located near Captain Jack’s Stronghold is considered to be the oldest. Petrograph Point is another great example to go see.

The majority of the lava tube caves you will find at the Lava Beds National Monument are believed to have been formed 30,000 to 40,000 years ago. They were created when hot basaltic lava flowed downhill, and as the top cooled and crusted over it began to insulate the rest of the lava which formed lava tube caves.

You will also get glimpses in the cave of lavaciles. These were formed on the ceiling of lava caves when the vicious lava began to drip as it cooled. Dripstone, which you will also find in many of the caves was formed when lava splashed on the inside of the cave.

While visiting the Lava Beds National Monument, keep in mind that they boast the largest concentration of lava tubes in North America. Because of this, the caves are perfect for exploring. While exploring the caves you will find a variety of difficulties and environments to explore. The caves are all rated on a scale of least, moderate, and most challenging. They are classified this way to help you pick out which cave is best for you to explore. Some of the caves have been modified with this in mind, by adding electrical lighting or collapsed parts of the ceilings. Always remember when exploring the caves to wear several layers as the caves can be cool, wear closed-toe shoes to protect your feet, bring a good flashlight, and bring something to cover your head. This is to ensure that you have the best possible experience while exploring.

Flora and Fauna of the Lava Beds

As the Lava Beds National Monument is a wilderness location, you will find a wide variety of plant and animal life that make their home in the Lava Beds. You may even get rare glimpses of some of the more elusive ones if you’re lucky.

Due to the immense and intricate lava tubes, much plant growth has developed in the Lava Beds National Monument.

There is a wide variety of different lichens and mosses to see. There is also a great variety in desert plants like desert sweet, purple desert sage, and yellow blazing star. You will also find an interesting array of ferns that make their home in the lava caves. For example, you will find spreading wood fern and the western sword fern.

While the Lava Beds National Monument is known to thrive on semi-arid conditions, many types of animal life have found their way to thrive and adapt to those conditions as well. While water may be limited in the Lava Beds, many animals find water within the lava caves, or fly to other locations. Due to the lack of water in the Lava Beds, amphibians are limited to the existence of just the Pacific tree frog. The main types of reptile life you can glimpse are the northern sagebrush lizard, Great Basin fence lizard, western skink, Rocky Mountain rubber boa, gopher snake, desert night snake, and the western rattlesnake.

Other types of animal in the Lava Beds National Monument live based on the habitats they are afforded. In the lake shore areas you can find skunks, racoons, great horned owls, and short eared owls. In the bunch grass-sagebrush grasslands there are kangaroo rats, yellow-bellied marmots, mule deer, prairie falcons, Anderson’s larkspur, western meadowlark, and the coyote gopher snake.

Within the caves and passages, there are swallows, bats, pikas, and rats. At the lava flows are the lizards and rattlesnakes. In the pine forested areas you will find mountain lions, golden-mantled ground squirrel, and even bald eagles in the winter time. The ponderosa-juniper brushlands have jackrabbits, bobcats, pronghorns, scrub jays, and mountain bluebirds.

Many people every year journey to the Lava Beds for a unique outdoor experience. There are 13 established hiking trails for you when you visit to help you take in the Lava Beds National Monument in the safest way possible.

The majority of the popular trails are shorter in length and lead to historic sites within the Lava Beds. The longer trails are located in designated wilderness locations.

Lava Beds National Monument continues to be a place of great geographic significance and excitement. Every year, people journey to this rugged landscape for a look at the past and how the land continues to be shaped into the future. Whether you choose to partake in caving, observe the flora and fauna, or even hike around the Lava Beds, you will find something to catch your eye everywhere. And when better to visit Lava Beds National Monument then on your trip to Southern Oregon. Be sure to get some great photos of your adventures as well. Good luck adventuring in the Lava Beds wilderness!