Klamath Falls was originally founded in 1867 with the name Linkville, after the nearby Link River. The name was changed to Klamath Falls between 1892 and 1893. The word Klamath is derived from the indigenous people that lived on the land. While the word is not actually thought to be of the language of the people, it has come to symbolize them.

The local Klamath people referred to the region by the Link River. Since it was an odd phenomenon as it would flow upstream when the south wind blew. The Klamath word for the phenomenon, Tiwishkeni, loosely translated meant “where the falling waters rush”. It was from this that the word Falls was added to the name, Klamath Falls. Klamath in reference to the people and Falls in relation to the Link River phenomenon.

So… where are the waterfalls? 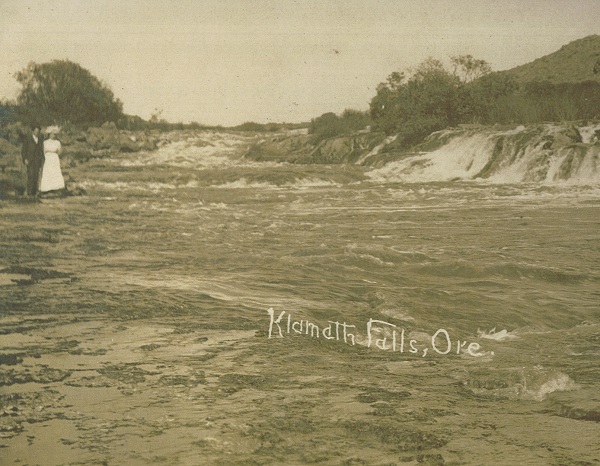 The falls of Klamath Falls are more of a cascading fall or water rapids along the Link River that can still be glimpsed today. During much of the year, you can see a set of whitewater rapids along with one or two cascading waterfalls along a ledge on the east side of the river channel. For the best views, we recommend visiting in the spring, when water from the Upper Klamath Lake overflows and makes the rapids more noticeable. While the falls may not be what you immediately consider a waterfall, when you do glimpse the falls of Klamath Falls, you can easily see how they received their name.

Plus, just a short drive away, you’ll find loads of other beautiful waterfalls to visit. In fact, here are a few of what we consider to be the most picturesque waterfalls near Klamath Falls.

Clearwater Falls is located in the Umpqua River Drainage system, and is one of the most unique waterfalls you will encounter while in Southern Oregon. This particular waterfall near Klamath Falls is truly a sight to behold as it is spring-fed and gives the illusion that it originates from in multiple locations straight from the ground.
While Clearwater Falls features only a brief 29 foot cascading fall, it is the way that this waterfall interacts with its surroundings which makes it remarkable. The ground around the falls is covered in a soft soil with a wide array of intertwined roots that allow for water to manifest out of the ground. This gives it the image that it springs out of the ground.
Clearwater Falls, being a spring-fed waterfall near Klamath Falls, is one of the most consistent water flows you will find. Regardless of what time of year you visit, the rush of the falls should remain the same because of this.
Clearwater Falls is also one of the most photographed waterfalls near Klamath Falls because of the nearly limitless options of how to capture this incredible bubbling waterfall. 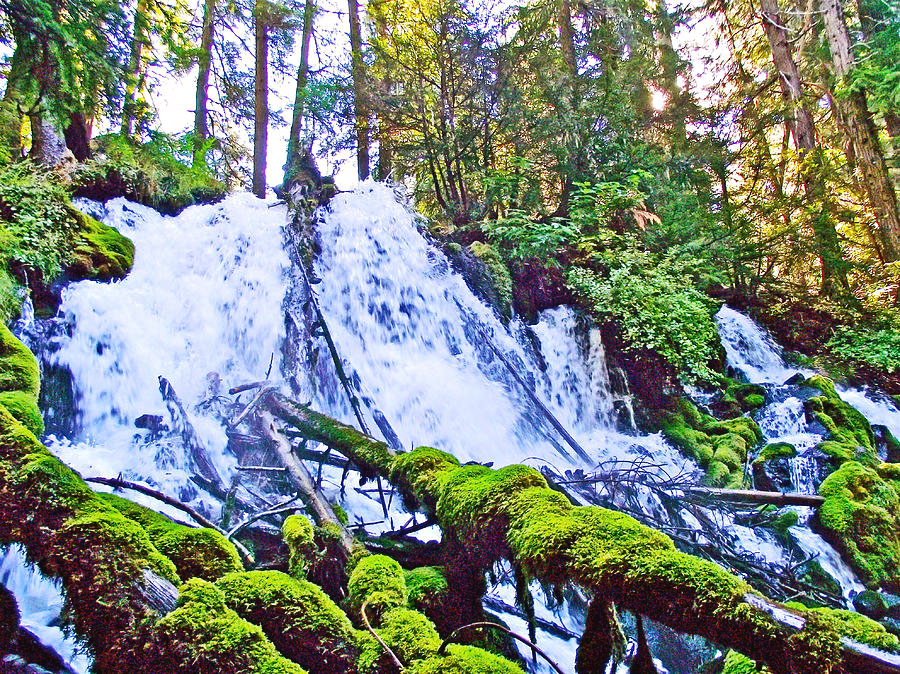 For the second waterfall near Klamath Falls you should be sure to visit, we would recommend Watson Falls. Located on Watson Creek, hence the name, Watson Falls is a 272 foot drop waterfall. You will find Watson Creek, a tributary of the Clearwater River about an hour and a half away from Klamath Falls. But this waterfall is definitely worth the drive.
Known for being the third highest waterfall in Oregon, and the highest waterfall in southwestern Oregon, it offers a stunning and mesmerizing view. While observing Watson Falls you will notice how the water cascades over basalt lava cliffs, as it falls to the pool below. One little known feature of this waterfall is that you can even walk underneath it and get a different backside view.
You will have to take a minimal 0.6 mile trail to reach Watson Falls. For ease, there is a footbridge that is 0.3 miles from the trailhead. This brief trail is not too difficult and for any difficulty you experience is made up when you arrive at the waterfall. Watson Falls is truly a picturesque waterfall near Klamath Falls. The best times to stop by this waterfall are recommended between April and November. 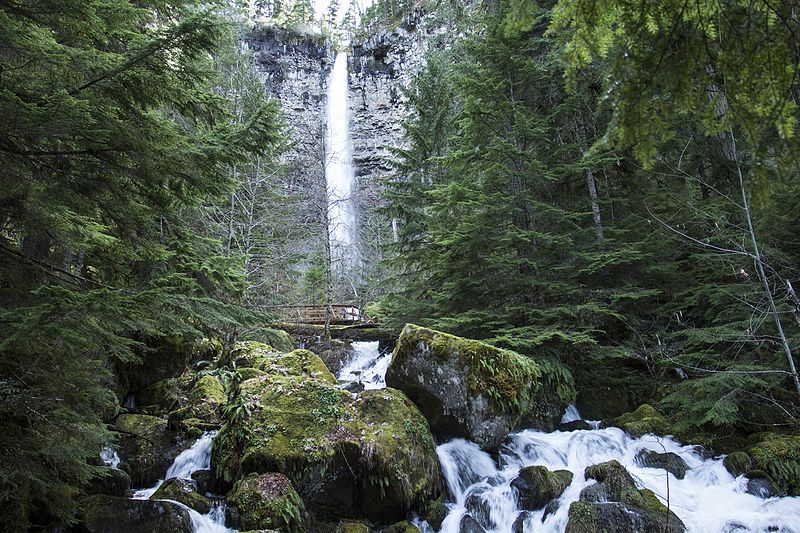 The next waterfall near Klamath Falls that you will want to catch a glimpse of is Duwee Falls. Located within Crater Lake National Park , Duwee Falls is considered to be the largest waterfall within the park. Many people consider Duwee Falls to be the best waterfall to catch a glimpse of while in Crater Lake National Park, and since Crater Lake is under an hour away from Klamath Falls, it’s an easy one to get to.
Many people wonder how this waterfall got its name. Upon investigating the etymology of the word duwee, it loosely translates from the native Klamath language to mean ‘the sound of a rushing stream and/or cascade.’

It actually features a series of plunges: an initial 15 foot plunge, followed by a 40 foot plunge, and then splits where it cascades over two separate tiers for 25 feet each. It is highly recommended to get the best view of Duwee Falls, to stop along the pullout on Highway 62 by Mazama Village. This particular waterfall near Klamath Falls truly lives up to the excitement of seeing a complex picturesque waterfall. 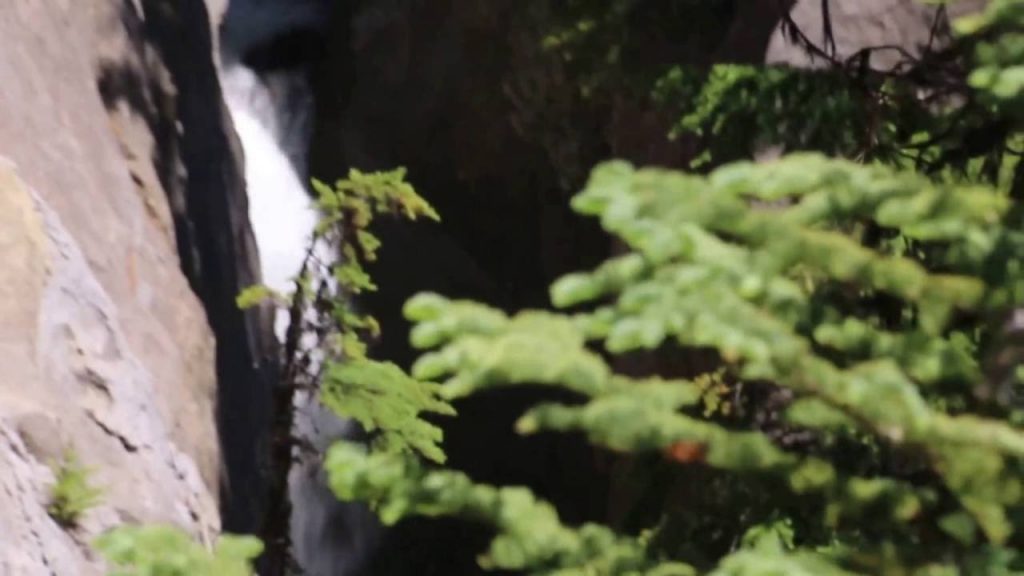 You will find Toketee Falls located on the north Umpqua River where it converges with the Clearwater River.
Toketee is another interesting word – many people wonder about its meaning. Looking into the etymology of the word toketee translates from Chinook jargon and means “pretty” or “graceful.”

That is certainly one of the best ways to describe this waterfall.

Toketee Falls features a series of plunges. The first plunge drops 113 feet, followed by a 28 foot upper tier that it drops into and lastly another 85 foot drop that culminates in a larger pool.

Toketee is known for its columnar basalt formation which make it one of Oregon’s most famous waterfalls.

An interesting fact about Toketee Falls is that it is regulated and monitored by a dam built upstream by PacifiCorp which reduces water flow. This work by PacifiCorp has created the Toketee Lake reservoir.

This waterfall near Crater Lake is an hour and a half drive from Klamath Falls and pays off with it’s incredible views. Be sure to stop here. 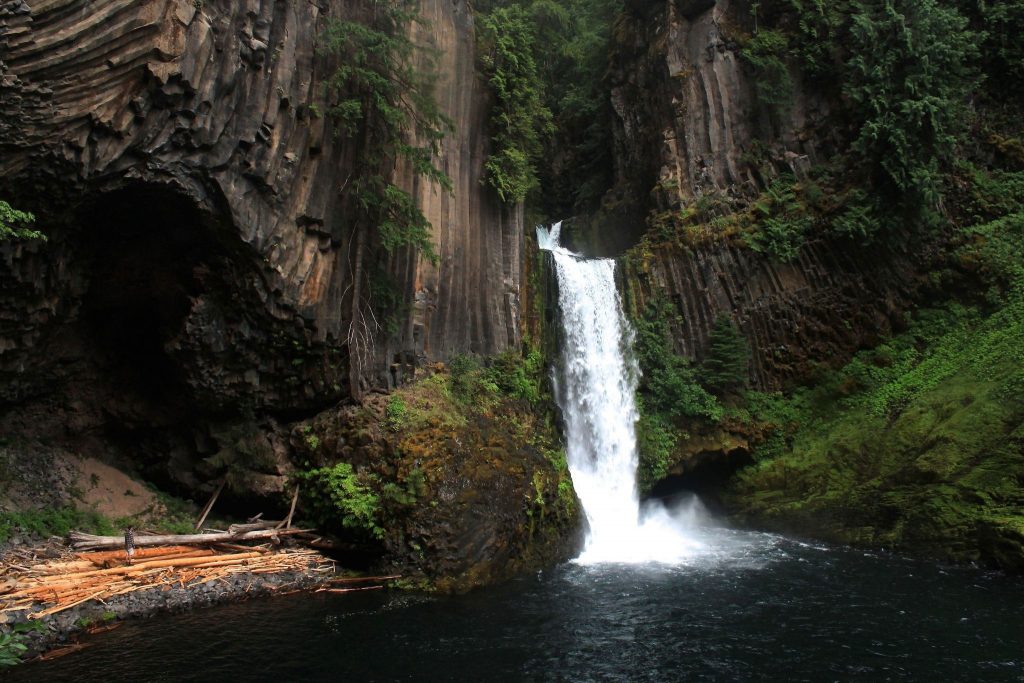 Much like with Duwee and Toketee, Plaikni is another native word. When looking at the etymology of the word plaikni it loosely translates to “from the high country.” Plaikni Falls is named this way because of how the waterfall is situated along the slopes of the destroyed Mount Mazama.

Plaikni Falls features a trail for you to hike that was opened in 2011. For a further translation of the Plaikni Falls name and origins, there is a sign at the trailhead that reads, “The high country receives an average yearly snowfall of 44 feet, and this melting snow percolates through loose volcanic soil, hits an impermeable layer, and surfaces as a spring. One spring forms Sand Creek, which cascades down as Plaikni Falls.”
Plaikni Falls is one of the most beloved waterfalls near Klamath Falls as it is easy to get to and one of the most well know. It is surrounded by wildflowers on both sides making it a tranquil view. 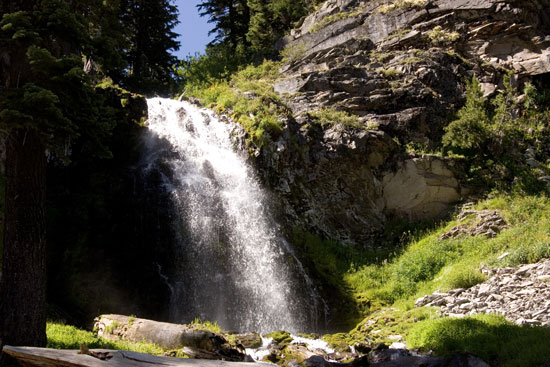 Visiting Klamath Falls during winter? Check out this article !