Visiting Crater Lake is a must when going to southern Oregon, but there are many other fabulous attractions to explore while there. Crater Lake has many hidden offerings in and around the national park that you will want to add to your itinerary. The stunning view points around Crater Lake can oftentimes be crowded during the summer season, leaving many areas unexplored. To help you sort out some of the best offerings, we have put together 6 attractions near Crater Lake.

The Crater Lake Zipline nestled in the Fremont-Winema National Forest is an interactive option for all those who love an adventure. Located 40 minutes away from Crater Lake, this thing to do near Crater Lake will keep you entertained all day long.

The Crater Lake Zipline is Oregon’s longest zipline series and the only one that traverses a National Forest in the entire United States. This adventure is guided and will take you approximately 3 hours to complete. While doing this, you will see outstanding views of Mt. McLoughlin, Upper Klamath Lake, and the nearby Cascades.

With 9 ziplines, 2 rappels, and 2 skybridges, this high flying adventure will keep you spellbound. Groups of 10 will be escorted along the zipline by a trained guide that will make sure they are educated on zipline etiquette and safety before they begin.

There is even a smaller zipline course, Sasquatch Hollow, for the little adventurers that don’t meet the weight or height requirements for the bigger one. The check-in location remains the same for both.

Be sure to follow all of the rules set before you and listen carefully to your guide so you can make the most of this fun adventure. Of attractions near Crater Lake, this is definitely one for the whole family to enjoy.

If you are looking for some hiking attractions near Crater Lake, we would recommend taking the Union Peak trail. This 11 mile hike will offer some of the best cumulative views of southern Oregon.

The view from the summit of Union Peak offers glimpses of the Crater Lake Rim, the Klamath Basin, Mount McLoughlin, and Mount Shasta.

You will need to start out on the Pacific Crest Trail (PCT) for a few miles before a sign points the turn to Union Peak trail. The Union Peak trail offers a moderate hike that steadily increases uphill. While the last half mile can be more difficult, it truly pays off with the stunning views. The trail is well constructed overall, so you shouldn’t struggle along it.

The trail isn’t usually crowded as it lies outside the Crater Lake National Park entrance. You can feel one with nature while not encountering too many other hikers and hike at your own pace. Plan for a few hours to complete the trail because of the length.

The trail typically features snow along it from the months of October to early July, though conditions may vary from year to year. For a unique hike with outstanding views of southern Oregon, head on over to Union Peak, you won’t regret it! 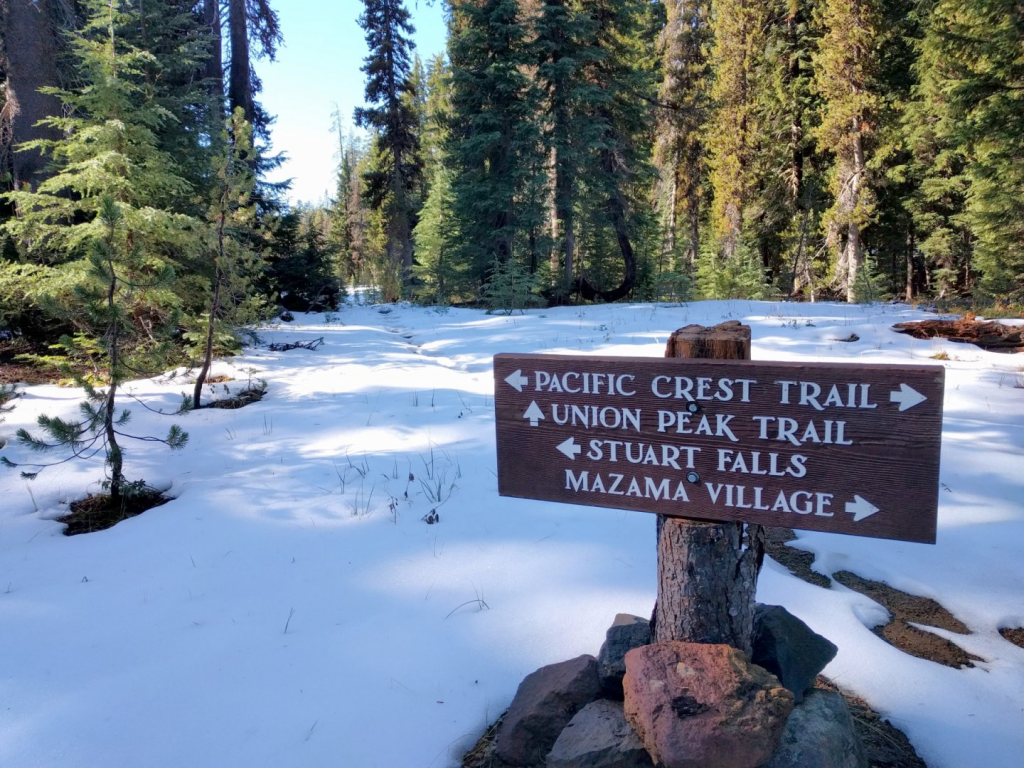 If you want to see a geological attraction near Crater Lake, consider stopping by the Pumice Desert. This feature is located within Crater Lake National Park and definitely an awe-inspiring place.

The Pumice Desert is in the northern section of the Crater Lake Park and is considered to a be a broad flat. When Mount Mazama collapsed, the area that is the Pumice Desert was covered with pumice and ash more than 200 feet deep. It has only recently begun to be occupied by a scattering of lodgepole pine. Due to the lack of organic matter, very few plants have been able to take hold to enrich the soil.

The Pumice Desert provides a stark difference to its surroundings. This barren, flat area of 5.5 miles stands out among the predominantly lodgepole pine forests.

Since the parks induction in the early 20th century, this area has provided an endless stream of questions prompting numerous studies and research.

This area that is heavily steeped in geological significance is an ideal spot to spend some time while visiting attractions near Crater Lake. 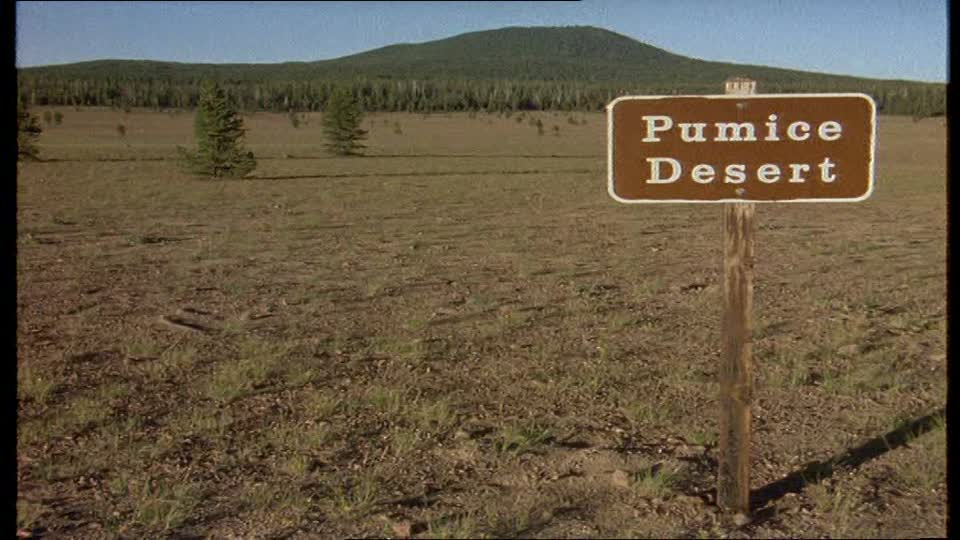 The Jackson F. Kimball State Recreation Site near Crater Lake is located approximately 20 miles from the national park. This site is forested with ponderosas, lodgepoles, and quaking aspen. The park was established in 1955 and covers 19 acres, including the Wood River headwaters.

The park was named after a district forest warden for the Klamath-Lake Forest Association in the early 20th century.

While visiting Jackson F. Kimball State Recreation Site, you can camp or picnic while enjoying various water activities. Many visitors take advantage of the great fishing in the Wood River, canoeing, and kayaking. For fisherman, you can find Brook, brown, and rainbow trout in the area. There is a short trail that connects the main campground to the headwater’s location. The park features ten basic camping sites with the lagoon at the headwaters.

The Jackson F. Kimball State Recreation Site is usually open from mid-April to October, weather permitting. This is due to winter weather conditions, but varies year by year.

The Jackson F. Kimball State Recreation Site is a great attraction near Crater Lake to spend a day with the family while in southern Oregon. 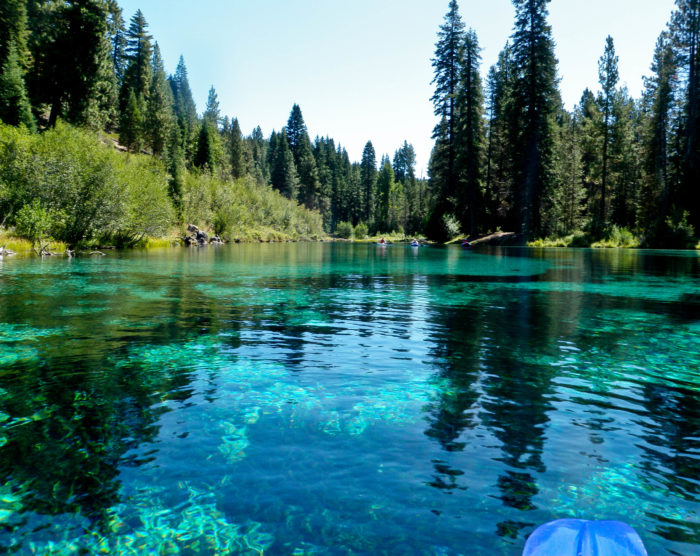 The Three Lakes Sno-Park is a great attraction near Crater Lake for the winter time. This area provides an ideal location for downhill skiing, cross country skiing, snowmobile riding, and snowshoeing.

You can get the most updated maps for Nordic and snowmobiling from the Diamond Lake Ranger District. Nordic skiing in the Three Lakes Sno-Park includes the 2.3 mile Silent Creek Trail and the 3.6 mile Hemlock Butte Trail. You can also snowmobile the first two miles of the Hemlock Butte Trail until it reaches the Bailey Connect.

The Three Lakes Sno-Park is typically open from early November to late April. This winter playground can also be camped at for you to make a weekend of your snow adventures. Be aware though, it is a first come first serve basis with camping in Three Lakes Sno-Park.

This attraction near Crater Lake may see lots of traffic with so many other locations being closed for the winter season. Stop by Three Lakes Sno-Park for some winter fun in southern Oregon. 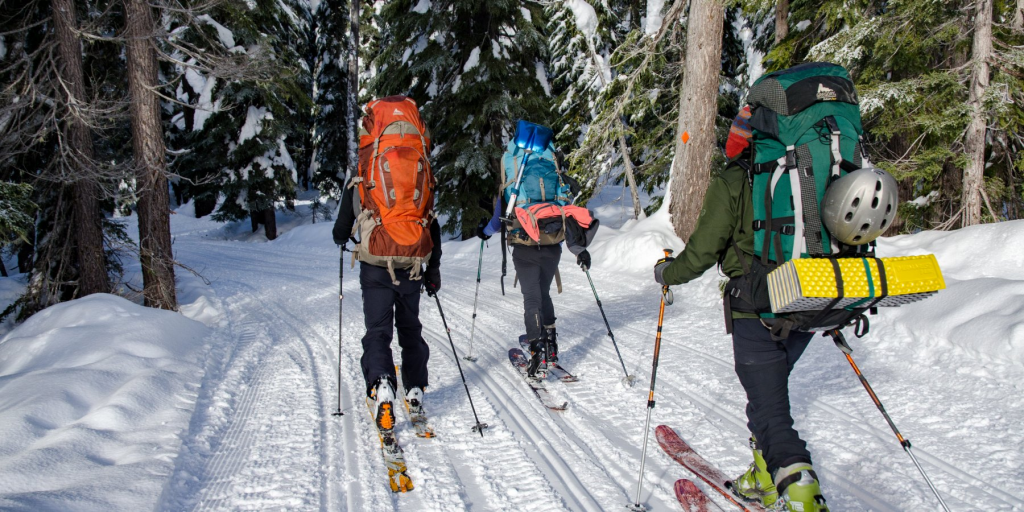 Much like the Pumice Desert in that it is a geological feature that has been shaped due to the collapse of Mount Mazama, the Pinnacles offer an entirely different sightseeing option.

The Pinnacles are located in the southeastern corner of Crater Lake National Park. These attractions near Crater Lake are a group of pumice spires, with varying colors of gray and brown, that were formed by erosion. Some of the cones you will see are extremely tall and sharpen to a point, whereas others are more slim.

Also known as fossil fumaroles, the Pinnacles are surrounded by the vibrant forests providing a stark contrast with their vegetation free appearance.

The best description of the Pinnacles is from one of the interpretive boards at Crater Lake National Park, where it says:

“The history of the Pinnacles began when the eruptions of Mount Mazama were reaching their climax 7,700 years ago. Floods of red-hot, gas-charged pumice poured down Mazama’s slopes at speeds reaching up to 100 mph (160 kph). In addition to pumice, flows of heavier rocks called Scoria also tumbled out. These glowing avalanches flooded down slope for miles, leaving deep deposits in their wake.

“Temperatures in the deposits may have exceeded 750 F (400 C). Plumes of vapors appeared, and gasses escaped from the settling rocks through vents called fumaroles. In the extreme heat, minerals in the gasses welded the sides of the fumaroles in the shape of slender cones. Since then, streams have eroded a canyon through the deposits, exposing the cones. Many of these fossilized fumaroles are hollow.” 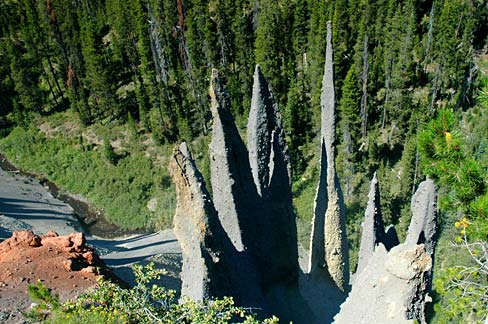 You can get some of the best views of the Pinnacles from overlooks at the end of the access road as well as along the Pinnacles trail that follows the valley. The Pinnacles hike is short in length, but due to popularity among visitors can be busy. Most times you should not have to deal with large crowds.

NOT TOO FAR FROM CRATER LAKE

Whether you choose to take advantage of the Crater Lake Zipline or prefer to see geological wonders, the area surrounding Crater Lake has attractions for everyone. Head over to any of these locations for a great addition to your southern Oregon trip. 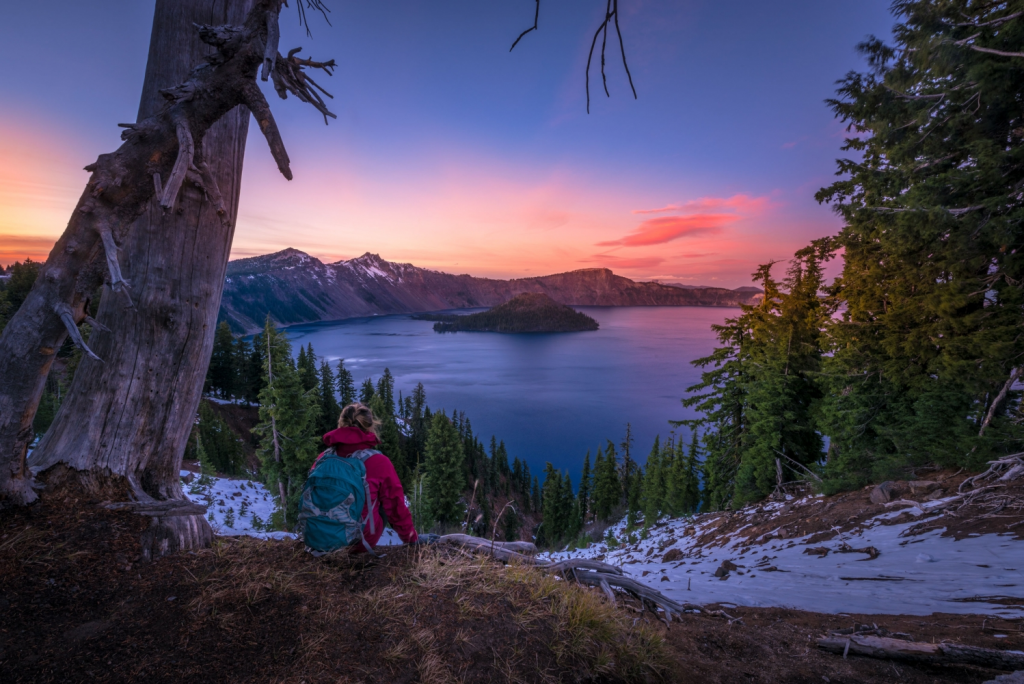